Why does energy flow downhill/entropy increase?

I'm not sure if this is asked anywhere else before, but so far my search isn't fruitful.

I'm in my second bachelor of physics and mathematics, and currently taking a thermodynamics course. We just got introduced to the second law and entropy, but I am confused by its deeper meaning. I understand that entropy always increases and in our course text (An introduction to thermal physics by Daniel V. Schroeder) this is explained by microstates of a system. I understand that systems with more 'disorder' have a higher chance of occuring than systems with a lower disorder. The thing that bothers me right now is why nature obeys this statistical argument. Just because combinatorics says a certain configuration is more likely doesn't imply that nature will develop to that situation.

My question is: why does a system tend to a configuration with more disorder.

I've read on several pages that this is because 'energy flows downhill'. I can see how this solves my question, because if the energy flows downhill, then it's quite easy to see that the result is a system with energy more spread out, a system with more disorder. But then again why does energy flow downhill? What drives the fluid of energy between systems? On some internet pages, the answer to this question is 'because entropy increases', but this brings us back to the original problem.

In conclusion: why does energy flow downhill or why does entropy increase, explained on a fundamental level.

I thank you in advance.

My question is: why does a system tend to a configuration with more disorder.

Try to think it in this way:

As far as I got your question your problem is with the point $2$. Why is it valid? It's an hypothesis, called hypothesis of equal a priori probability. So why should we trust this hypothesis? Because it works, that is after you do such hypothesis you study the consequences of this hypothesis and then compare them with the experiment. If the experiments are consistent with it, it means that your hypothesis was a good one.

Addendum after the comments: Notice that the system can even change its microstate arriving to ordered configurations, that's not forbidden, it's just not likely. Maximum Entropy doesn't mean that the system always ends up in the most disordered microstate. Entropy is, roughly speaking, the number of the accessible microstates for the given system, so the bigger this number is and the bigger the entropy is

I'll give a hypothetical example in which entropy decreases.

I assume you have some familiarity with phase space - plots of the position versus momentum of a system. If not, this Wikipedia article has good illustrations.

Suppose the phase space for some system has an attractor, meaning all the paths tend to go to one spot. 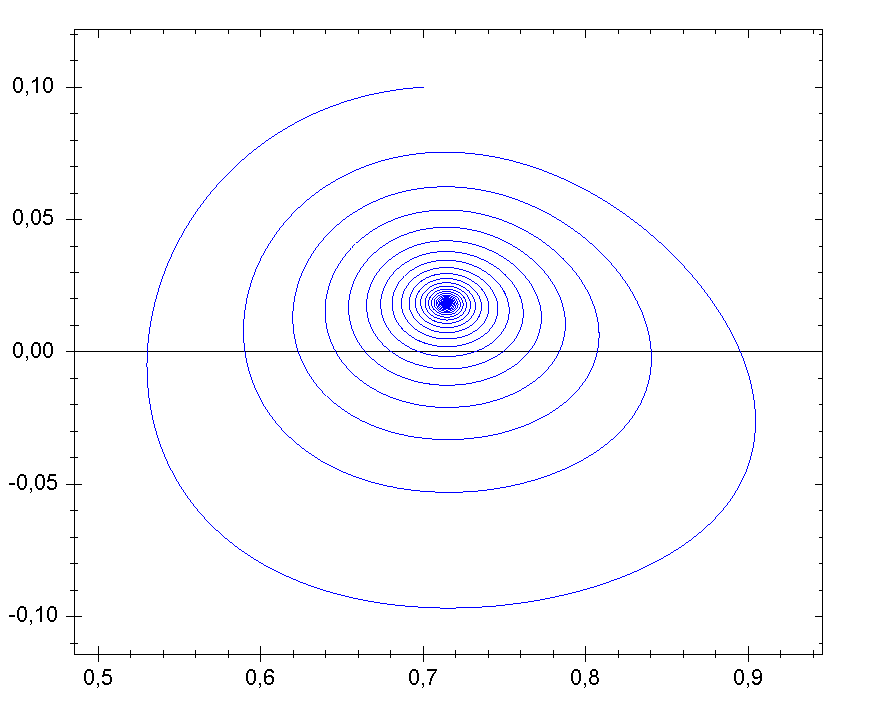 Physically, you could think of a harmonic oscillator with some damping. No matter the initial trajectory of the oscillator, it always settles down to its equilibrium position.

In a universe where the fundamental laws physics behave like that in phase space, entropy could decrease and the second law would be false. The reasoning is simple. Suppose the macrostate is something like "the energy of the oscillator is between $E$ and $E + \mathrm{d}E$". The possible states (i.e. "number of microstates") of the oscillator would be a thin circular ring on the phase space diagram, and the entropy would be a function of the area of that ring, called the "phase space volume".

Then as time goes on, the energy of the oscillator would go down and the ring would get smaller, eventually becoming just a dot. The phase space volume would decrease. Then the number of microstates corresponding to the macrostate would have gone down, and the entropy would have decreased.

The reason this doesn't apply to our universe is that the fundamental laws of physics have a special form. In fact, at the fundamental level, there is no such thing as damping. Of course, in real life, we can build a damped oscillator. But in order to do that, the oscillator needs to be interacting with something else; maybe there's friction from some rubbing. And that friction heats up the molecules in whatever the oscillator is rubbing against, increasing the energy and the phase space volume over in that system. So whenever we decrease the phase space volume in one place, we wind up increasing it even more somewhere else.

The laws of physics actually say that if you have an isolated system, the phase space volume is constant. This is Liouville's Theorem, or in quantum mechanics, unitarity.

In a universe where this were not true, entropy could decrease.

As stated in previously posted answers: the reasoning is probabilistic.

I remember reading about an extremely simplified model, I think by Peter Atkins.

Given that initial state, start swapping pairs of adjacent cards randomly. Over time the separated state will evolve to a state where closed and open cards are present in the entire 10 by 5 array. The driving effect is that the pairs are swapped randomly.

Actually, it's important to think of the move towards largest probability as distinct from moving down an energy gradient.

An example of 'moving downhill' would be geologic erosion. Over geologic timescales mountains erode. Unless there is some plate tectonics moving things up any landscape features will tend to flatten over time.

However, and this is crucial to be aware of, there are cases where an increase of entropy can cause movement against an energy gradient.

One example of that is osmotic pressure

Let's take the mose usual case: water as the solvent. You have a membrane that is permeable to water molecules, but not permeable to larger molecules that are dissolved in the water.

The expression 'energy flows downhill' is intended to capture a probabilistic effect. If you drop an object from some height then just prior to impact the object has significant kinetic energy, which is low entropy energy. On impact that kinetic energy becomes heat. Heat is a form of kinetic energy too (velocity of the atoms/molecules that the object is comprised of), but heat is a higher entropy form of energy.

Energy is always conserved, but probability constrains it to only move in the direction of increasing entropy.

The idea of energy "flowing downhill" is not a bad analogy. It refers to the gradient. When I say that frost flows downhill, everyone knows what I mean - the lower parts of my fields are frostier than the higher parts. When I say that water flows downhill, people also know what I mean. One is a movement of air and the other is the movement of a liquid. People understand I am describing a process, not a thing.

IANAP, but I seem to recollect learning an answer to the why of this based on symmetry-breaking. Real physicists may be better at explaining this than me.

The idea is simple to understand - a high energy state is held in an unstable equilibrium, and this will be probabilistically broken by perturbations that will lead to a more stable equilibrium. This can cascade, and as it does so, the universe is born...

All things want to have the lowest potential energy they can achieve . That is why when leave a ball from some height the ball starts falling ( it's gravitational potential is reduced ) .Entropy is how messy things are . When the universe began , the entropy was very small because all of the energy of the universe was in one particular point ( the singularity) . Now we have lot of entropy because things are messy . For example , when you go to a bar everyone is sitting and drinking so they entropy is low . But if a warmhead enters the bar and starts assaulting poeple , then the customers will defend themselvels , things will be broken and the bar will be more messy.