The validity of the Longitude of Perihelion

Im a mathematician, primarily. I dont understand the basis of this measure, the Long.ofPeri. This seems invalid to me. It may be used, but perhaps this is where some inaccuracy comes from in your predictions? Why use it at all if its invalid?

From mathematics/geometry, we learn that you CANNOT add two angles in the sort of way that we are apparently doing here. These two angles are in different planes. They are not parallel, and at their point of adjacency they split off in entirely different directions.

I prefer to use the Arg.ofPeri and the Long.ofAscNode separately. Conceptually it makes sense and the mathematics Im more certain about.

When applying Hamiltonian mechanics to the Kepler problem for the first time, a set of canonical angle-action variables was required. The first set, known as Delaunay elements, were defined in the 1860s. They are based on the argument of perihelion, the mean anomaly, and the longitude of the ascending node. Delaunay variables are singular for equatorial or circular orbits.

Orbital Mechanic's formulation is correct, but the usage is not limited to textbooks. For example, the third edition of the Explanatory Supplement to the Astronomical Almanac, in its "low accuracy" algorithm for locating planets in the solar system, gives formulas for mean longitude and perihelion longitude, but not for mean anomaly and perihelion argument, which have to be derived from the longitudes. The "non-angle" longitudes are published as a matter of widely accepted convention.

The correct answer to the question posed appears to be that the usage is a matter of established convention. Perihelion longitude (lowercase omega with overbar) and mean longitude (L) are published in ephemeris references, but perihelion argument (lowercase omega) and mean anomaly (M) are not. However, perihelion longitude and mean longitude are both sums of angles in different planes, so neither one of them can, by itself, be the argument of a trigonometric function. Instead, the ascending node longitude (uppercase omega), an ecliptic plane angle, must be subtracted from the published perihelion longitude to yield the perihelion argument, a purely orbital plane angle, and the ascending node longitude must be subtracted from the published mean longitude to give the mean anomaly, also a purely orbital plane angle. The mean anomaly is used with the orbital eccentricity to give the eccentric anomaly, which is used with the eccentricity to give orbital plane coordinates, which are then used with the perihelion argument, the ascending node longitude, and the orbital inclination angle to determine the planet's ecliptic coordinates. The reference is Standish E, Williams J. Chapter 8 pp 338-341; Rohde J, Stollberg M. Chapter 9, pp 347-348; in Urban S, Seidelmann P (eds). Explanatory Supplement to the Astronomical Almanac, 3rd ed. 2013: Mill Valley, CA. University Science Books. The basic formulas for the relationships discussed in this answer follow. 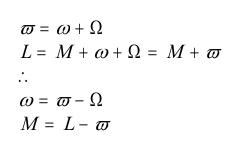 Yes, it's mathematically meaningless to add angles in separate planes--after all, given one of these sums, how could we ever know how much of it came from each plane? The longitude of perifocus and the mean longitude are both examples of this meaningless sum, and perhaps their beginnings lies buried in the depths of history. It's perhaps only due to tradition (and listers of orbital elements such as NASA's JPL) that their use continues.

I suggest that as soon as you see a nonsense angle, extract a mathematically well defined angle from it and use that. So, given the ill-defined longitude of the perifocus and the ill-defined mean longitude, convert them to meaningful angles as follows:

Using the ill-defined angles benefits no one: they don't speed computations up, they don't make anything more elegant, and they don't make the subject easier to learn. It's time they were removed from the textbooks.

Not the answer you're looking for? Browse other questions tagged astronomy orbital-motion or ask your own question.

6
How accurately is the moment of perihelion of Earth known, and how is it measured?
5
Convert ECI coordinates to latitude/longitude?
1
What are "cycles of anomaly" and "cycles of longitude"?
1
Perihelion Advance in curve space
4
Is the best data about Mercury's perihelion shift really 60 years old?
1
How to find the rising time of constellations at a specific longitude and latitude on earth?
1
Geocentric Ecliptic to Perifocal Coordinate Transformation
2
Sidereal time calculation from orbital elements and mean anomaly