Thes question has to be the other way: Why are thin bubbles colorful? A thick material like a window glass is colorless too.

Here is an image of a soap film which is thinner at the top than at the bottom due to the soap solution moving downwards under the influence of gravity.
The film is viewed using white light. 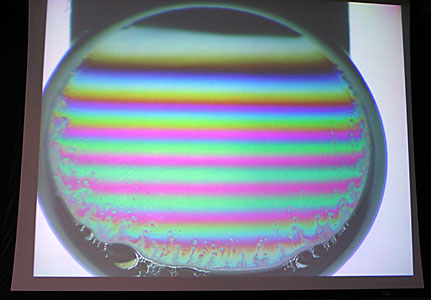 At the top the film is "balck" because there is no reflected light or rather the reflected light from the two surfaces which are very close together differ in phase by $\pi$ and so interfere destructively.

Lower doen the path length between the two surfaces is such that constructive interference can occur.
You will note that the colour of a fringe at the top is blue and it is red at the bottom because when going down the thickness of the film is getting larger and blue light which has a shorter wavelength than red light needs a thinner thickness of film to exhibit constructive interference.

This overlap of fringes for different wavelength becomes greater and greater as the thickness of the film gets larger and larger until eventually no fringe pattern is seen and the light which is reflected is "white".

Here is an image to show what would happen if only three wavelengths were present. 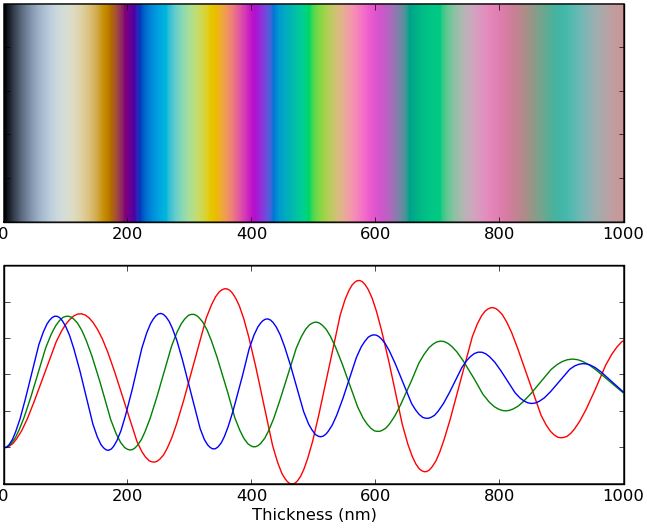 The other parameter which comes into play is the "flatness" of the surfaces of the object which is doing the reflecting.
Even a small deviation from flatness of a few wavelengths will affect the interference pattern that is observed.

Not the answer you're looking for? Browse other questions tagged optics visible-light bubble or ask your own question.

8
Is manufacturing roughness really the only reason we don't see optical interference in thick dielectrics like windows?
6
Why are thin soap bubbles colorless?

46
Explaining to a five year old - why don't bubbles run like water
5
Which balloon has the higher pressure and why?
6
Why are thin soap bubbles colorless?
4
What determines the lifetime of a soap bubble?
3
Why are the “bubbles” at the edges of my soup so large?
1
What keeps small mobile bubbles at the bottom of a kettle from rising
3
Why do soap bubbles seem to resist merging?
2
Inserting thick lenses into a thin lens system and deducing values
1
Why are very thick soap bubbles colorless?