When ever I see pictures like this of some object flying at speed greater than sound , I see triangular waves . So I got question in my mind that Do supersonic objects weather its bullet or aircraft feels less air resistance compared to what they feels just before going supersonic..? This question might be too silly ,But I really get this question in my mind and I'm keen to know does it really happen or not. 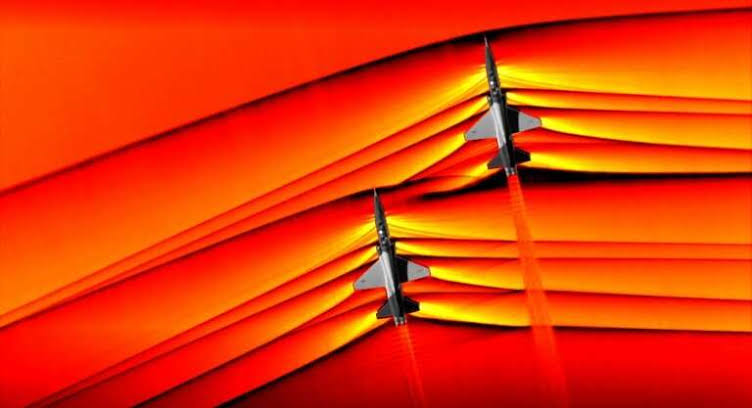 No, it doesn't. Especially when the comparison is between supersonic and a subsonic speed markedly smaller than the speed of sound.

In order to have a fair comparison, it would be advisable to reduce air density with the increase in speed squared. This way, aerodynamic forces will be of the same magnitude, and especially lift should be the same for a proper comparison of drag.

Now it is important to understand how air behaves when an object cuts trough it. Think of air streaming around a body as flowing inside a stack of flexible tubes. The walls of the tubes are impenetrable, infinitesimally thin and follow the local streamlines faithfully. When the body approaches at subsonic speed, the air in the tubes near that body makes way for it by speeding up: This reduces the needed cross section and lowers static pressure, so the total pressure will stay constant. On the back side of the body the air slows down again and the tubes regain their old cross section and static pressure. Bernoulli in action.

When the speed nears the speed of sound, however, the speeding up is joined by a drop in density. Still, the air near the body speeds up but that will not change the cross section as much as before, because now this speed increase is coupled with a loss of density. The cross section still drops, but not by as much as before. More tubes have to bend away from the body and need the air in them to speed up so the body can squeeze through. More general: A change in body thickness (more precisely: The second derivative of its cross section) will work on more tubes, so its effects do not die down as quickly as in subsonic speed.

At the speed of sound the cross section decrease due to speed changes is exactly balanced by the drop in density, so the same mass of air needs more volume and eats up all the gain from increased speed. Now there is a wall of air which cannot yield facing the approaching body. That is the sound barrier. In reality, the speed around that body does not reach the speed of sound at the same station in all tubes, so there are mildly sub- and supersonic sections which will allow it to squeeze through. Still, drag is much increased and depends heavily on details in the body contour.

At supersonic speed density changes more than speed, so in order to reduce its cross section, the air in the tubes will slow down in order to make way for the body. Since it has no advance warning of the approaching body, it does so in a shock. As a consequence, the cross section can now be reduced because density increases in that slower air past the shock. Static pressure increases also so total pressure can stay constant again.

This thought experiment was explained in 1951 to researchers at NACA Langley by Adolf Busemann. One person in the audience, a young fellow named Richard Whitcomb, used the insight he gained to formulate the area rule a few weeks later.

And in order to create lift, that inclination is needed, so our comparison will always show higher drag in supersonic flow than in subsonic flow.

Indeed, there is a local drag maximum around Mach 1 and both flying a little slower and faster than at that speed of maximum resistance will reduce drag for the same lift. But if the comparison is between speeds more than approx. 0.2 Mach away from the local drag maximum, supersonic flight will always create more drag.

Not the answer you're looking for? Browse other questions tagged acoustics electrical-resistance aerodynamics air or ask your own question.