Suppose I have a gas in a piston expanding adiabatically against atmospheric pressure. If I do this reversibly, the final state is uniquely specified by the final volume $V_F$ of the gas.

What happens if I let the same process happen irreversibly? That is, I let the piston expand adiabatically against atmospheric pressure until some maximum volume, or until the pressure in the piston equals 1 atm, whichever comes first. Is there a unique final state in terms of the final volume $V_F$ or final pressure $P_F = 1 \,{\rm atm}$? If not, what else do I need to specify? Maybe the final temperature $T_F$? What information about the expansion is missing? (Neglect gravity and the mass of the piston, friction, etc.)

What is the typical situation, for example, in the case of a (very well insulated) steam engine piston? Is it possible to predict the final state of the gas after the expansion?

Suppose I have a gas in a piston expanding adiabatically against atmospheric pressure. If I do this reversibly, the final state is uniquely specified by the final volume $V_F$ of the gas

You didn’t answer my original comment about this first sentence directly and it wasn’t subsequently edited. The way it is worded it makes it sounds like the gas pressure is initially greater than 1 atm and something is initially holding the piston in place. Then the piston is released allowing it to expand against a constant external pressure of 1 atm. If that’s the case, it is not a reversible adiabatic expansion, but the irreversible process discussed below.

If, on the other hand, you meant in the first sentence that the external pressure and gas pressure are the same and greater than 1 atm due to the application of an external force, and the external force needed to maintain equilibrium is gradually reduced so that the expansion occurs quasi-statically, then we will have

If the expansion is allowed to continue in this manner until the externally applied force is reduced to zero and the gas pressure is in equilibrium with the external pressure of 1 atm, then the final volume $V_f$ will be uniquely specified based on

What happens if I let the same process happen irreversibly? That is, I let the piston expand adiabatically against atmospheric pressure until some maximum volume, or until the pressure in the piston equals 1 atm, whichever comes first.

Now it appears we start with the same initial conditions as the reversible expansion, but instead of gradually reducing the externally applied force that was maintaining equilibrium, we abruptly remove it so that the gas is now expanding non quasi-statically (irreversibly) against 1 atm.

The following is in response to your follow up question:

More generally, what I'm really asking is this: does the final temperature depend on messy details of the expansion?

Yes it does because the details of the expansion determine how much work is done. We will take the general cases of how to determine the final temperature (and volume) for a reversible and irreversible adiabatic expansion, each ending at the same final pressure, $P_f$. Then we will provide a specific example that shows how the final temperatures and volumes will differ.

The process equation is:

Then since $V_f$ and $P_f$ are known, you can calculate $T_f$ using the ideal gas equation, for 1 mole of gas

For any adiabatic process

For any ideal gas,any process

Putting the last two equations together

From the ideal gas law

The following is an example that a friend and I worked on recently. We wanted to compare reversible and irreversible adiabatic expansions of an ideal gas where the expansions both terminated at the same pressure. In this case we chose air, which is essentially a mixture of two diatomic gases (oxygen and nitrogen) where $k$=1.4 and $C_V=0.2053\frac{l.atm}{mol.K}$ .

Initial conditions for both processes:

Final conditions for both processes:

We then applied the general equations above to both processes.

So we see that for the same final gas pressure, the final volume and temperature will be different for the two processes.

This was an example in which the final pressure was 5 atmospheres. You can do the same calculations for your example of a monatomic gas expanding against a constant pressure of 1 atmosphere using the same equations. 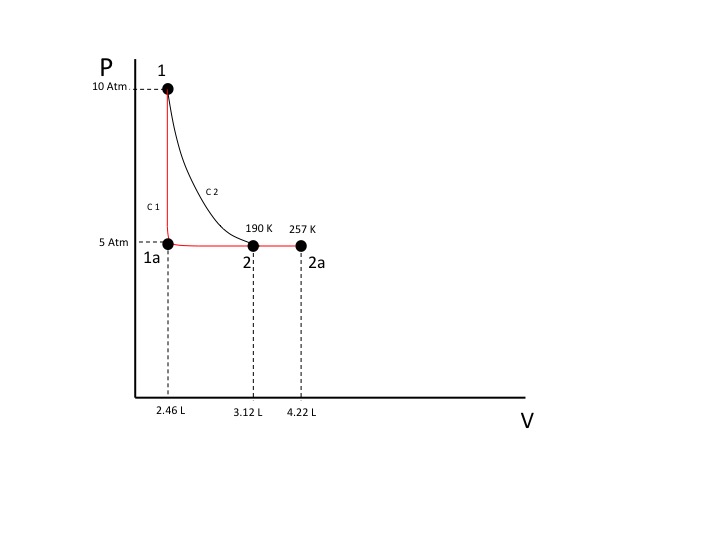 Since the expansion is adiabatic ($Q=0$), the final temperature depends on a single quantity associated with the expansion: the amount of work done by the gas.

The gas does not need to change its temperature at all as it expands. If the piston is massless and is released against zero external pressure, the gas simply expands irreversibly and the final temperature is equal to the initial temperature. That is,

If, however, work is done by the gas as it expands, we will have

where $W$ is the work done by the gas as it expands. Thus,

The above equation was for a monoatomic ideal gas, but in general we will have

The maximum work that can be extracted from the gas is when the external pressure is infinitesimally smaller than that of the gas. This what is known as a reversible process. In that case, we know that, for an ideal gas, the work done in an adiabatic expansion is just

we find the lowest temperature reached by any expansion:

The final temperature will therefore be in the range:

How do we determine $V_f$? Let's do this again for a monoatomic ideal gas. We know that the final volume will satisfy:

For an ideal gas the change in internal energy, for any process, depends only on temperature change according to

Therefore there is no change in temperature.

Not the answer you're looking for? Browse other questions tagged thermodynamics reversibility adiabatic or ask your own question.