How do Zener diodes maintain the potential across their terminals?

My physics book has a topic about Zener diodes being used as voltage regulators in the reverse bias.

Well, I'm curious to know how does a Zener diode maintain the potential across its terminals after it has undergone avalanche breakdown? Does it start conducting in full offering almost zero resistance? If so, how can there be a potential gradient across it?

Is the principle that for high current change, there is a minimal and negligible change in potential across the Zener? But doesn't it behave as a pure conductor in avalanche breakdown? If so, how is it possible for there to be a drop in potential? After all it allows large amounts of current through it. Finally, can you keep answers somewhat simple?

In avalanche breakdown the zener diode does not behave like a pure conductor. It behaves like a "something that consumes N volts" followed by a perfect conductor. An intuitive way to think of it is: it costs you N volts worth of energy to keep the diode in breakdown. If you apply less than N volts breakdown stops and it barely conducts at all (it becomes a very good resistor.)

The way avalanche breakdown works is: there are some charge carriers (e.g. electrons) that are being accelerated by the voltage. When the electron hits a bond between two other atoms if the energy is low enough it just bounces off. But if the voltage is large enough then a loose electron will get accelerated (by the voltage) so that it will hit with sufficient energy to break a molecular bond and release another electron. Now there are two electrons being accelerated to fast enough speeds to break bonds. The instant you reduce the voltage below the breakdown limit, the electrons are no longer accelerated enough to break any more bonds, so the free electrons "settle back" into the bonds that are missing electrons and the current stops almost immediately. All that energy from the acceleration is released as heat. 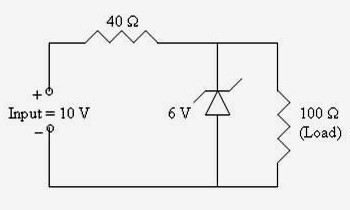 Given a sufficiently narrow depletion region, electrons from the valence band on the P side can spontaneously move to the conduction band on the N side via quantum tunnelling. This constitutes a current. If it helps in visualisation, you can see this as holes being injected into the P side valence band and electrons being injected into the N side conduction band.

To put it as succinctly as possible, the process involves creating a junction voltage so high that electrons on the P side break free from their covalent bonds and move to the N side, creating a current. The voltage remains because it is required to maintain a constant flow of current by making it energetically favourable for electrons to move from the P side to the N side.

The use of so-called Zener diodes for voltage "stabilization" is purely due to the experimental fact that their I-V characteristics have a very sharp (almost vertical) increase in reverse current upon reaching a critical reverse voltage ("breakdown voltage", Zener voltage Vz). Therefore, in a series connection with a resistor, the voltage drop over the Zener diode remains almost constant, close to Vz, even when the current through the series connection varies strongly. The physical mechanism for this steep rise in reverse current can be the band-to-band tunneling through a narrow depletion zone in highly doped pn-junctions (Zener effect) or the avalanche multiplication of charge carriers by impact ionization due to high fields in the depletion zone. The latter leads to the usual reverse breakdown of a pn-diode when the current is not limited by a resistor. This effect can be used for voltage stabilization or generation of a reference voltage in circuits.

Not the answer you're looking for? Browse other questions tagged popular-science electronics semiconductor-physics or ask your own question.

0
How do Zener diodes work?

0
How do Zener diodes work?
9
Pn junction voltage drop?
1
What actually happens at the microscopic level in a Zener diode in reverse bias?
9
Why isn't there a potential difference across a disconnected diode?
0
Query regarding the working of a Zener diode
2
After a diode start conducting, can you increase voltage across the diode without current change in the diode?
1
Is there a potential difference across the bulb after current passed through a diode?