Can our universe be a true vacuum bubble?

This paper claims that the universe was created out of nothing. But this nothing is really something - "false vacuum". It is not nothing, this paper did not explain from where this vacuum came from in the first place. Or do they consider this vacuum as an eternal entity?

I think you are mixing up two related concepts, the true and false vacua: 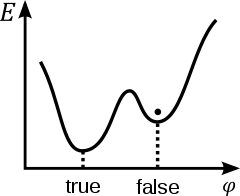 A scalar field φ in a false vacuum. Note that the energy E is higher than that in the true vacuum or ground state, but there is a barrier preventing the field from classically rolling down to the true vacuum. Therefore, the transition to the true vacuum must be stimulated by the creation of high-energy particles or through quantum-mechanical tunneling.

And the metastable vacuum that the symmetry breaking mechanisms need:

In the cosmological models , before the various symmetry breakings, i.e. when the energies are very high, the Higgs type metastable vacua can be considered stable/true, as there is no possible lower energy for the particles in the primordial soup to go. That is how the Higgs (and other unified models) symmetry breaking is treated within the Big Bang model. When due to the big bang expansion as the energy of the temperature of the universe fell, then the transition to the ground state of the Higgs mechanism happened.

Creation of the Universe out of nothing is a hypothesis for the Big Bang cosmology. This paper purports to explain this mathematically, but it is way over my head. Lets hope that a theorist will give you an opinion on the value of the paper.

Not the answer you're looking for? Browse other questions tagged quantum-field-theory general-relativity cosmology universe vacuum or ask your own question.

1
What is meant by "spontaneous creation" in this paper?
3
Could we see evidence of a past vacuum metastability event?
0
How is mass-energy conserved during false vacuum decay?
2
Why hasn't the false vacuum collapsed yet?
0
What is time till false vacuum decay? (Which source is in error?)