How does Ehrenfest's theorem apply to the quantum harmonic oscillator?

Ehrenfest's theorem, to my level of understanding, says that expectation values for quantum mechanical observables obey their Newtonian mechanics counterparts, which means that we can use newton's laws on expectation values. However, in the case of the quantum harmonic oscillator, this clearly does not look newtonian because the expectation value of the position does not oscillate like the newtonian $\sin\omega t$. 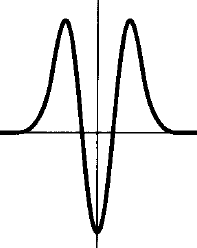 You can see that the general version of the Ehrenfest theorem works trivially for all eigenstates. It states that for the arbitrary observable $A$ its expectation value satisfies the equation, \begin{equation} \frac{d}{dt} \langle A\rangle=\frac{1}{i\hbar}\langle [A,H]\rangle+\langle \frac{\partial A}{\partial t}\rangle \end{equation} However on the eigenstates, \begin{equation} \langle\psi_n| [A,H]|\psi_n\rangle=\langle\psi_n|AH-HA|\psi_n\rangle=E_n\langle\psi_n|A-A|\psi_n\rangle=0 \end{equation} So the expectation value of the observable that doesn't explicitly depend on time, doesn't evolve on the eigenstates which is what you would expect.

So where does the Ehrenfest theorem lead to the classical dynamics? You need to consider the localized wavepackets. The simplest example would be the coherent state of the Harmonic oscillator that is the Gaussian wavepacket that follows the classical trajectory

For the Harmonic oscillator the Ehrenfest theorem is always "classical" if only in a trivial way (as in case of the eigenstates). However in general the Ehrenfest theorem reduces to the classical equation of motion only on such localized wavepackets that concentrate near the classical trajectory as $\hbar$ goes to zero. The key point happens to be the interchange $\langle V'(x)\rangle \mapsto V'(\langle x\rangle)$ that on general states can't be done. So if you want to recover some classical dynamics from the quantum theory look on the localized wavepackets.

What you wrote down is just a complete set of solutions of the time independent Schrödinger equation. \begin{align} [- \frac{\hbar²}{2m} \Delta + V(x) ] \Psi(x) = E \Psi(x) \end{align} Of course this solutions don't carry any time dependence, because the time-independent Schrödinger equation (in this representation) only makes statements about functions that depend on the spatial coordinates only (in this case, this is only x).

If you would apply this to your suggested set of solutions of the harmonic oscillator, you would arrive at time dependent solutions. THOSE are the ones that the Ehrenfest-Theorem makes a statement about. You would then calculate that the expectation values $<X>$ and $<P>$ do not change. But you would as well calculate that both of this values are 0. This is in perfect agreement with the Theorems of Ehrenfest, and the classical analogon would be a particle resting at the deepest spot of the harmonic potential.

Not the answer you're looking for? Browse other questions tagged quantum-mechanics classical-mechanics wavefunction harmonic-oscillator or ask your own question.