What is Snell's window and how does it depend on the observer's depth?

Why is it that an underwater observer can see only a circular "window" and also can't see anything above the separating surface? How does the "window" depend on the depth?

If you are under water you will see a disk shaped area above you in which there is the image of the hemisphere above the surface.

At large depth this light fades because of absorption and scattering.

When a light ray passes from an optically denser to a rarer medium, it bends away from the normal at the point of incidence, in accordance with the Snell's law of refraction:

The following diagram clearly illustrates what happens when the angle of incidence is lesser than, equal to and greater than the critical angle.

The same diagram is also true if we reverse the direction of light rays.

Imagine yourselves as the fish in the image below: 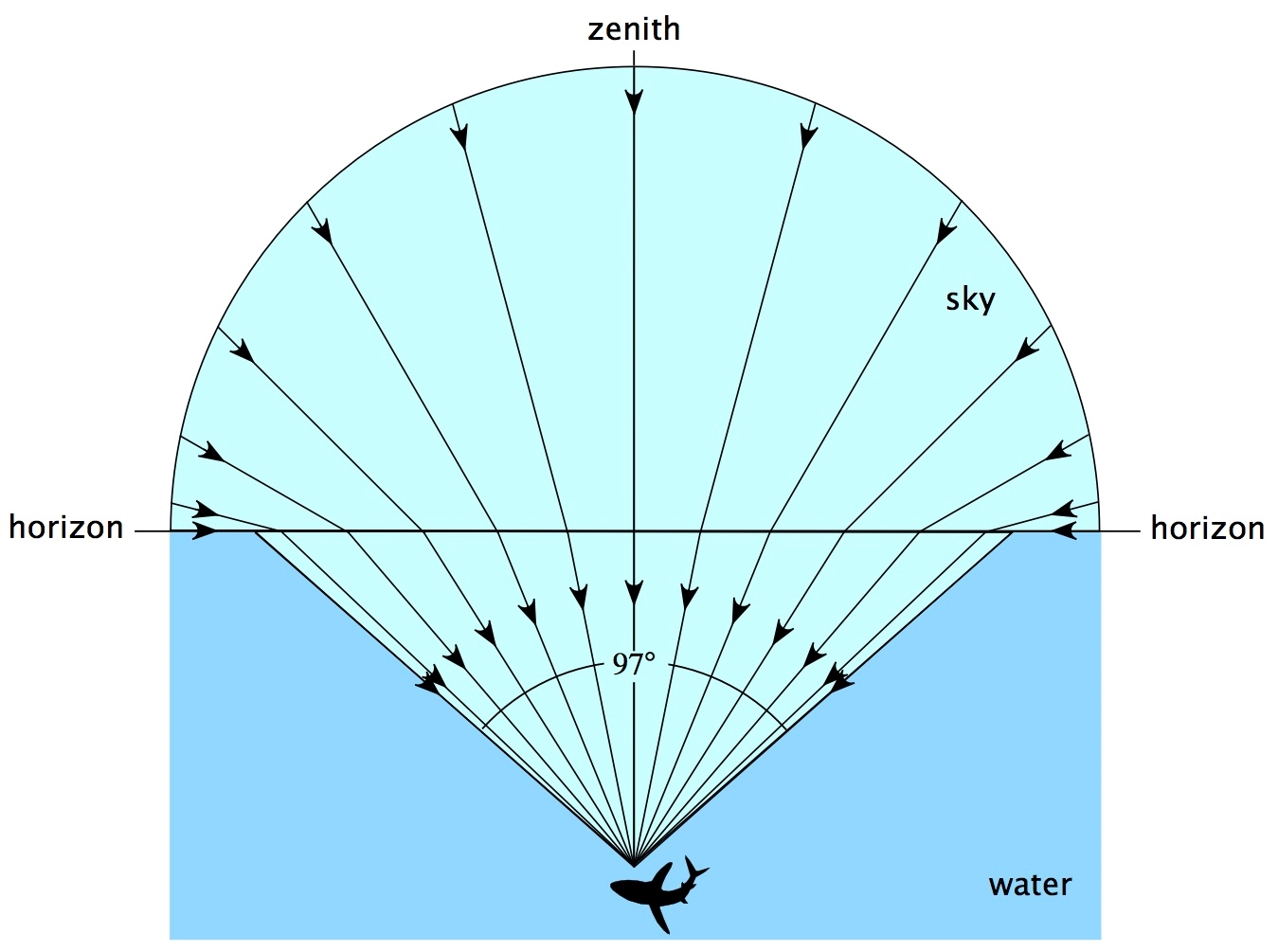 When you look up, you could see only an approximately circular region of the sky. Beyond this circular region you'd either see the reflection of the bottom of the swimming pool or any other water body, or if it's deep enough, it would be dark (as shown in this image). This circular region is known as the Snell's window. Called as "Snell's ..." in honour of the scientist Mr. Snell. Called as "... window" because you could see stuff outside the water only through this, in a similar way to the windows in our buildings.

Looking up from underwater, one sees the whole sky. But it doesn’t stretch $180^\circ$ from horizon to horizon like it does on the surface of water. Instead it's compressed into a circle about $97^\circ$ across, regardless of the observer’s depth. Why $97^\circ$? This is because, the critical angle of water-air interface is about $48.6^\circ$ and twice of which is $97.2^\circ$.

Irrespective of the depth, the angle $97^\circ$ remains the same. Just the area on the surface increases. However, as you move down intensity of light decreases due to scattering and absorption by the water molecules. Or in other words, the sky above becomes dimmer and dimmer as you go deeper.

When a light ray passes from an optically denser to a rarer medium, it bends away from the normal at the point of incidence, in accordance with the Snell's law of refraction:

Now as you gradually increase $θ_1$ then $θ_2$ also increases. Since $θ_2>θ_1$, $θ_2$ attains $90^\circ$ before $θ_1$. The angle of incidence $θ_1$ when the refracted ray grazes over the interface is known as the critical angle $θ_c$. For even higher values of angle of incidence, refraction is no longer possible and total internal reflection takes pl

Not the answer you're looking for? Browse other questions tagged optics refraction geometric-optics or ask your own question.

15
Clarification needed in the concept of apparent depth & real depth
20
How does the grid on the microwave oven window prevent microwave radiation from coming out?
0
How do they derive the apparent-real depth formula?
24
How can my window not scramble the image of my yard?
1
Fish eye view problem
1
What causes the circular polarization of light from outside Snell's window?
2
Does Snell's window (the optical man-hole) work both ways?
3
(How) can one use the concept of apparent depth to solve this ray-refraction problem?