Is every open circuit a capacitor?

I think that even open-ended wires can let AC current flow through them, just with a low capacitance. I also think an antenna could be a capacitor and open ended. Am I thinking correctly?

For example, the circuit inside a plug that connects together computer routers and switches in a big router farm has to operate at ultrahigh frequencies, at which two adjacent traces on a circuit board can present enough stray capacitance to stop the device from functioning.

And the capacitance between a long piece of wire strung between two trees as a shortwave transmitting antenna and the ground beneath it is enough to alter the resonant frequency of the antenna, which must be taken into account when designing and building the antenna.

However, you should also keep in mind $-$ particularly when you're describing any type of antenna $-$ that any such residual capacitance may very well be competing with the inductance of the circuit, coming from nonzero interactions between the different currents in different parts of the circuit.

For an actual antenna, where you're radiating significant amounts of power, all of this needs to be supplemented with radiation resistance, which represents that loss of power from your current source into the far-field electromagnetic field.

A slight deviation from the actual question -- focus on antennas. Antennas can be capacitive or reactive in how they respond to RF energy either by feeding the antenna used for transmitting or from electromagnetic waves in receiving.

A purely resonant "ideal" antenna to a single frequency is neither capacitive nor inductive as one definition of resonance is when the antenna reactance (Imaginary) is zero. Thus pure resistance (Real) made up (hopefully) of mostly radiation resistance with smaller losses in thermal resistance.

The mobile "screwdriver" antenna that I had on the back of my pickup truck for my mobile HF transceiver had a center-loaded coil (Inductance) to offset the usually capacitive antenna. Short antennas (shorter than resonant length for the frequency) are capacitive. Long antennas are inductive.

I thought adding a few photos would help in this description. This first photo shows the antenna and the inductor is there in the center. You can't easily see the top section (above the coil) as it is a whip antenna about 3 1/2 feet long. The coil is tunable with motorized screw drive controllable from the inside of the truck (yes, while I am driving). 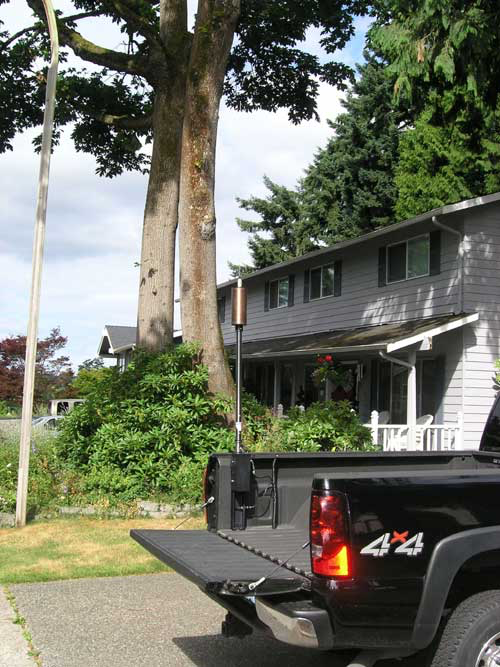 To achieve a good match at the feed point at the base of the antenna for the lower frequencies (80 and 40 meter bands) I use a shunt coil. I create the coil merely by experimentation and not design to achieve a good match (low SWR on impedance match). It us usually about 2 microHenries or less at operating frequencies. For the lower bands (20, 17, 15, 12, and 10) it looks like an open circuit rather than a shunt. 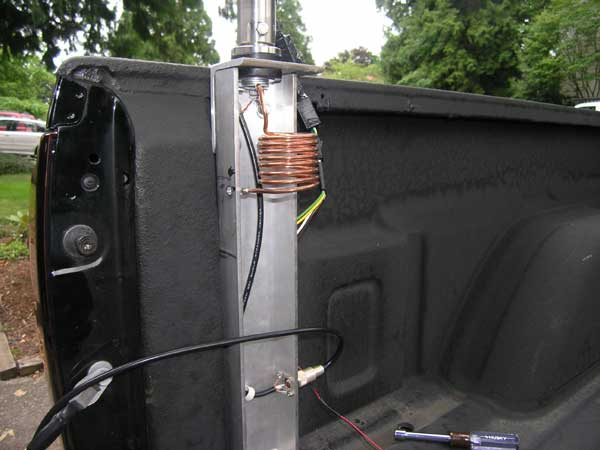 It is more useful to talk about capacitance rather than capacitors, because capacitance is a tendency of the distribution of charge to affect current flow, while a capacitor is any device designed to have capacitance. All conductors have free charges, and thus any conductors that are in proximity to one-another will affect each other electrically. Their charges will 'feel' an electric force, and will therefore rearrange, and the way this happens is described by the phenomenon of capacitance. Particularly, this describes mutual capacitance, as opposed to self-capacitance, which is the tendency of a body to store charge.

Capacitance as a concept relates a potential (or potential difference) of a body to the amount of charge stored on that body. In a vacuum, a body's capacitance depends only on its geometry and material properties. When another body is introduced nearby, they interact as described above, and therefore the capacitance of either body will change. In this case it makes the most sense to talk about conductors which are allowed to exchange charge (e.g. conductors connected to +V and ground) without being shorted together (separated electrically by a dielectric), and then we define their mutual capacitance as the ratio of charge to potential difference.

So when these requirements are met (two electrically separate conductors which are part of the same circuit), there exists mutual capacitance, which is what people mean when they say "capacitance".

Keep in mind, however, that modelling of circuit behavior with lumped elements is not appropriate when signals (voltage, current) change rapidly. If the wavelength of a sinusoidal signal is nearly of the scale of a component, or smaller, use a distributed model of components. As well, most circuit analysis neglects radiation loss, but when considering antennas you cannot. Treating radiation loss mathematically can make a couple of straight open circuit wires with incredibly small capacitance between them look like big capacitors with shunt inductances, but it's only the way radiation is modeled for circuit analysis. Radiation, in general, is a complicated phenomenon, and requires very detailed analysis. That doesn't mean you can't analyze an antenna though. Just know that if radiation is involved, circuit assumptions may need to be revised to understand the models.

You are correct that between any two conductors separated by a dielectric (solid, liquid or gas) or even by a vacuum, there is capacitance. This capacitance exists, whether or not by design. The capacitance between conductors that is not by design is sometimes referred to as "stray capacitance" (unintended and unwanted capacitance). It is usually extremely small and does not have an effect on a circuit except for the possibility of adversely affecting circuits involving very high frequencies. This is because any unwanted capacitive currents are proportional to both the magnitude of the capacitance and the rate of change in voltage between the conductors, or

When stray capacitance has an unwanted effect on a circuit, it is sometimes referred to as “parasitic” capacitance.

I believe others have adequately covered the topic of antennas and capacitance.

Hope this, together with the other good answers, helps.

A capacitor is nothing more than an anode (wire on one side), a cathode (wire on the other side), and a dielectric in the middle (something reasonably non-conducting). So, yes, if you expose a length of wire in your house and cut it with wire cutters (please trip the breaker first...), what you'll have is a capacitor.

Capacitance has a great deal to do with (a) the amount of conductive surface between the anode and cathode, (b) the nature of the dielectric between those conductors, and (c) the distance between the conductors.

(a) wants to be large. Many commercial capacitors use very long lengths of foil rolled up into a tube to get substantial surface area.

(b) wants to permit charge — but NOT permit an arc. Air will work as a dielectric (and is sometimes used), but it's not very good. I remodeled an old hospital once that had a barrel-sized capacitor (about 20 gallons in size) used with the ancient (circa 1980) X-ray machine. Two enormous lengths of foil wrapped a bazzillion times and submersed with a dielectric oil. For reasons I'll never understand, it was installed in the attic. I couldn't tip it to drain the oil. It's still there.

(c) wants to be small (there's a lot of math here). It's not uncommon for the distance between the plates (the foil strips) to be fractions of a millimeter.

So, yes, there's a minute and usually insignificant amount of capacitance in any open circuit. But it's not worth much.

Every object in a circuit has resistance, capacitance, and inductance, but these quantities are often small enough that they can be treated as being zero. When these quantities are large enough that they need to be considered, they are often separated out in circuit diagrams as "separate" objects to make the analysis easier. For instance, a battery might be represented in a circuit diagram with a symbol for DC voltage source and a symbol for a resistor, as if the voltage and resistance of the battery were being produced by separate objects. In reality, of course, a battery exhibits resistance distributed throughout its length, but for most purposes this resistance can be treated as being concentrated in one location.

As explained by that video, if a half-wave rectified signal is fed into a 50uF cap to ground, and from there passes through a 10K resistor and into another 50uF cap to ground, the second cap could easily have orders of magnitude less ripple than the first. Although it would appear that there is a 25uF connection (two 50uF caps in series) between the two sides of the 10K resistor, the ground connection between the two caps may prevent unwanted coupling of any ground-referenced signal through that capacitance. If the two caps were disconnected from ground but remained connected to each other, however, then that 25uF capacitance would come into play. If that happened but one tried to fix the circuit by adding 50uF caps in parallel with the locations where the originals should have been, that 25uF capacitance would cause the second cap to have about 1/3 as much ripple as the first.

An antenna is designed to radiate with an AC emf. It depends how it is connected, as to whether it acts as a capacitance or inductance at some frequency, if it is not resonating at its fundamental or a harmonic frequency.

Not every open circuit is a capacitor. Every object in a circuit has resistance, capacitance, and inductance, but these quantities are often small enough that they can be treated as being zero.

Not the answer you're looking for? Browse other questions tagged electric-circuits electric-current capacitance antennas or ask your own question.

12
Why is the return current through a printed circuit board's ground plane concentrated below the circuit trace?

0
RC circuit theory and voltage in the capacitor vs Ohm's Law
0
How does a bulb light up when it's connected in a circuit with an uncharged capacitor and a cell?
0
Open Circuits vs. Charging a Capacator
6
How can current flow through an open wire (like a dipole antenna)?
1
Modelling a capacitor with dielectric resistance as a circuit element
0
Charging current in open AC circuit
2
Is a radio receiver antenna a capacitor?
4
How do capacitor plates maintain equal but opposite charges in a circuit?