Consider the following stationary configuration of three disks (in 2d):

I would like to consider the two supporting (lower) disks as entirely static, but the upper disk can move, and it only rests in the absence of external forcing in a static equilibrium between its weight and the normal forces imparted by the supporting disks. 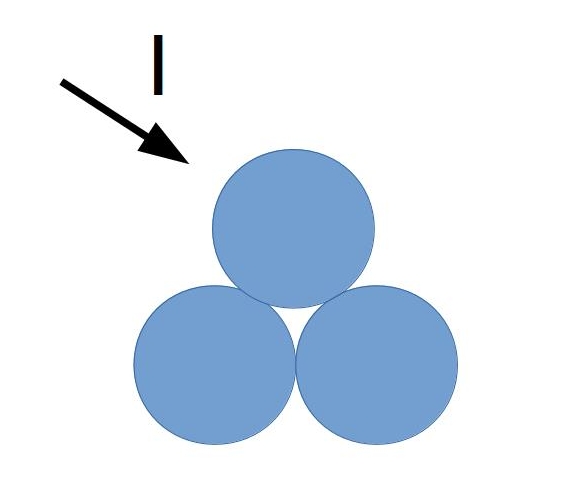 Consider that a sudden impulse $\textbf{I} = \textbf{F}\delta t$ is suddenly imparted to the movable (upper) disk. I would like to model its motion.

How could I approach this problem? What options might I consider to model the subsequent motion of the upper disk? All I can think of is a Cudnall and Strack style spring and dashpot model for the interaction between the movable disk and its supports. However, this is unfavorable because it is only amenable to numerical solution, and it is sensitive to the contact duration $\delta t$ of the collision.

Is there an impulse-based approach I might consider to model the response of the contact forces on the disk to the disturbance $\textbf{I}$?

First let assume the system is frictionless, that makes things a lot more easier. If the 2D balls (with mass $m$) are of exactly the same size and arranged in the above configuration, the normal force direction off the static balls can be deduced by drawing an equilateral triangle between the center of the circle balls. Given we know the direction of normal, the any vectorial component of the external impulse $I$ parallel to the direction of the normal is cancelled out. Resolving the impulse into its vertical and horizontal component $F_1\delta t$ and $F_2\delta t$ respectively, we can take the horizontal component as the active net force acting on the object over time. If we assume that force goes through the center of the uniform 2D ball, the ball slides over the bottom-right static ball and go on with velocity $v$ after time $t_f$, if the force is perpendicular to the radial line from the center of the ball, the ball rolls over the static instead.

Not the answer you're looking for? Browse other questions tagged classical-mechanics collision or ask your own question.

19
Which Mechanics book is the best for beginner in math major?
3
Rotating/Translating Disk
2
What is the appropriate device for measuring energy loss from collision with surface?
3
Does the stationary object deform more than the moving one after a collision?
0
In Which Direction are the Two Bodies Moving During a Collision?
4
How much mass is the threshold after which quantum mechanics no longer applies in the double slit experiment?