Why does the p-region have a higher energy level than the n-region in a diode?

Looking at the image below, I'm curious as to why the p-type region is at a higher energy level than the n-type region when no external voltage is applied. How is that?

The E-field, if I'm not mistaken is directed from the n-region towards the p-region throughout the depletion zone. The Energy is defined as such $E = q V$, is it simply because both the $V$ and $q$ are negative in the p-region, or am I missing something here? 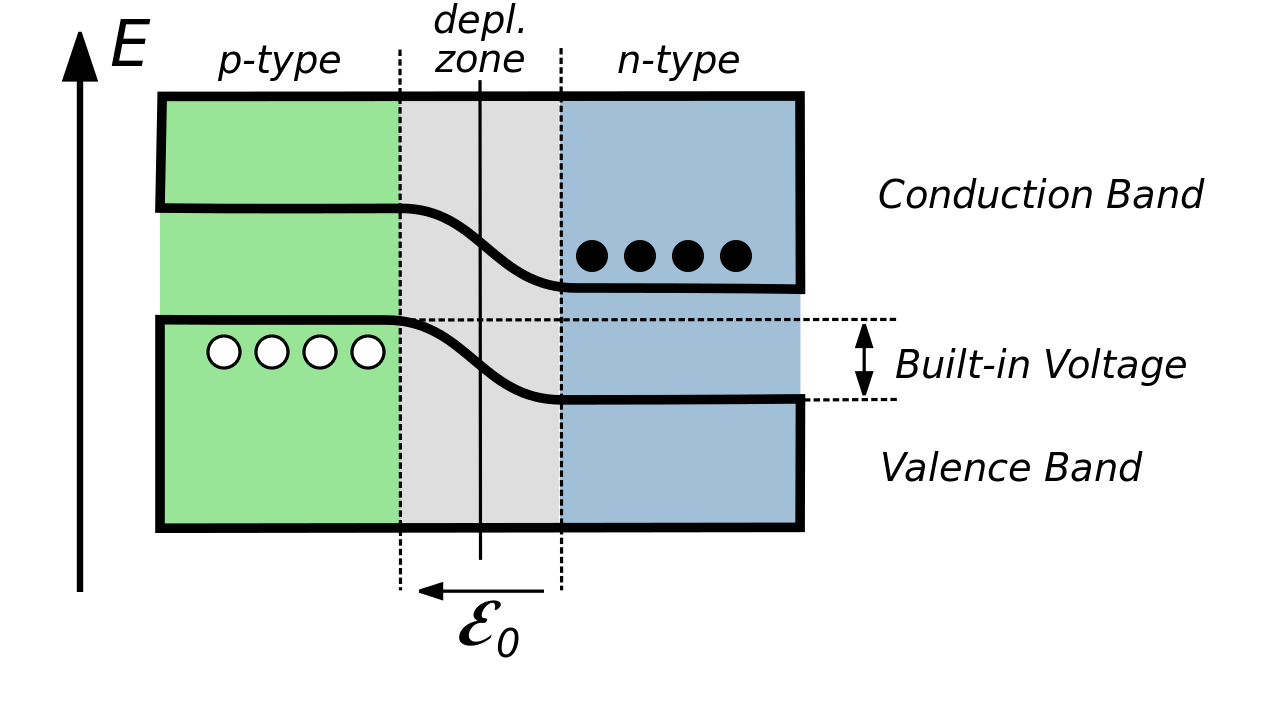 This is because the semiconductor in the picture is in thermal equilibrium (the fermi-level is constant with regards to x-y-axis).

In a p-type material the fermi-level is closer to the valence band than to the conduction band and the opposite is true for n-type materials. When these are drawn in thermal equilibrium the result is an image like the one you have posted above.

The image above doesn't really give energy levels in the sense that you're asking but rather show potential difference. Given the two different materials they accumulate positive and negative charges respectively. As we know, when we interface these two materials carriers drift into the other material in an attempt to achieve charge neutrality, this manifests itself as a diffusion current and a potential difference.

The actual energy levels of the materials is given by the vacuum-function ( i know this has a proper name but i can't remember it at the time ) which is essentialy the energy-difference relative to an electron at rest unaffected byt he material ( e.g an electron in vacuum ).

TLDR; The semiconductor above is drawn in thermal equilibrium, as a result of this (the fermi level being constant throughout the material) the p-side appears to have bands at higher energy levels.

Imagine that the example semiconductor here is silicon. The p-type region has impurities with only three valence electrons which creates a "hole" in the sp3-hybridized diamond lattice bonding states. The n-type region has impurities with five valence electrons creating an extra electron in the conduction band. The holes and electrons are free to migrate through the junction; however the nuclei of the impurities are "stuck" in the lattice. As electrons drift away from n-type impurities the n-impurity nuclei create regions of positive charge. As holes drift away from the p-type impurities the p-impurity nuclei create regions of negative charge. In equilibrium the charge differential creates an electric field which prevents further "wandering" of electrons and holes across the junction.

Not the answer you're looking for? Browse other questions tagged semiconductor-physics light-emitting-diodes or ask your own question.

11
Why isn't there a potential difference across a disconnected diode?
0
Depletion region (PN Junction) question
0
How to use Anderson's rule to construct band discontinuities in heterojunctions
2
PN junction diode
1
Conventional explanation of basic Semiconductor & Diode behavior unconvincing
1
Why does diode built-in voltage persist when current begins flowing?
1
Why isn't the positive side of n type semiconductor in diode neutralised by electrons on its own side?
5
How does a transistor work?
2
Does a valence electron have to go conduction band first to move to other atom in semiconductor?