Adding a capacitor in parallel improves power factor of an inductive circuit?

I know that to reduce power loss during transmission, we require a power factor as close to one as possible. This can be done by making $Z$ tend to $R$ which can be done by increasing $X_c$ such that it becomes equal to $X_l$ (inductive reactance).

My textbook says this can be done by "connecting a capacitor of appropriate capacitance in parallel" to counteract the lagging wattless component of current.

My doubt is this: Adding a capacitor in parallel will increase equivalent capacitance of circuit, thus $X_c =\frac {1}{wC}$ should decrease, which is contrary of what we wanted to do. Why so?

Or have I misinterpreted some point?

To increase the power factor, you want to make the imaginary part of the load impedance or admittance as small as possible, so the impedance becomes real-valued.

Adding a capacitor in parallel will increase equivalent capacitance of circuit, thus Xc (= 1/wC) should decrease, which is contrary of what we wanted to do.

and for a capacitor,

Unfortunately for learners, experienced power engineers often neglect the negative sign and just remember in the back of their heads that capacitive reactance is negative while inductive reactance is positive. But by neglecting the sign as a learner you miss the whole reason that putting a capacitor in parallel with an inductor leads to reducing the overall reactance.

where $Y$ is the load's reactance, $G$ is its conductance, and $B$ is the susceptance.

while the capacitor has

Now when we connect them in parallel,

Since the inductor's susceptance is negative, adding a capacitive susceptance decreases the overall susceptance so long as $\left|B_C\right| \le \left|B_L\right|$. By decreasing the susceptance, we bring the reactance closer to being real-valued, and we improve the power factor.

You can also look at this from the perspective of the parallel combination of an ideal capacitor and inductor which is in turn in parallel to an ideal resistor. The general equivalent impedance of two components in parallel is

For the capacitor in parallel with the inductor

If $X_{L}=X_{C}$ the impedance of the combination is infinite and all current flows to the resistance part of the circuit. The current and voltage delivered to the load by the voltage source are in phase making the power factor unity. 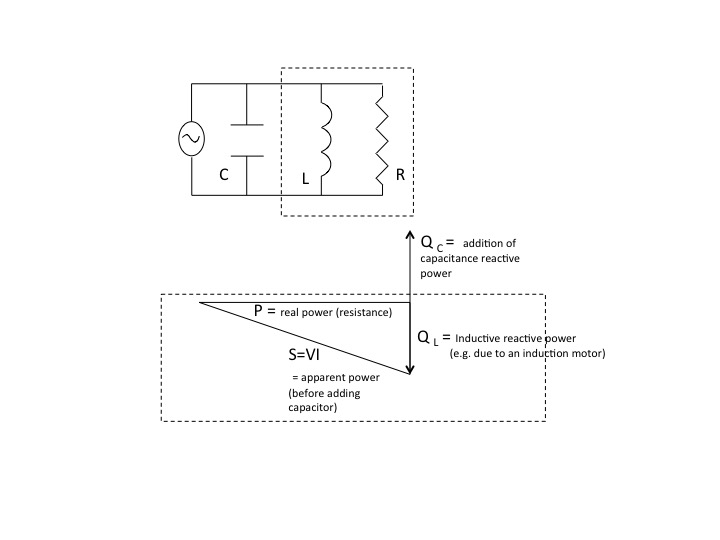 Not the answer you're looking for? Browse other questions tagged electric-circuits electrical-resistance capacitance power inductance or ask your own question.