How is energy conserved during simultaneous refraction and reflection of light?

My question is regarding the partial reflection and refraction of light when incident on a refracting surface.

Here, the energy of Incident Ray is E=hv of Reflected Ray is E=hv and that of Refracted Ray is also E=hv. I think so because neither refraction or reflection are accompanied by change in frequency(v) or so I have been told.

Doesn't this violate the pirinciple of conservation of energy?

As the initial energy is hv and final is 2hv. 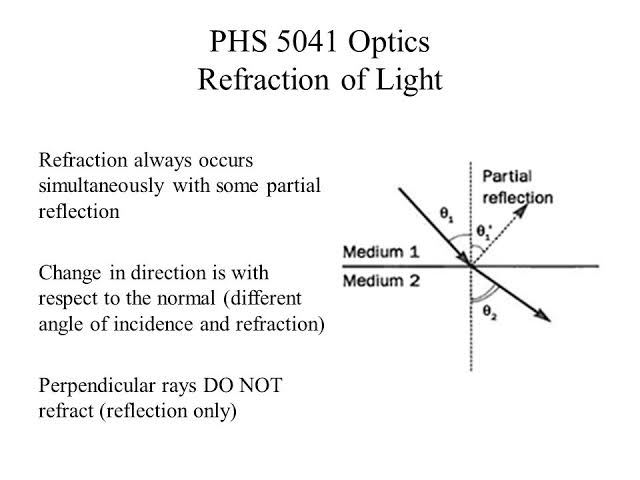 I will give you an answer on the QM level.

In the case of reflection, it is 1. that is elastic scattering.

You are saying that energy is E=h*f for light. Let's take twp possibilities:

In reflection and refraction there is a point in time when the light has a potential energy reaction conserving energy because change in direction.

First I am going to take exception to the last sentence, "Perpendicular rays DO NOT refract (reflection only). Perpendicular rays reflect and transmit, though the transmitted rays don't change their angle (or direction). See Snell's law.

But looking on this from the point of view of $E=h\nu$, and getting the outcome of $2h\nu$ is an interesting question. That view is a photon view, and a single photon will just take one of the two paths, reflected or refracted, much like in two slit interference, or an image being formed. For the photon view to work you need to look at photon statistics. I once did a thin film coating transmission and reflection calculation doing photon statistics at each interface along with interference for each beam.

So taking many photons and the probabilities of being reflected or refracted (or?) I am going to deviate a little from some texts and say the incident power = refracted power + reflected power + absorbed power + scattered power does hold.

Another thing to consider is the intensity (power/area) of the refracted beam. Due to refraction it does not have the same cross section of the incident beam. All of this is calculated within the Fresnel equations for the electric and magnetic fields for reflection and refraction in any E&M textbook.

Not the answer you're looking for? Browse other questions tagged visible-light energy-conservation reflection refraction intensity or ask your own question.