Why Neutrino is a ghost particle?

This is a misleading way of talking in popularized versions about neutrinos, not recommended for physics vocabulary, since in the theories for particle physics "ghost" has a different mathematical meaning.

The everyday version of "ghost" is a moving impression that can pass walls and appear randomly, and popularizers attribute this adjective to neutrinos because they are hard to detect as they mainly interact with the weak interaction. Thus they can cross large distances in space passing through matter like "ghosts".

Nevertheless in our experiments we do detect neutrinos and antineutrinos, form beams of them and experiment with them and thus given them the niche in the elementary particle table of the standard model. Nothing ghostly, just weak interacting.

I have worked in experiments with neutrino beams, and we detected them by their interactions, which helped build up the standard model. 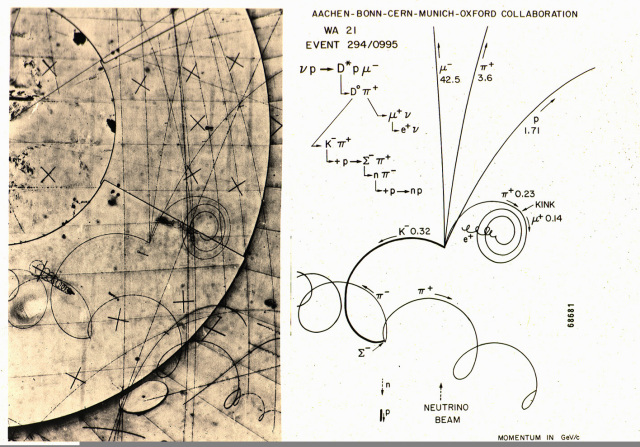 In the above experiment the neutrino beam enters from the bottom, there is a magnetic field perpendicular to the picture so the charged tracks turn. The neutrino as neutral leaves no track but interacts with the hydrogen in the bubble chamber.

why it does not interact with gravitational field

As it has a four vector of energy momentum, it will interact with the gravitationla field, very weakly, look at the forces again and their strength.

Ignore the adjective in popularized articles. They are just hard to detect.

It is called a "ghost particle" because it can pass effortlessly through solid objects "as if it were a ghost". This is another way of saying that it interacts very little with ordinary matter.

The reason it does not interact much with ordinary matter is that it has no electric charge (and so will not be acted upon by electric or magnetic fields) and it contains no quarks (and so it will not be acted upon by the strong nuclear force). This allows it to travel almost completely unimpeded through (for example) light-years of solid lead without scattering off any of it.

For a neutrino to interact with another particle, it must strike it more or less head-on, which is very unlikely even if the beam of neutrinos is very intense and the target material is extremely dense.

Presently, it is believed that neutrinos have very small masses, which means that they actually will experience gravitational forces.

A neutrino is not affected by an electromagnetic field because it has no charge. It is a electrically neutral.

It barely interacts with matter for the same reason. It just tends to go right through atoms because it doesn’t interact electromagnetically with electrons or protons. It does experience something called the “weak nuclear force” but this is much weaker than electromagnetism.

It does experience gravity. Neutrinos have a very small mass, but even if they were massless they would still experience (and also create!) gravity, just like photons do.

Not the answer you're looking for? Browse other questions tagged particle-physics neutrinos weak-interaction matter or ask your own question.

6
Neutrino Oscillation and their gravitational implications
36
Are neutrino stars theoretically possible?
0
Does the neutrino have charge? Obviously not!
1
Can neutrinos interact by the EM interaction and gravity?
5
Could a 4th generation neutrino be a viable candidate for dark matter?
24
Can neutrinos “hit” electrons?
4
Is neutrino really a point (fundamental) particle?
18
Neutrinos passing through black hole
3
Matter effects contributing in solar, atmospheric and reactor neutrino oscillations