In deriving the inequality $$e \leqslant 1 - \frac{T_c}{T_h},$$ Schroeder, in An Introduction to Thermal Physics, uses the fact that for one complete cycle of a heat engine, $$\frac{Q_c}{T_c} - \frac{Q_h}{T_h} = \Delta S \geqslant 0.$$ However, I don't buy that this is the total change in entropy because he doesn't account for any entropy created due to work being done by the engine. I'm assuming that something is wrong with my reasoning, but what?

Edit: As an example, consider a heat engine that lifts a ball and drops it thereby increasing the internal energy and thus the entropy of the floor the ball lands on.* This increase in entropy has nothing to do with the change in entropy due to heat flowing out of the hot reservoir and into the cold reservoir.

*I don't see why I shouldn't end a sentence with a preposition.

I don't buy that this is the total change in entropy because he doesn't account for any entropy created due to work being done by the engine. I'm assuming that something is wrong with my reasoning, but what?

The equation is the total change in entropy (system + surroundings) and does account for the possibility that the engine creates entropy.

The entropy change of the system is always zero for any complete cycle (reversible or not) because entropy is a state function of the system and does not depend on the path. Consequently, any entropy created by the system is transferred to the surroundings. If a heat engine creates entropy, the cycle is irreversible, and

On the other hand, if a heat engine operates between two thermal reservoirs in a reversible cycle (Carnot cycle) the heat engine will not create entropy and

For any heat engine operating between two thermal reservoirs the cycle efficiency is the net work done divided by the gross heat added, or

If the cycle is reversible (Carnot Cycle)

Which is the Carnot efficiency.

If the cycle is irreversible,

Yes, they should be included in the calculation, but they don't account for the change in entropy due to work being done.

Any entropy generated in the system (due to irreversible work, or otherwise) in a cycle needs to be transferred to the surrounding in order that the change in entropy of the system is zero. There are two ways to transfer entropy between the system and the surroundings; heat and mass flow. Mass flow because entropy is a property of matter so if matter moves out of the system it takes its entropy with it. For a closed system (defined as one that does not permit mass transfer) that leaves only heat.

So for our example, any entropy generated in the system will increase the amount of heat rejected and lower the efficiency of the cycle.

Why would that be the case? (that entropy transfer is heat or mass flow)

Chester Miller has given you a rigorous mathematical basis for irreversible processes generating entropy and reduction in efficiency. I will give a couple of examples to show that entropy generation (whether it involves work or not) in a cycle requires heat transfer to the surroundings even if the irreversible process itself does not involve heat transfer.

A classic example of an irreversible process not involving heat transfer is the free adiabatic expansion of an ideal gas.

A rigid insulated chamber is partitioned into two equal parts. Half the chamber contains an ideal gas. The other half is a vacuum. An opening is created in the partition allowing the gas to freely expand into the evacuated half. Since the chamber is insulated, there is no heat transfer ($Q=0$). Since the expansion of the gas does not expand the boundaries of the chamber, there is no boundary work ($W=0$). Consequently, per the first law, the change in internal energy is zero ($\Delta U=0$). Being an ideal gas, where a change in internal energy depends only on a change in temperature, there is therefore no change in temperature.

The end result is the volume has doubled the pressure has halved and the temperature is unchanged.

Although no heat transfer has occurred, the process is obviously irreversible (you would not expect the gas to spontaneously return to its original half of the chamber). But we can determine the entropy generated by taking any convenient reversible process to return the gas to its initial conditions. The obvious choice here is to remove the insulation and perform a reversible isothermal compression. To do that requires heat transfer to the surroundings. That amount of heat represents “lost work”, that is, the work that could have been done if the free expansion of the gas was replaced by a reversible adiabatic expansion.

This is a bit more complicated. It’s based on an exercise that Chester Miller and I are working on. I will summarize part of it without going into the details.

We have an insulated cylinder containing an ideal gas with a weighted piston sitting on top, so that the initial pressure on the gas is $P_{1}=10 atm$. Refer to curve 1 below. We suddenly remove weight so that the external pressure is halved, or $P_{2a}=5 atm$. This results in a non quasi-static (irreversible) adiabatic expansion against a constant external pressure. Using the ideal gas laws we can determine the final volume and temperature (point 2a) when equilibrium is reached, assuming the initial volumes and temperatures are as indicated for point 1. The work done is simply the external pressure times the change in volume.

Now we wish to return the system that underwent the irreversible expansion (curve 1) to its original state to give us a complete cycle. To do this we can perform an isobaric (constant pressure) compression of the gas from point 2a to point 2 to decrease its volume and temperature to match the final volume at the end of the reversible expansion. This will put us back on the reversible adiabatic curve. But it will also require heat transfer out of the gas to the surroundings. Once again, that heat transfer will be the equivalent of the “lost work” of the irreversible process. We complete the process by now doing a reversible adiabatic compression from point 2 to 1 to return the system to its original state.

For both cases the end result of entropy generation is transfer of heat to the surroundings. 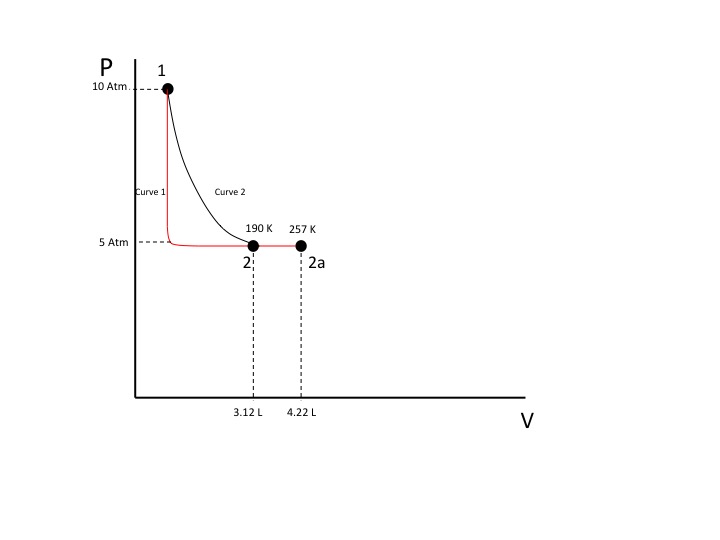 I will make one last attempt to answer your question, using a different (logic based) approach.

With respect to the example in your edit, you have described a process, not a cycle.

Let the system be the engine that lifts the ball. Let the ball, floor, surrounding air, (i.e., everything else) constitute the surroundings. The air in the surroundings transfers heat to the engine. The engine uses this energy to do work on the ball (lifting it giving it potential energy). You have not described the process used by the engine to do the work, so we don’t know if it was reversible or not. It releases the ball. The act of releasing the ball involves no energy exchange. So far, all we have is a process. For it to be a cycle, you need to describe how we return the system to its original state since so far it has lost internal energy in doing the work.

Perhaps you can define the system and surroundings in a different way to show that it is operating in a cycle and that the engine generates entropy.

Maybe a little change in the book's phrase could help ?

The proof is the usual one and result from the definition of cyclic engine with two sources :

So, you don't have to worry about over irreversible processes associated with the work produced by the engine?

Sorry for my poor english !

Any isothermal work occurring during the cycle results in the entropy of the universe increasing by +W/T.

2
Heating up water with a heat pump
2
How is the efficiency of a heat engine related to the entropy produced during the process?
0
Final equilibrium temperature of two reservoirs connected together via a heat engine (thermal efficiency of 50%)
2
Why does taking work from a system not reduce its entropy?
0
Entropy production in a heat engine
0
Heat transfer direction demonstration
0
Calculating coefficient of performance (COP) for Heat Pump
1
Why doesn't a Coefficient Of Performance > 1 violate the second law of thermodynamics?
0
Efficiency of an heat engine with finite hot reservoir