In two dimensions a very nice parametrization of the rotation group is obtained by the following line of arguments:

I would like to know if anybody knows of such a simple characterization for the (proper orthochronous) Lorentz group? Since every element of the Lorentz group can be written using the product of a rotation and a boost, I am particularly interested in the boosts. I would like in particular a geometrical and basis-free description. I seem to be able to retain such descriptions much better. I imagine that the problem statement would be something like

Consider a unit timelike vector $t$ (indicating the 4-velocity of the observer) and a unit spatial vector $n$ (indicating the preferred direction in space). Consider a Lorentz transformation $L$ which leaves invariant $\text{span}\{t,n\}^\bot$. One should then obtain a relation like Rodrigues' formula (see wikipedia) using a geometrically inspired Lie algebra element (I don't understand the geometric content of the usual $K$'s). The parameters multiplying this Lie algebra element should then be clearly identifiable with rapidity or some related parameter.

Special Relativity in General Frames: From Particles to Astrophysics
By Éric Gourgoulhon
ISBN: 9783642372766

Here's a screenshot of page 197 from section 6.6 Properties of Lorentz Boosts (from Google Books). 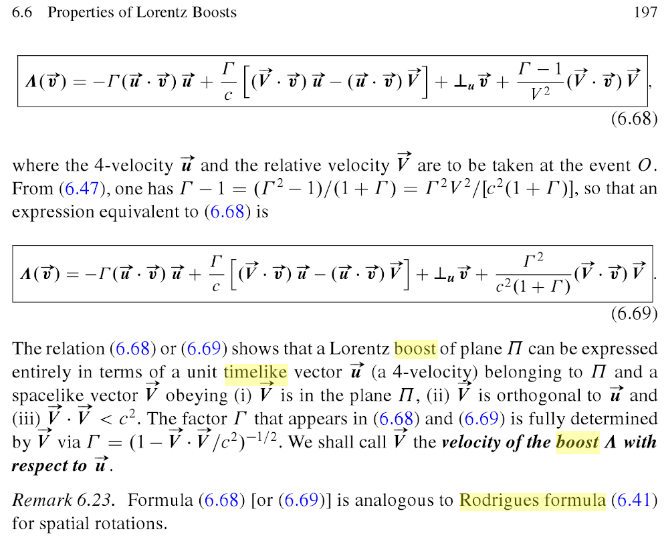 Not the answer you're looking for? Browse other questions tagged special-relativity group-theory inertial-frames lorentz-symmetry geometry or ask your own question.