How is it possible to see stars-light, from stars millions of light years apart with the naked eye? [closed]

How is it possible for us to see stars that are millions of light years 'APART' from one another with the naked eye when we look at in the night sky from horizon to horizon? (i.e., pick any stars light on the right side of the sky and then another as far to the left side of the night sky as you can see).Their millions of light years apart, right? How can we see objects that are 'light years' apart from one another and away from us? I beleive it, I just don't uderstand it! The best answer I've heard is 'perspective'? OK, that's pretty vague, what does that mean? We can't travel those distances but we can 'see' those distances with the naked eye? There has to be simple explanation but I just don't get it!? Can anyone run it through the old 'simplifing machine'? Thank you.

This means that a large amount of light will be launched in your direction at any given time. The light of a star one light year away only has to travel for one year to reach you. And it does. Therefore you can see the star. We cannot travel that fast. Therefore we can see the stars, but not reach them.

The reason you can see two stars at the same time even though they are far apart is indeed because of perspective. Consider these two trees: 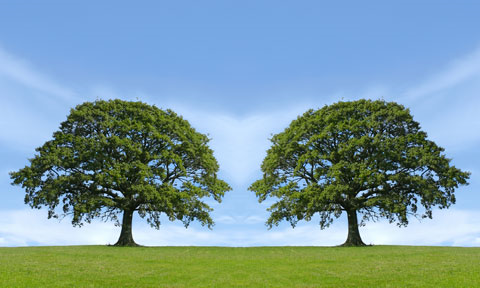 If you stand at a distance, you can see them both. If you stand very close to them, you will have to turn to see both. Now think about you and the two trees as the three points of a triangle. If you extend the points corresponding to the two trees to a larger distance, the distance between them will seem smaller. If they are really far away, they will seem like they are basically in the same point. So the distance between two objects far away from you seems small. In fact it seems smaller the further away the objects are. For something as far away as a star, the distance between two stars may look small, but is indeed about as large as their distance from you.

Photons travel, photons hit your retina and thus you have the ralisation of seeing a star. The fact that we can see objects far away is caused by the fact, that they are very bright. As the universe is isotropic in every point it doesn't matter in which direction you look to see said object.

Edit: as made clear in previous comments, of course the objects at thus distances are not stars, but galaxies, supernovae and other bright objects. Also you might not be able to see them with naked eye or even in visual wavebands. But this shouldn't get the inherent problem of your question, if i got it right.

Not the answer you're looking for? Browse other questions tagged astronomy stars or ask your own question.