Flames with no gravity?

I was watching "Solaris" (Tarkovsky) today, and noticed this: in some moment the space station changed orbit and the people inside experienced zero-gravity. At that moment, a candlestick passed floating in the air, with the candles burning (see).

But in our environment the flames go upward because the hot air is less dense, and that effect should disappear when no gravity is present, am I right? How would a candle flame look then?

Indeed, without gravity, and thus without buoyancy, there is no preferred direction for the candle flame. With gravity, like you said, the products of the combustion are much lighter than the unburned air and go upwards. Fresh air is convected from the surroundings at the bottom of the flame to react with the fuel. Hence why a longer wick will burn better than a one that just peeks out: it's easier to bring in the fresh air (and thus oxygen). Without gravity, the immediate surrounding oxygen would burn initially but there is no convection to get the products out of the way and fresh oxygen close to the wick where the fuel vapor is. Mass diffusion takes over, mixing the products with fresh oxygen coming from the outside but it is a lot slower than convection. Since there is no preferential direction (ie gravity field), the resulting flame is a weak, almost spherical flame. 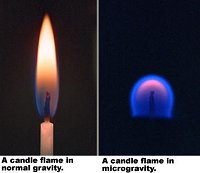 If you want to know more about this, you can google "flame balls", which are NOT a candle flame without the wick: it is not a blob of fuel reacting with the surrounding oxygen, but instead how a combustible mixture of premixed fuel and air/oxygen reacts when ignited locally. The combustion products are inside the ball while the reactants diffuse to the flame. A good starting point is this old NASA page (the picture above comes from there).

Not the answer you're looking for? Browse other questions tagged gravity fluid-dynamics or ask your own question.

0
Why is the direction of a flame is always upward?
4
Flame shape and size (length) depending on gravity
0
Why do a flame point upwards?
1
When we light a candle or kerosene lamp, why fire is turning to a drop shape?
2
What would be the shape of a candle in a zero gravity environment?