I am looking at molecular emissions in laser-induced plasma plumes created in argon at reduced pressure (in the mbar range). To be precise, these are heteronuclear diatomic molecules that emit molecular band spectra which I am investigating.

An important question is how these molecules are formed in the plasma and what affects the lifetime and intensity of these signals. So in one of my experiments I have looked at the time evolution of a molecular signal. It looks very similar to this: 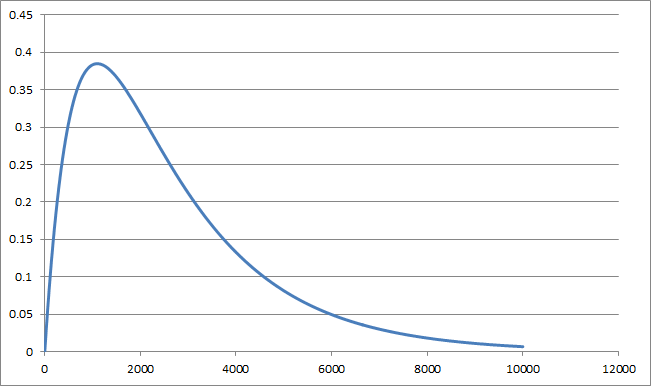 (This is actually a fit of the data using two exponential functions.)

I do not have a theoretical model that describes this behavior, but from looking at the time evolution, I thought that it looks like two exponential functions, so that's what I fitted it with. The above plot is based on the formula $$ I(t) = A e^{-Bt} - A e^{-Ct} \,, $$ where I(t) is the intensity and A, B, C are some fit parameters. This works very well and fits the data very nicely if taken as is. You can basically assume that the plot above exactly shows what my data looks like, minus noise.

So I'm thinking that, since molecular formation is based on chemical reactions, at least the initial increase of intensity is probably related to this. A typical rate equation in this case would be a three-body reaction (two atoms $P$ and $Q$ forming the molecule $PQ$ while a third body $M$ takes up the excess energy). Then the rate equation is $$ \frac{d[PQ]}{dt} = k [P] [Q] [M] \,, $$ with a rate constant that should be given by the Arrhenius equation: $$ k = A_k e^{-E_A/k_B T} $$ I'm however not quite sure whether an activation energy $E_A$ is really physical in the case of elemental three-body reactions in a hot plasma, but I'm no chemist and I'm a bit unsure about this.

In any case, that would explain the initial rise, since that rate equation yields a nice curve that can be described by $1-exp(\dots)$. The decline in intensity is trickier since it is different from the decline in intensity of atomic and ionic signals, which decrease much faster over time. That's why these molecular signals are considered long-lived, and it is usually explained by the fact that they are only stable at low plasma temperatures. But my data contradicts that theory slightly, because the highest intensity is actually found in the beginning where the plasma is still quite hot. Of course, there is the temperature gradient within the plasma - if the temperature drops within the region where the elements forming the molecule are found, it might be possible that there is always a region that has just the right temperature. Then the overall cooling of the plasma would lead to a slow decline of the intensity simply because the signal of the molecule also depends on the temperature and becomes less intense at lower temperatures.

So this is where it gets complicated. There are many potential effects, some of which might be negligible but there's no good data available to be able to differentiate between them. But since the decline can be clearly fitted quite well with an exponential equation I would assume that one effect dominates over the others, and I think that it is the cooling of the plasma.

So I have some idea why I observe the sum over two exponential functions here, and because they are originally a product of the type $(1-\exp(\dots))\exp(\dots)$, they should have the same amplitude.

However, since the signal is weak my data was integrated over a relatively long time - 500 ns, which is about half as long as the initial rise to the maximum seen in the plot (the x axis is in ns). So I have to consider that my actual fit should be the integral over the function I have used so far, from $t$ to $t+\Delta t$ where $\Delta t = 500 \text{ns}$.

But if I integrate the function this way and try to fit my data with the result, it does not work anymore. I still can get a result that fits the beginning and the tail of the curve, but the sharp peak at 1 µs cannot be fitted anymore, the function wants to smooth that out.

So now I'm thinking that I'm missing something, but I don't know what. There are dozens of potential effects that might be dominant here. I cannot make a proper assumption without first having a model that is able to describe my data, because by describing the data I know what I should look for. If it turns out that what I really need is a sigmoid function, then I can narrow down my search by only looking at effects that are expected to saturate over time, and so on.

I also find it extremely weird that my simple model made of two exponential functions works so well, but then doesn't work if I try to correct for the integration time of the measurement. I feel like there is a clue buried here that I am overlooking. This is increased by the fact that if I allow the second of the two exponential functions to have a different amplitude, the fit works perfectly again. The fit function is then $$ f(t) = \int_t^{t+\Delta t} A e^{-Bt'} - A' e^{-Ct'} dt' \,, $$ which again fits the data very nicely. But having two different amplitudes is not a physical solution in the current model, so I'm thinking there's some effect that is still missing in the model.

So it would be great if someone could point me in the right direction here. I don't want a solution, I want ideas how to solve this type of problem. I want advice how to proceed methodically in order to get to the correct result. I would really appreciate that.

It's very hard to say anything useful without being deeply steeped in the particulars of your experiment.

However, it sounds like a huge fraction of your conceptual space is revolving around exponential decay, but you're not really using one of the main tools used for understanding those trends - namely, logarithmic scales in your plots.

If the decay section of your plot is really exponential, then if you plot your data in a log-linear plot you should be able to get a nice clean linear asymptote in that plot.

What I would suggest is to subtract out that dependence, and then see what's left. That is:

If your intuition of two subtracted exponentials really works, then that last log-linear plot should produce a clean straight line. If it doesn't (which would be the case if e.g. a better model for your data were $y(t) = A\:t\: e^{-a t}$), then you'll have some additional views on your data which might offer some interesting insights.

Not the answer you're looking for? Browse other questions tagged experimental-physics physical-chemistry models or ask your own question.

7
How to guess the correct fitting function to some data?
1
On deriving a fluid flow pressure drop model using either physical theory or empirical methods
0
How to model a water plant valve
0
Interpolating experimental data correctly (limited model knowledge)
2
Is there a way to calculate the permittivity of an alloy of two materials with the Lorentz Drude model for both of the materials separately?
5
Liquid density as a function of pressure and temperature, how to model experimental data of $\rho(p,T)$?
1
What is the scientific method for finding a theoretical explanation for experimental data?
1
Extracting yields of decays from fits
35
How seriously can we take the success of the Standard Model when it has so many input parameters?