Does it take energy to move something in a circle?

Let's say there's a ball and a (physically ideal - no friction etc.) robotic arm situated in otherwise empty space. The arm takes the ball, moves it around in a circle, and then returns it exactly to where it started. The arm also returns to its starting position.

In this case, there is no displacement overall. The ball and the robot arm are in the exact same positions as when they began.

However, this disagrees with my intuition, because if I were to make a robot arm that would do this, I feel like I would need to give it an energy source (for example, a battery), and that by the time the robot was done, I would have lost energy from that battery.

Does the movement require energy? If so, where did I mess up in my calculation? If not, why would my robot need a battery pack or some energy source in order to make this movement? (If it doesn't, please explain.)

Many objects move in circles without needing any energy.

This starts with stuff like geostationary satellites, continues with moons that orbit planets, goes on to planets orbiting stars, stars orbiting other stars or black holes, and stars orbiting their galaxies' center of mass. All of these perform thousands, millions, and billions of rotations without any need for energy.

Of course, these objects all need to have sufficient kinetic energy to be able to orbit in the first place. An object that's stationary with respect to earth, will just fall down. To get it to orbit earth, it must be accelerated first, and that needs energy. And if you want to get it stationary again after it has completed an orbit you have to decelerated it again. However, while the object is orbiting on a circle, its kinetic energy remains the same all the time, no energy needs to be put in or removed.

However, that's not the entire story. Because, when an electrically charged object goes in circles, it emits electromagnetic radiation. A circling charge induces a magnetic field. That is what happens in any electric motor, including the one that spins your computer's fan right now. The reverse process works as well, a changing magnetic field accelerates charges round in circles. That's the working principle of any electrical generator, including your bike's dynamo.

Even more curiously, what can be said about the electro-magnetic field can be said about the gravitational field as well: Rotating masses emit gravitational waves, which carry away a tiny amount of energy. Usually we can totally ignore this kind of effect, but when really heavy objects (like black holes many times as heavy as our sun) dance around each other really closely, and really fast (like going round ten times per second or more), that tiny bit of energy loss can amount to the equivalent of three times the mass of our sun radiated away as pure gravitational wave energy... (https://en.wikipedia.org/wiki/First_observation_of_gravitational_waves)

You can move stuff around in circles without needing energy, as long as the object is not electrically charged, and losses to gravitational waves are negligible. Which is pretty much always the case.

However, when electro-magnetic or gravitational effects enter the stage, that's where the real fun starts...

And, at least for the electro-magnetic effects, you personally rely on them every single day.

First, you are not equating the work done correctly. This is a good physics lesson. Please understand your equations before you use them. Blindly plugging in numbers will not work out. The equation you give is only true for motion in one dimension and with a constant force. Plugging in $0$ for displacement is not correct here. In general you need to look at infinitesimal displacements $\text d\mathbf x$ and calculate the work $\text d W=\mathbf F\cdot\text d\mathbf x$, then integrate (add up) the total work.

Now, I am assuming the ball starts and stops at rest. Therefore, the arm does work to increase the ball's speed, and then it does the same amount of negative work to bring it to rest. So the net work is $0$, but it is because the total change in kinetic energy is $0$ (since $W=\Delta K$), not because the displacement is $0$ around the circle.

The definition of work is energy = force * displacement * cos(theta)

This definition is only strictly accurate for movement on a straight line. In general, you need to solve an integral

Does the movement require energy?

Two reasons a real robot will require energy to do this operation:

If we can neglect external gravitational or electromagnetic fields then we only need to consider the kinetic energy of the ball. This is zero at the beginning of the motion and zero at the end, so the net change of energy in the ball is zero.

If we assume an ideal robot arm (no friction, perfect conductors, no air resistance etc.) then the energy that the robot arm puts into the ball to accelerate it at the start of the motion can be 100% recovered when the ball decelerates at the end of motion. So the net loss of energy from the robot arm is also zero.

In practice the robot arm will lose energy due to friction, resistive heating, air resistance etc.

NO, an ideal robot can move the load in a circle (actually in any closed curve, not just a circle), producing zero total work done and hence no loss of energy. However, in order to do that, the robot must:

The robot will need energy in general, especially if the circle stands vertically like a Ferris wheel. Only an ideal robot would be able to recover all the energy back at the end of the loop.

A great example of such a machine is the Buzz Aldrin cycler. It is a "space bus" that travels between Earth and Mars essentially for free because it travels in a closed loop. In space, it is relatively easy to satisfy the two conditions above in a significant degree.

If the robot arm is extended holding the ball and rotated horizontally, then the energy required would be calculated using torque, using the distance of the centre of mass and the total mass being moved by the motor.

Let us say that with the arm extended the centre of mass is 0.5m (distance from axis) and the total mass of arm + ball = 5kg, the torque rating is 10 Nm. Because torque is a rotational equivalent of linear motion then power = torque x 2 x pi x rotational speed (revs per second) (https://en.wikipedia.org/wiki/Torque)

Therefore, if we say the arm takes 1 second to complete the circle, the power required is 10 x 2 x pi x 1 = 62.83 Watts (= joules/sec). A typical stepper motor for a robot arm with a reach about 1m would draw 12V, therefore would have to be rated at 6A which in a perfect system would be capable of delivering 72 Watts.

The infinitesimal work on an object is $Fd\cosθ$. If any of those quantities aren't constant, then we have to take the integral over some path. However, all paths will the same starting and ending conditions will yield the same answer. If the ball ends up in the same condition that its started in, then it hasn't had any work done on it. So this is not the central issue.

In any real world system, there will be some loss of energy to heat. No motor and no regenerative braking system operates with perfect efficiency. But in an ideal system with no friction or other inefficiency, the robot arm could indeed move the ball and end up with the same amount of energy in its battery, and thus this would not use up any energy. However, we would still have to have some energy to start with to power the system, even if that energy isn't used up.

Interesting question and a simple answer here. Newtonian first law claims, that: $$\frac{\text d \mathbf v}{\text d t} = 0$$ In words it would be: If net force applied to an object is zero, then object's speed must be constant

Your object moves in a circle and that means, that it changes speed, because speed is a vector which has magnitude and direction: 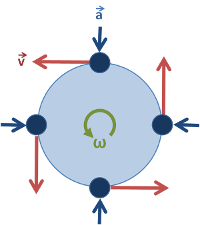 So if direction of movement changes, speed changes also. And if speed changes - there MUST be a force acting upon an object. And for keeping force, you need an energy of course.

Not the answer you're looking for? Browse other questions tagged newtonian-mechanics energy rotational-dynamics energy-conservation work or ask your own question.

0
Why is work done by non-conservative force around a closed path not zero?

0
Block on cart, equation of motion
1
Does an opposing force cause loss/ waste of energy?
1
What's wrong with this idea for recover energy from pressure?
2
Conservation of energy in a solenoid
1
Kinetic energy for generalized coordinates?
1
Work done to slide a circle over another circle assuming a horizontal force and no friction