I'm thinking phase space 1 is impossible since it asymptotically approaches a certain x value, which is impossible for speeds that get lower and lower as the point is approached.

Can anyone point me in some direction to find the physical systems that create the phase space? 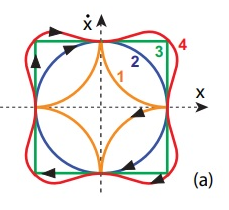 I assume that by classification, you are asked to comment on the broad nature of the potentials producing these trajectories. Indeed, 2 and 3 are for the harmonic potential and the square well potential. Let us use $\dot x= p$ for simplicity. You might be asked to take a wild stab at the parity and x-p-symmetric plane curves for the conserved (constant) energy E depicted here, which specifies the Hamiltonian, ipso facto.

I'll ignore 4, since you appear comfortable with it―it is reminiscent of the double-well potential $(x^2-1)^2$ trajectories, except it is parity and coordinate-momentum symmetric. It must have a name I don't know (Vinnikov quartic?).

The freaky deceleration cusp around x=0 at the top of your figure is represented by $$ \frac{dp}{dx}= -\sqrt[3]{p/x} ~, $$ and you may similarly investigate the other three, mutatis mutandis.

This is a wildly idealized problem, so I don't imagine you are asking for realistic physical realizations of it, but there must be something around... there always is.

I don't disagree with @CosmasZachos but here's a complementary observation. (Thanks to @kkm for his nice comment.)

For a time dependent system trajectories in phase space are curves of constant energy $E$. So each case 1, 2, 3, 4 should be given by some function of $x,\dot x$ such that the locus of points where $$ E=f(x,\dot x) $$ for fixed $E$ is given by said curve (for a different $f$ for each curve). Given $f$ you can then identify the Hamiltonian, or try to.

Curve 4 is not in this class but @CosmasZachos identified it anyway so I will not be commenting on it.

As I commented above I think this problem isn't especially illuminating...

Not the answer you're looking for? Browse other questions tagged homework-and-exercises phase-space or ask your own question.