How does resistance convert voltage to current? [closed]

This is a statement that I read mainly on books about electronics.

Could someone explain why after the resistance current is what makes things work and not voltage?

Example from the Art of Electronics of Horowitz/Winfield:"

Roughly speaking resistors are used to convert a voltage to a current and vice versa.This may sound awfully trite

Also it is a common practice when someone is working with solenoid proportional valves: A resistance is added before the solenoid so that it shall be controlled by current and not voltage because voltage will drop in case that temperature will rise.

A resistor can be used to convert a voltage SIGNAL into a current SIGNAL.

Thus the voltage SIGNAL at V in is converted into a current SIGNAL, namely the current flowing in R in (which I have named I in.)

The operational amplifier responds by adjusting the output voltage V out to maintain its two inputs at the same voltage. V out is sent to the load, an also causes a current to flow in R f. This creates a feedback current SIGNAL I fand the op amp works to keep the current in both resistors equal so that there is no net current at the input.

And the circuit amplifies the signal according to the equation 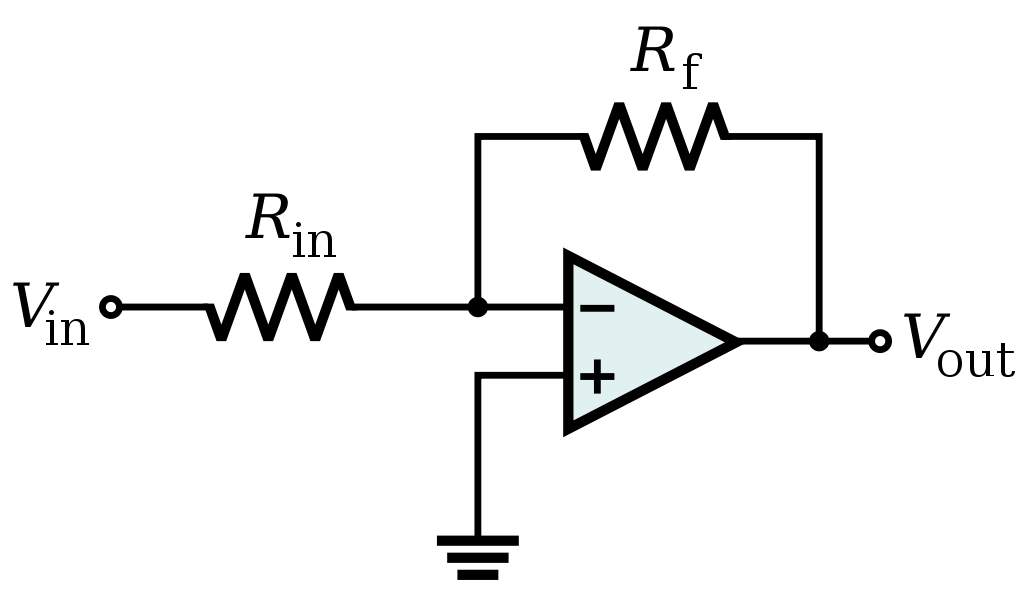 There are many other circuits where a resistor is used in this way. It relies on there being a point in the circuit where the voltage is constant, but a variation in current can achieve some effect in the circuit. In such cases, a current signal is required, but if all we have is a voltage signal, we can use the fact that the flow of current in a resistor is proportional to the voltage across it to convert a voltage SIGNAL into a current SIGNAL.

This answer has already crossed the line from physics to electronics engineering. Any further details would be best asked on Electronics stack exchange.

Where did you read that? That's not really a correct statement if its all by itself.

In context, I'm assuming the book is referring to $\frac{V}{R} = I$, which is a correct statement- but then again, so are a lot of statements if you put them in context.

I think you should try to make your question more specific as to what specifically is confusing you, but I'll try my best to explain, with as few equations as possible:

First off, it's not voltage (directly) that causes charges to move through a circuit. It's an electric field that forms within the circuit and pushes charges (electrons) through the circuit.

(And if you want to get really specific, it's an electric field due to rings of charge that build on the circumference of the components of the circuit - but that's for another question.)

However, what causes this electric field in the first place?

(What causes the rings of charge that create an electric field throughout the entire circuit)?

Usually, it's a battery inserted somewhere in the circuit. Without getting into the specifics of how a battery works, let's just say there's an overabundance of electrons on one side of the battery and a lack of electrons of the other side, and since electrons repel each other, they want to move from the side with more electrons to the side with less of them.

This cramming of electrons creates an electric field opposite to the direction the electrons want to move (since the electric field points from positive to negative, while electrons move from negative to positive). Again, this isn't REALLY how a battery works, but it's just meant to be a super handwavy explanation of what a battery does

The electrons' velocity is approximately proportional to the strength of the electric field created by the battery. We could go into the details of why that is, but it's really for another question.

Now, let's get back to voltage, and your original question. I said we weren't going to get into the specifics of how a battery works, but there is one thing you have to accept: for some (electrochemical) reason or another, when you purchase a battery, it doesn't come with an "electric-field rating" that tells you how big of an electric field it'll create when used to power a circuit. No! Batteries come with their VOLTAGE specified! They come with the potential difference between the positive and negative terminals specified!!!

(From the wording of your question, I sugggest you try and understand voltage in the context of electro-statics and electric fields before trying to understand Ohm's law, and stop reading my answer here. But, for after you've understood voltage, I'll continue anyways!)

Let's look at what the fact that batteries come with a set potential difference between the positive and negative terminals implies.

Let's now put the three relationships together. We have:

Putting them all into one...

Now, all Ohms did (or whoever invented the concept of resistance) was give the term $\frac{\rho l}{A}$ a name. He called it the RESISTANCE of the wire.

And thus, the current through the wire is given by:

Which agrees with the wording of your original question. YAY!!!!

Hope that helped :). Please suggest edits and comment if something's confusing!!!! I'll edit this answer as much as need be - after like 40 minutes of writing, I'm really attached to it!!!

Best of luck with your electrical endeavors!

"Resistance converts voltage to current" is not an accurate statement.

The electric potential difference maintained by the two ends of a battery creates an electric field through the circuit. Charges flow along this electric field in an attempt to minimize their energy.

But materials have large numbers of densely-packed atoms, so the electrons have to bounce around, colliding with atoms in an attempt to get to the bottom of the potential well. They actually move quite slowly for this reason. This is a basic model of resistance.

I don't know if this helps you---perhaps I'm misunderstanding the statement you say you read in books, but I think it is a false statement.

I could imagine the resistance being thought of as a "conversion factor" or sorts, giving the corresponding voltage for a given current via Ohm's law, which is taken as faith in some electronics books. But I think that's not particularly physically helpful.

In regards to the new update on Solenoid Valves (this question was EXTREMELY open to interpretation as of the original wording):

The reason you put a resistor in front of a solenoid is usually to prevent too much power dissipation.

When you first engage the solenoid valve (not sure if "engage" is the correct term - but you know what I mean) you want a really high initial voltage and current to make make sure the Solenoid opens the valve, and does so quickly. Depending on how much weight the solenoid needs to pull in, you can make the initial voltage higher or lower - the point is, you want a high voltage to make sure the Solenoid does its job.

Just for those of you wondering what a solenoid valve looks like: 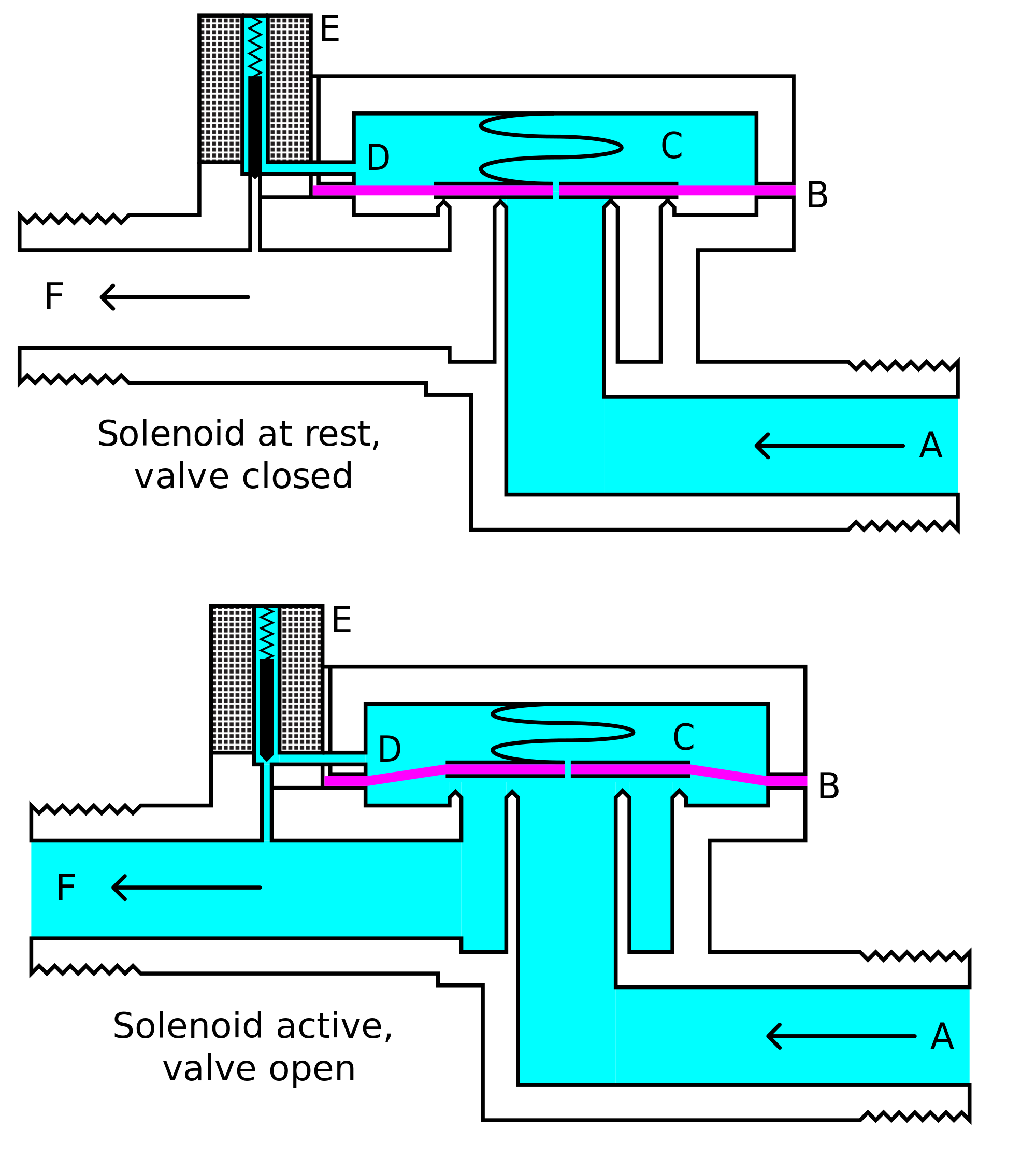 However, once the solenoid has "pulled in", it doesn't require as much of a current to hold the valve in place.

Running the solenoid at the high initial voltage for too long will heat it up and thus increase its resistance (most solenoids come with, not high, but not insignificant resistance. Quoting quora: "Because a solenoid is typically very thin wire and (as you note) a LOT of turns. The resistance of copper is low, but it is not zero. 22 gauge copper wire has a resistance of 0.016 Ohms per foot. Wind 100' in a solenoid and its resistance is about 1.6 ohms.") By heating it up (especially since its very thin wire), you're going to be increasing that resistance.

Even if the heating isn't a problem - if the solenoid doesn't require as much of a current to stay engaged, why waste electricity when you don't need to?

People sometimes put in some sort of resistor in series with the solenoid that kicks in once the solenoid has pulled in, to lower the current through the solenoid. This will prevent it from heating too much.

However, a more efficient method that prevents power loss is to use pulse-width modulation. Even though that won't work when you first need to engage the solenoid, after the solenoid already pulled in, PWM will be enough to make it keep the valve in place, and cut power by a lot!!

Not the answer you're looking for? Browse other questions tagged electricity electric-circuits electric-current electrical-resistance voltage or ask your own question.

9
Does Ohm's law $V = IR$ mean voltage causes current, or does it just say that voltage and current are related?
4
Is thermal dissipation of resistors a thermodynamic necessity of the Ohm I-V relationship?

3
How does a voltage independent current source work?
38
I don't understand what we really mean by voltage drop
4
How exactly does a resistance reduce current?
1
Given Ohm's law, how can current increase if voltage increases, given fixed resistance?
0
Circuit with voltage source, resistance and current source
1
Which decreaces when resistance changes, voltage or current?
2
How does resistance *really* work? (DC, battery, LED, atoms, electrons)
47
What *exactly* is electrical current, voltage, and resistance?