Lenz's law and the motor effect 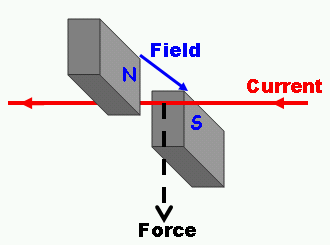 The picture shows the basic motor effect, which can be described with Fleming's left-hand rule. There are two cases of what could be happening however.

Case 1: There is a force applied to a wire such that it moves through a magnetic field, this induces a current to flow (the direction of which can be found using Fleming's left-hand rule)

Additionally Lenz's Law states that an induced current will flow in the direction as to oppose the movement which created it.

There is obviously a mistake that I am making somewhere but I can't spot it. Can you please help me figure this out and don't hesitate to ask additional questions if my question doesn't make much sense or is ambiguous.

Now, in this case, I am a bit confused, because if your wire is an infinitely long, infinitely thin wire, no current will be induced simply by your moving the wire through the external magnetic field. There is no loop, so there is no sensical magnetic flux to insert in Faraday's law of induction, in a manner of speaking. So I'm not really sure how Lenz's law would apply anyway.

I confirm that your diagram has the force in the correct direction for case 2. In order to clarify case 1, the main thing you need to do is focus first on the velocity of the wire, not any forces that may be acting on it. If your diagram shows the direction of an induced current, then the wire in your diagram is moving vertically upwards. This induced current results in the force directed as shown; this force opposes whatever other force is acting to maintain the motion of the wire in the upwards direction: an example of Lenz's law.

That's the answer to your question, but I will now take a moment to introduce another, and I think better, way to think about directions here. This way only really helps someone already familiar with vectors and the vector product, but anyway here it is. The starting point is to put to one side all left hand and right hand rules, and focus on a single equation: $$ {\bf f} = q ( {\bf E} + {\bf v} \times {\bf B}) $$ This is the formula for the force $\bf f$ on a charge $q$ owing to an electric field $\bf E$ and a magnetic field $\bf B$. This single formula is itself sufficient to describe every possible interaction between charges and electromagnetic fields. It covers both situations addressed in your question, but it has to be applied with care to case 1. To use the equation you do need to know how to find the direction of a vector product; I'll explain that at the end.

In the case of magnetic field with no electric field, just set ${\bf E} = 0$ which is what I shall do in the following.

First let's consider the case of current in a non-moving wire. This is your case 2. Take the current carriers to be of charge $q$ and then $\bf v$ is their velocity and the formula tells you the force on them that results from an ambient field. That's all there is to it. I'll explain precisely how the direction of the force is obtained from the formula after discussing case 1.

Case 1 is a little more complicated. If you are acting to move a wire or other conductor through a field, then notice that in order to generate a current it is not sufficient merely to apply a force to the wire. For example, if there were an equal opposing force (from glue or something) and the wire didn't move then no current would be induced. You must actually move the wire, i.e. give it a velocity. To get a good understanding of this you should focus on the fact that it is this velocity which really counts here, as opposed to the force you may be applying. But we'll calculate the force anyway.

Owing to the motion of the wire, all the charges in the wire are moving through the field, in a direction roughly perpendicular to the line of the wire (in a typical case), and they experience the force $\bf f$ as described by the above equation. e.g. If the field is as in your diagram, and the wire is moving upwards, then the force $q {\bf v} \times {\bf B}$ pushes the charges so as to make the induced current in the direction shown in your diagram. If the wire is part of a circuit, then current will flow accordingly. As a result, the conduction charges in the wire now have a component of velocity along the wire (the conduction charges are the ones that can move along the wire, which is electrons in practice, and this introduces a further issue about signs owing to their negative $q$, but stick to the formulae and everything will be ok). Now the situation is like case 1! A current-carrying wire is in a field. So there will be a further component of the force on the charges, and in this example it will be downwards (says the same formula applied again). This force opposes the one you are providing in order to move the wire.

Finally, here is how to find the direction of a vector product.

Use your right hand (and note that you only ever need a right hand to do all of physics and mathematics; left hand rules are merely confusing and can all be dropped). Start by holding your hand flat with your fingers pointing along the first vector, i.e. ${\bf v}$ in this case. Then keep your palm fixed while you bend your fingers from their base until your hand forms an angle (between palm and and fingers) and your fingers are pointing along the second vector, $\bf B$. Your thumb will now be pointing along the direction of ${\bf v} \times {\bf B}$ (don't bend your thumb!). This is because if you couldn't flex your fingers the right way to get them to move from $\bf v$ to $\bf B$, then you had to turn your hand over. Once you are used to performing this operation, you will find it comes quicker and you can just use a half-closed fist each time, with thumb telling the answer. You must remember to move your fingers always from the first vector to the second in the vector product.

This answer has been modified, in order to use the more sensible interpretation of the diagram pointed out by Andrew Steane.

"Case 1: There is a force applied to a wire such that it moves through a magnetic field, this induces a current to flow (the direction of which can be found using Fleming's left-hand rule)"

If the current is right to left, Fleming's left hand motor rule shows that the motor effect (or Laplace) force experienced by the wire is downwards (as shown). This force therefore opposes – in accordance with Lenz's law – whatever force (not shown) is being applied to move the wire upwards!

0
Misunderstanding of Lenz's law
1
Faraday's law or Lorentz Force
0
Rigorous formulation of Lenz's law
2
Which provides the energy for induced current at the starting moment of the lenz's law
0
Why is the direction of current in a wire different depending on if a force induced a current or a current induced a force?
0
How to find the direction of current in this rotating loop in a magnetic field using right-hand rule for moving charges?
1
Lenz's Law - Is the force exerted to oppose the motion always a magnetic force?
0
Which way does current flow if induced by a magnetic filed if two current are produced in opposite direction simultaneously?