Why are matter fields predominantly fermions?

Apart from the Higgs, all matter is made up of fermions. Is there any obvious reason why that is?

Even if we restrict ourselves to massive, stable particles, it's not necessarily true that matter is predominantly made of fermions.

OK, so now say we restrict to fundamental particles. This is kind of problematic, because we have no way of knowing what particles are ultimately elementary. At one time alpha particles were considered elementary. Someday we may find out that quarks are composites of bosons.

But all right, let's say that now we're down to describing "matter" as massive, stable particles that are described as fundamental in the standard model. Well, this kind of doesn't make sense, because a lot of the mass of ordinary matter comes from the energy of the gluons inside the nuclei. So then we're in the absurd position of saying that trees and rocks aren't made out of matter. Maybe that's true in some sense, but it calls into question whether we can really define "matter" in any useful way without abandoning any hope of agreeing with common usage.

By the way, another possible counterexample is that axions could be a component of dark matter.

The distinction sometimes made (like in the plot from Wikipedia, reproduced below) between 'matter particles' and 'force carriers' is artificial and unhelpful. 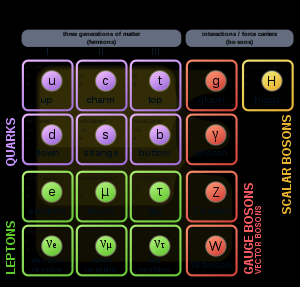 OK, day to day matter is made from electrons, up quarks and down quarks but that is just because they happen to be the lightest particles which form bound states. Extending the "matter" label to other quarks and leptons has no real basis. It is a label added by humans which may help some of them, but has no fundamental meaning.

Basically there are just fields, with different spins, and interactions between them.

Let us look at the definition of matter (https://www.merriam-webster.com/dictionary/matter): "material substance that occupies space..." (and yes, I do pick and choose:-) ) So it is more natural to associate "occupying space" with fermions due to the Pauli principle. But again, this does depend on the definition of matter, and arguing about definitions is not very productive.

I think there are mainly two issues here: mass and the phenomenon of one body resisting that another should occupy the same space.

Most of the mass of what we call matter arises from gluons and interaction energies; it would still be there even if all the quarks had zero rest mass, for example, so I think it not true to say that mass comes from fermions.

But I would be willing to say that matter is made of fermions, with bosons also playing a role such as the one just mentioned. This is because we choose to apply the label 'matter' to stuff which has the sort of behaviour which is captured by the Pauli exclusion principle. One piece of matter can't easily sit in the same space with the same momentum as another. The counterexamples such as Bose Einstein condensation don't extend to all degrees of freedom of the stuff involved. Also I think the conservation laws surrounding things such as lepton number are significant here.

Why are matter fields predominantly fermions?

Fermions have mass, and in this sense can be called matter fields.

In the Standard Model bosons have mass too, the Higgs, the W+/- the Z. They are less in number. The gluons and photons are massless.

Can we have classical matter without fermions in the underlying quantum mechanical level from which classical emerges?

Fermionic matter is a necessary item in building up nuclei and atoms. The Pauli exclusion makes up the shell model of the nuclei and electron "orbitals" stable. Fermions cannot occupy the same energy levels.

Without the spin 1/2 for quarks, protons and neutrons would not form so that they could build up nuclei. There would be a charged or neutral glue-quark ball.

Without the spin 1/2 electrons there would be no atoms, as at best all the electrons neutralizing the glue-quark ball even if in a bound state, would be at the lowest energy level.

No periodic table, no chemistry, no matter as we know it.

So fermionic fields are necessary for the emergence of matter as we define it classically.

Not the answer you're looking for? Browse other questions tagged particle-physics standard-model fermions matter or ask your own question.

7
Why does the Higgs field only couple to opposite-chiralities fermions?
3
Intrinsic parity of fermions and anti-fermions: why are they opposite?
3
Why are stable fundamental particles fermions?
4
Fields: Bosons vs Fermions
2
Why are composite fermions either bosons or fermions but not neither?
4
Time reversal symmetry implies that fermions are massless?