Does rolling friction increase speed of a wheel?

I know there are a lot of questions about rolling friction, but I couldn't find any that addressed my specific problem.

Note the following picture where the wheel rotates clockwise. The rolling friction force $\vec{F}_R$ points in the same direction as the rotation.

Normally, rolling friction inhibits the movement (speed $\vec{v}$) of the system. However, since the force is pointing in the "backward" direction, it looks like it is increasing the speed of the wheel. Therefore, it should accelerate the system. This seems unintuitive to me. Can someone please clarify this contradiction? 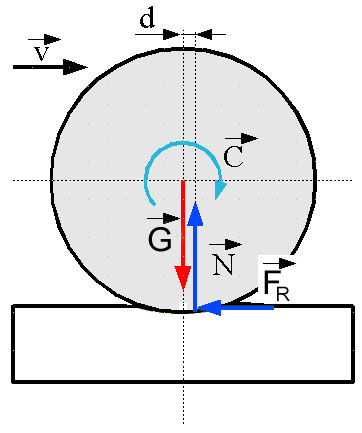 Based on the comments and answers, I have reconsidered the diagram and terminology. I mean rolling resistance and no static friction. The deceleration force caused by deformation (and other reasons). In the diagram above, this force is divided into its x- ($\vec{F}_r$) and y- ($\vec{N}$) components.

$\vec{v}$ is not independent of $\omega$ for pure rolling, since $v=R\cdot\omega$. To me, it looks like the resistance $\vec{F}_R$ that slows down the system accelerates $\omega$. And because of the kinematic connection between $\omega$ and $\vec{v}$, the latter must also increase. That's illogical, but I don't understand the reason. Maybe some comments or answers have already addressed that, but I don't understand :( This is really confusing.

I believe all you have is a misunderstanding of some terminology.

Rolling friction refers to the collection of effects that cause a wheel to resist rolling forward, not all of them being actual friction. These effects are dependent on the specific nature of the system, and are generally not modeled in detail in classical mechanics. For instance, if the wheel is on an axle, friction in the bearings can cause resistance. If the wheel or the contact surface are deformable, that deformation zaps energy from the rolling of the wheel, causing it to slow.

The frictional force in your diagram is actually static friction, which can theoretically provide any necessary force to prevent slipping at the contact point.

You are right in saying that the rolling resistance increases the angular speed. But I think your confusion is mainly because

$\vec{v}$ is not independent of $\omega$ for pure rolling, since $v=R\cdot\omega$. To me, it looks like the resistance $\vec{F}_R$ that slows down the system accelerates $\omega$. And because of the kinematic connection between $\omega$ and $\vec{v}$, the latter must also increase.

Whatever you have written is correct, but for clarification, we will consider two cases. One where a net external force is acting on the system, and one where it isn't.

With external force (Gravity in this case) 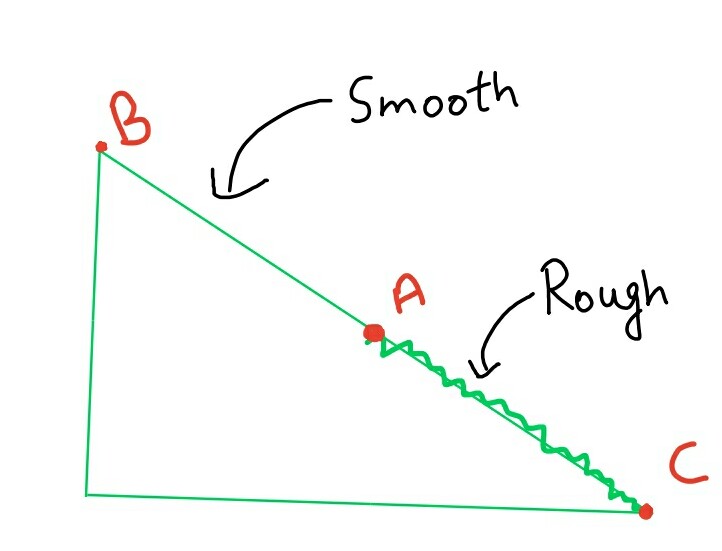 Consider a sphere on an inclined plane, with the upper half of the plane as smooth, and the lower half with sufficient friction for rolling.

Here, as usual the body will have an increase in its speed while sliding on the frictionless surface from point B to point A. But after point A, the speed will decrease, but angular velocity will increase. This seems to go exactly opposite to $v=R\cdot\omega$. Right? The reason for this is that pure rolling hasn't started yet - it is transitioning, so this formula is not yet applicable. Here, the resistance is doing negative work for translation, which is exactly equal to the positive work on rotation(you may use equations of mechanics to prove this).

In short, here the resistance is extracting some energy from translation and gives it to rotation, until they are in such a way that the condition for pure rolling is satisfied.

After point A(once pure rolling has started), whatever you are saying is valid, as obviously, the sphere will speed up while rolling down the plane.


Without an external force and considering deformations

We have our good ol'blue sphere rolling towards right on the ground as shown here. 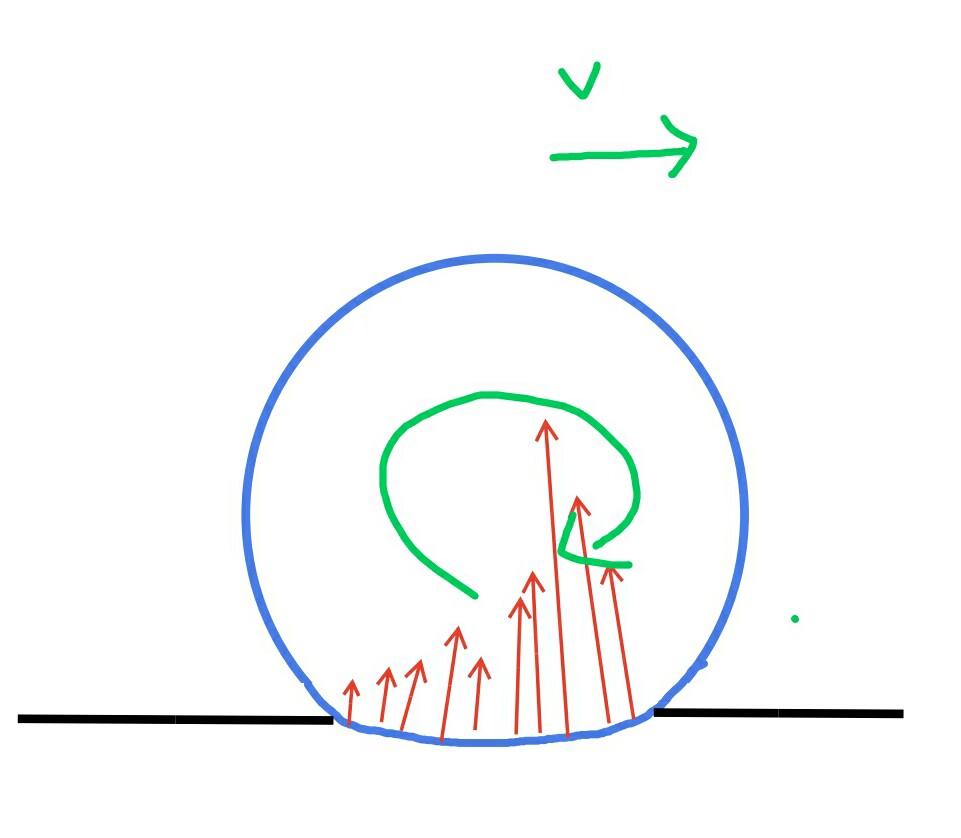 Here, a portion of the sphere is in contact with the ground, and the points on this portion will existence the force due to ground. In the figure, the red arrows indicate the forces, with their length proportional to the magnitude. The forces at the front will be greater than the forces towards the back. This is also clear according to this which says:

The resulting pressure distribution is asymmetrical and is shifted to the right. The line of action of the (aggregate) vertical force no longer passes through the centers of the cylinders. This means that a moment occurs that tends to retard the rolling motion.

To analyze the forces, we can assume an equivalent force $F$, which will produce the same effect as all these forces combined, and will act as shown below: 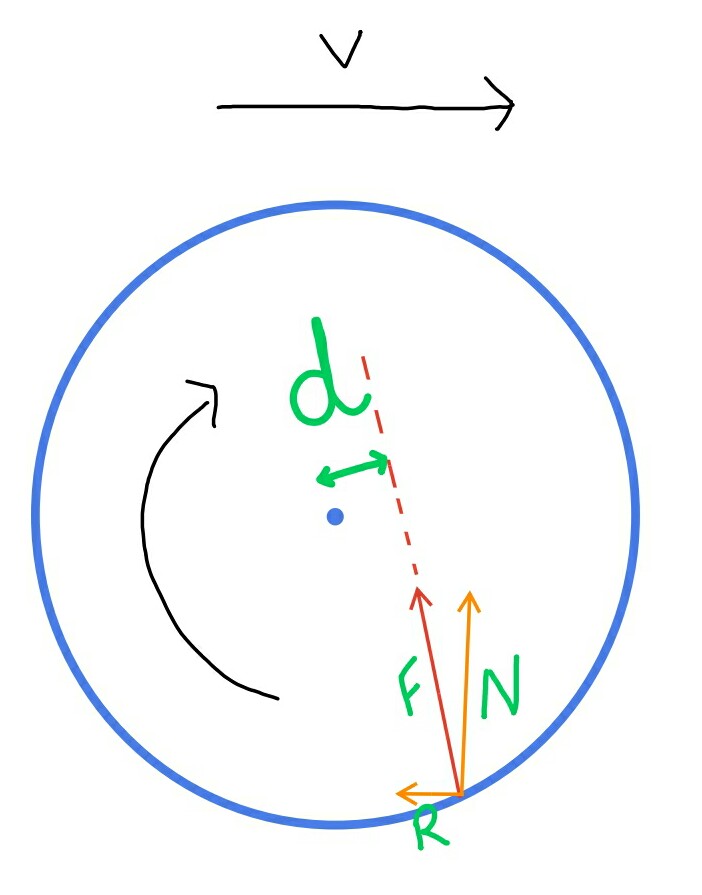 Here, the torque can be given as $F.d$ which will act against the rotating motion(You can use simple geometry to understand why it will act against. If any issues with that, feel free to ask for clarification in comments). Further, this force can be divided into two components to analyse the resultant acceleration. The vertical component $N$ will not contribute towards linear acceleration as it will be balanced by the weight, whereas the horizontal component $R$ will act as shown, and contribute towards retardation, opposing the velocity.

In the end, it can be concluded that both angular velocity and linear velocity are decreasing due to the deformations.

We did not use the components to analyze the torque because both would produce torque in opposite directions, and there comparison might not be very obvious.

Apart from these, the following also contribute towards rolling resistance

The force pointing backwards is not increasing the SPEED...rather it is increasing its ANGULAR SPEED.

If you want a condition where rolling friction increases the SPEED, consider the condition when a rotating ring (or any other object capable of rolling) is kept on a surface. In that case the rolling friction will try to nullify the speed of the point of contact by increasing the SPEED and decreasing the ANGULAR SPEED until Rw=v...where w is the angular velocity, v is the speed and R is the radius.

The diagram which you have given corresponds to the opposite case. Here, the object is given only a SPEED without ANGULAR SPEED. So, the force tends to increase ANGULAR SPEED and decrease SPEED to reach the required condition of rolling motion.

The body slows down because force other than friction are acting on the surface of the body in contact with the surface which is called the rolling resistance. Also the air resistance also contributes in decelerating the body. Moreover the the surfaces are not perfectly smooth. There are certain deformations(which are not visible to our naked eyes) , roughness etc both on the body and also on the surface this results in irregular directions of the normal force at each point of the surface in contact which provides the rolling resistance(horizontal component of the inclined normal force is responsible for slowing down the object). Also the rolling motion in the world is not pure rotation there is always some skidding or slipping which gives rise to kinetic friction which opposes the motion of the body thus slowing it down.

Rolling resistance, friction, deformation, all waste energy and drain power by turning it into heat and or do small nonconsequential work on road aggregates like shouting sand from under the tire.

I used to ride bicycle at college, and one of the things every bicycle rider does before a race is to pump the tires up to 110-120psi. This will encourage a more rigid characteristic behavior of the tire and reduce deformation of the rubber at the cost of a bit of discomfort.

Basically you would limit the friction just to enough static friction to give you the acceleration early on without any skidding, never encroaching into kinetic friction, and when you get going ideally you wish to have the least amount of friction of any kind.

2
Why does less friction in a wheel result in more speed?
23
What is the cause of rolling friction? & why is it less than sliding friction?
11
The direction of frictional force in smooth rolling motion