Conservation of Energy in a Capacitor

Consider a parallel-plate capacitor in free space. A negatively charged point particle with initial velocity $v$ passes through the space between the pair of parallel plates (with an initial path perpendicular to the normal vector of the plates).

The point particle accelerates towards the positively charged plate but passes beyond the edge of the plate.

How is energy conserved, given that the capacitor does work on the particle by accelerating it in the direction towards the negatively charged plate?

EDIT: Was reminded by Art Brown that a negatively charged particle accelerates towards the positive plate.

This question is quite a common one for those first learning about capacitors.

So, the field generated by a floating capacitor has to be conservative. The universe isn't crazy, so it's probably us missing something? Are there any assumptions that we made while calculating the field? Yes, there are:

We assumed that the capacitor was infinite in size, and thus the field became uniform.

But, here, we are dealing with the edges of the capacitor. The field is not uniform here, it is more like (second half of image): 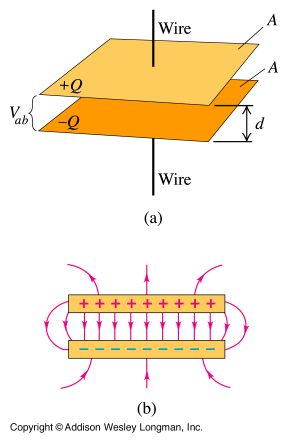 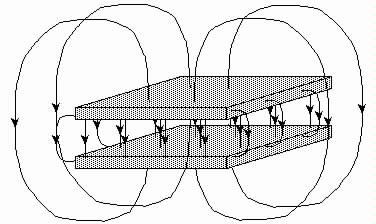 When it comes back out, the x-component of the field will be against the velocity of the particle, slowing it down back to the initial speed. For example, for a positively charged particle, the trajectory is as follows: 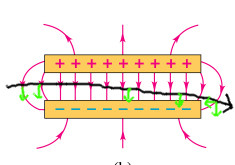 The green indicates the force on the particle at various points. Once the particle exits, it is "pulled back". The net effect is that the speed stays the same but the direction does not. Perfectly in accordance with conservation of energy.

Ignoring fringe fields can lead to some interesting apparent paradoxi, like the origin of the force that pulls a dipole slab into a capacitor.

In particular, if the potential field goes to 0 at infinity in every direction, a particle starting at infinity with speed $v$ ($v = $ magnitude of the velocity) that eventually escapes to infinity must end up with the same speed (assuming no collisions en route, as assumed by the problem).

Not the answer you're looking for? Browse other questions tagged electricity energy-conservation or ask your own question.

2
How dangerous is a parallel plate capacitor which is used in physics demo experiments?
0
Parallel plate capacitor
2
How do electrons distribute themselves along a wire attached to one pole of a battery?
4
Why does not a battery kept in empty space discharge on its own? If space between the terminals is empty, what prevents the electrons to flow?
1
Velocity of an Electron as it Passes through a Uniformly Charged Ring
1
Movement of charges in presence of electric potential difference
1
Why is work done against the electric field to move charges to charge a capacitor?
0
Confusion with electric field in a capacitor circuit