How is the $\frac{1}{r^2}$ dependence of the electric field intensity due to a stationary point charge consistent with the concept of field lines?

Notice that, if you draw "equally spaced" electric field lines all coming from a single point, they must spread out equally in all directions. But the surface area of the sphere around the origin point is $4\pi r^2$, so the density of the field lines at some distance $r$ from the charge, which is their constant number divided by the surface area of the sphere of radius $r$, goes as $1/r^2$, as predicted.

I've solved the problem using the concept of solid angle. 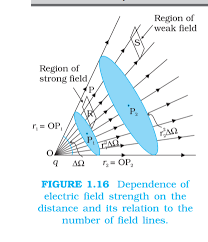 33
Why does the density of electric field lines make sense, if there is a field line through every point?