Why is the graph for the flux density of a copper ring, when a magnet falls through, not linear? 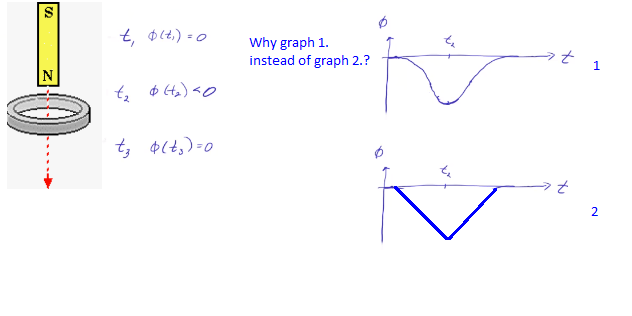 In an experiment where a magnet is falling through a wire, the flux density is presented by the top graph in the image. Why is the graph not a straight line like the one below it?

I thought that if flux density is the product of area, magnetic field strength, and cosine of the angle between them, then $\cos(x)$ is either $1$ or $-1$. Thereby we don't have a cosine-function.

We simply have, Magnetic flux density = field strength * area. Shouldn't that be a straight line, or am I missing something crucial?

(The flux density has an upwards direction as positive).

First of all, the magnetic flux density is the strength of the magentic field itself. It is $B$.

Here, $A$ is the area of the region under consideration.

The last of all, the flux versus time curve has such a curve because, $B$ has an inverse cubic law form (since it is a dipole). This means the field lines are curved and not straight lines.

The magnetic field of said magnet would not be linear, and would extend beyond the north and south boundaries, so before the magnet even reaches the ring, its field is going to create a flux through the wire, hence the gradual tapered ends and non linear nature of "graph 1." The second graph would assume that the magnetic field does not extend beyond the north and south boundaries of the magnet, which would be incorrect. Also, as you can see in the image of the magnetic field lines, the angle between the direction of the magnetic field and the plane representing the ring area, is going to be constantly changing as the magnet falls through, so the cosine term is still important and not "either 1 or -1" as you suggested, hence the non-linear representation in "graph 1."