How does Destructive Interference redistribute energy?

I have tried looking at the many other questions on a similar topic, however, they don't provide a definitive answer to my question.

What I managed to gather so far, is that if a light wave is super imposed onto another (both traveling in the same direction), that their electric fields overlap in opposite directions:

However, this stops making sense when the wave hits a detector like in the double slit experiment. In a region of destructive interference, these waves (with their energy inside their fields) must put their energy somewhere right? How can the energy just magically teleport to the region of constructive interference? What happens to the energy in these destructively interfering waves when it hits something?

There is no magical teleporting of energy.

If there are two waves each of amplitude $A$ the intensity due to the two sets of waves is proportional to $A^2+A^2=2A^2$.

When these waves overlap depending on their relative phase at a point of overlap the amplitude of resulting oscillation will range from $A-A=0$ to $A+A=2A$ which corresponds to the intensities ranging in proportion to $0$ to $(2A)^2=4A^2$ with the average intensity over the region of overlap being proportional to $2A^2$.

So no energy is lost rather in the region of overlap of the two waves the direction of the flow of energy changes and so your region with no light on the screen is compensated for by extra light arriving on the screen in another place.

Update as a result of a comment from @JohnHon

Here is a diagram which illustrates what happens when two sets of waves from sources $S_1$ and $S_2$ overlap.

The blue lines represent crests and between them there are troughs. 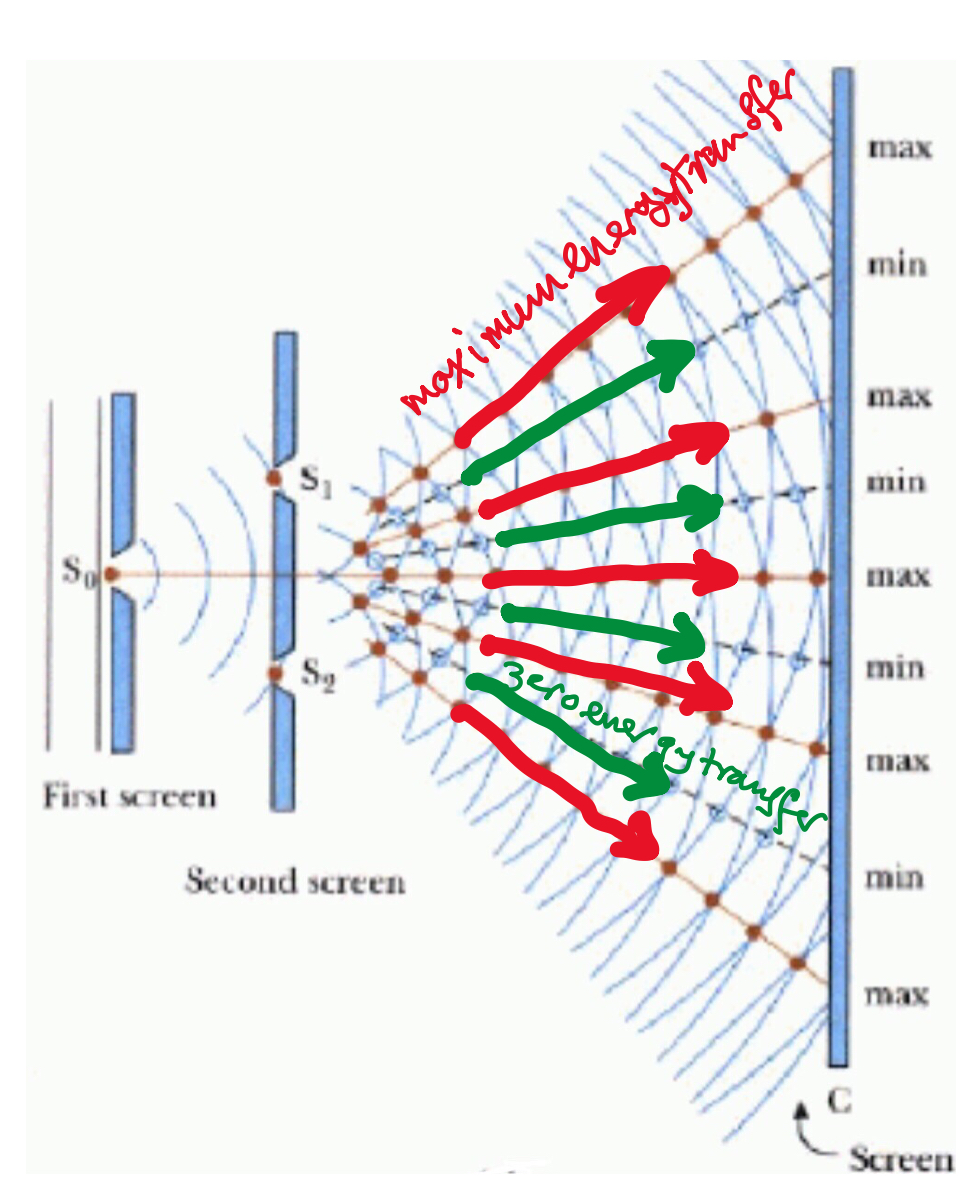 This is a picture taken at one instant of time. A little later in time the troughs and crests would have moved away from the two sources but the lines of zero and maximum energy transfer would not have changed as shown in the gif below.

When one goes to the double slit one electron at a time one is dealing with quantum mechanical wavefunctions, whose $Ψ^*Ψ$ gives the probability of the electron,

to appear at the (x,y) of the screen, and the probability builds up over the accumulation of the single electrons. In this case it is the electrons that carry the energy and momentum that finally build up the interference pattern. More electrons where high probability of interference, less for low.

The same is true for single photons at the time, which is a way to get an intuition of how the classical emerges from the underlying quantum level. This video is also very interesting on how interference appears in coherent beams .

Not the answer you're looking for? Browse other questions tagged visible-light waves electromagnetic-radiation energy-conservation interference or ask your own question.