Paths of least action and loops in time

one is presented with this picture. 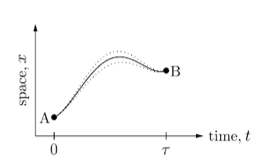 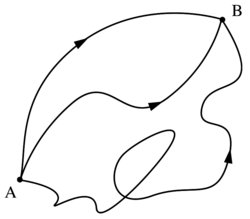 The 2nd picture that you show shows a loop. But this is not because the particle in the 2nd picture does travel back in time, but instead because your second picture shows the complete trajectory of the particle in space, which (in your example) is either 2 or 3 dimensional. While doing so, it doen't say anything about about the time. There is no time axxis in your 2nd picture.

Long story short: There is no contradiction between the 2 pictures you show, they just show different things. Feynmans Path Integral sums over all classical trajectories. But none of this trajectories include trajectories where particles travell backwards in time.

Not the answer you're looking for? Browse other questions tagged lagrangian-formalism time path-integral variational-principle causality or ask your own question.

10
How is the path integral for light explained, or how does it arise?
10
More general invariance of the action functional
5
Least Action Principle (Classical and Quantum Theory)
17
When/why does the principle of least action plus boundary conditions not uniquely specify a path?
12
In Feynman's path integral formulation, what do faster-than-light paths mean?
5
In QFT, does the “sum over paths” of the Feynman formulation requires that all the possible world-lines share the same proper time?
8
Energy quantization in the path integral and the Fourier spectrum of the action
0
Least action in differential steps