I had the following thought experiment recently: Suppose we have a vibrating plate for which we can tune the amplitude and frequency of vibration, and imagine we hold a finger against the plate. For sufficiently high frequencies (presumably where it becomes impossible to perceive the phase of the vibration by touch), it seems that the vibration would be indistinguishable from heat.

This seems to me to be more appropriate to physics SE than biology SE, but feel free to migrate if that's not the case.

This question, from a(n inanimate) physics viewpoint, seems closely related to asking whether increasing the speed of an object necessarily increases its temperature (under the reasoning that high temperatures generally involve faster molecular motion). It does not.

Thermal energy is characterized by random motion. In contrast, the vibrational motion you're describing is collective; it's a low-entropy phenomenon because it can be described by specifying a single mode and frequency, unlike the immense amount of position and velocity data that would be needed to describe the molecular motion occurring within a hot object.

It is, however, true that in any material (including the vibrating plate and your skin), vibrations are damped through internal friction. Fundamentally, this is a manifestation of material inelasticity, which is generally small for small deformations but never entirely absent. The resulting damping ultimately entirely converts vibration into thermal energy, which doesn't imply that these mechanisms are equivalent but only that one is converted into the other.

Let's now take a biological perspective. You've written "...it seems that the vibration would be indistinguishable from heat" and "The coupling of the motion of the plate to your skin will result in full spectrum of frequencies, which I strongly suspect would trigger your sense of heat in the same way as a genuinely random stimulus." Actually, vibration can induce feelings of cold, warmth, and/or pain depending on the conditions. There are multiple reports of reported skin sensations experimentally obtained from ultrasonic vibration applied to the skin; shown below is a typical configuration using 350 kHz or 650 kHz input (the upper bound of input frequency and amplitude is set by the emergence of frictional heating, as described earlier): 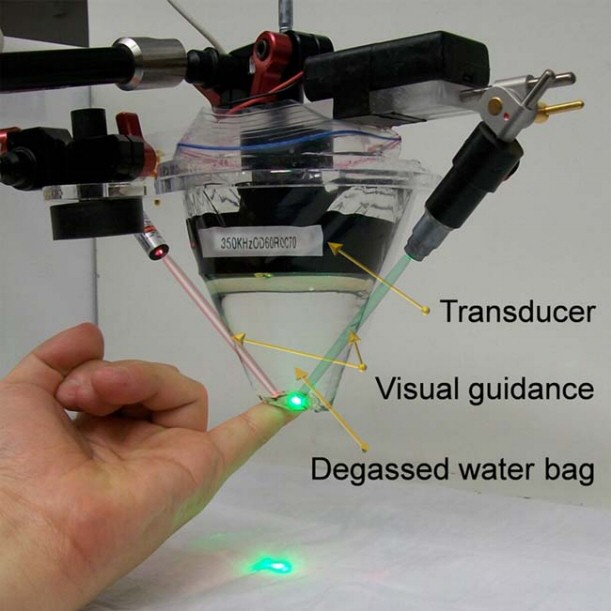 Here are reported (subjective) results from that paper for the highest frequency measured, 650 kHz:

Although the temperature of the water and finger stayed constant as measured by objective thermometry, when the subjects were in a 20°C environment, the self-reported sensation was that of cold (C); at 40°C, warmth (W) (see blue and yellow shading, respectively; in addition, "T" denotes vibration and "N" pain). These temperatures roughly correspond to the range of operation for the corresponding thermoreceptor, indicating that if you vibrate any thermoreceptor at the appropriate settings, you'll sense its corresponding output. Of course, that again doesn't mean that such vibrations are somehow equivalent to warmth any more than they're equivalent to cold. The authors compared the temperature sensations to those experienced when contacting menthol, for example, which has a cooling sensation even at room temperature because of receptor activation.

L. R. Gavrilov, a pioneer in characterizing human responses to focused ultrasonic exposure, reported that "By changing the intensity ard durations of the stimuli and also the location of the focal region, all sensations that humans can perceive through their skin, i.e., tactile, temperature (warmth and cold), different pain sensations and so forth, were induced." (Gavrilov et al., "Application of focused ultrasound for the stimulation of neural structures," Ultrasound Med Biol 1996; 22(2):179-92.) Gavrilov emphasizes that these are subjective sensations obtained with minimal actual induced temperature changes, further noting that "[w]ith some stimulus parameters (for instance, with a frequency of 2.67 MHz and duration of 100 msec) threshold sensations are accompanied by a significant increase (up to 10-15°C) in tissue temperature in the focal region, and this can doubtlessly produce temperature sensations." (Gavrilov et al., "The effect of focused ultrasound on the skin and deep nerve structures of man and animal," Progress in Brain Research vol. 43. Elsevier, 1976. 279-292).

In summary, large-amplitude and high-frequency vibrations can produce a temperature increase in materials due to internal damping and can produce sensations of cold or warmth (or pain) depending on the conditions (Gavrilov's reviews are a good starting point for understanding these results). However, I wouldn't say that a high-frequency vibration is equivalent to thermal energy (and for clarity, I'd avoid the use of heat as a noun).

Not the answer you're looking for? Browse other questions tagged thermodynamics temperature vibrations perception or ask your own question.