How much of the universe is observable at visible wavelengths?

And so on through Galaxy Clusters, Superstructures, etc...

What percentage of our universe can we not see at visible wavelengths?

Surprisingly, it makes no sense to make calculations with the angle subtended by objects. They don't simply "block out" the light of foreground objects. The Universe is more subtle than that and, when you spot a galaxy, in most cases you can be pretty sure that there isn't anything behind it, at least anything that you would be able to see if the galaxy were removed.

Moreover, the fact that two objects lie along the same line of sight is a happy coincidence, that helps seeing the most distant one, due to gravitational lensing amplification. Usually the background object would be too faint to be detected otherwise. Whole Ph.D. thesis are written every year due to this extraordinary coincidences. See this beautiful image, called the Horseshoe lens, where the image of a distant blue galaxy, that lies far behind a red foreground elliptical, not only is not blocked out, but is even amplified: 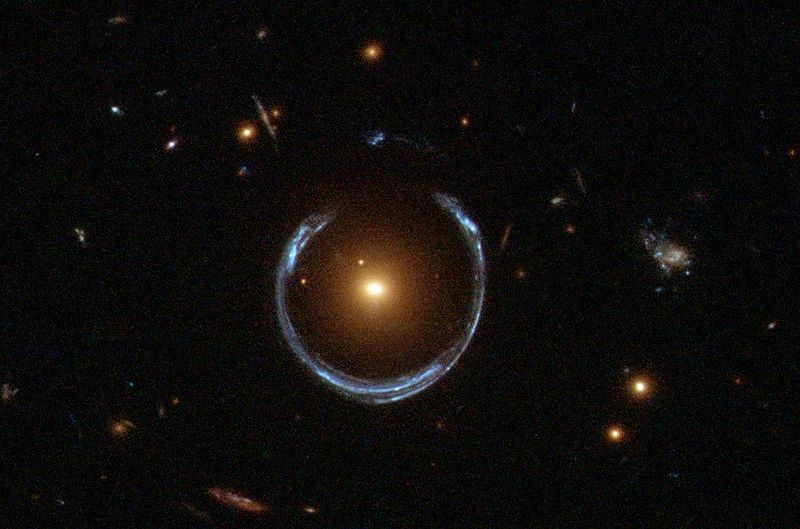 This effect happens too with individual stars, and nowadays telescopes are not able yet to resolve the images in that case, but we can still detect an increase in brightness (that is how a lot of extrasolar planents are being detected). See http://en.wikipedia.org/wiki/Microlensing .In addition to that, typical transverse speeds of stars make unrealistic that a star can hide another fainter one for much time...

Another fact is that, for nearly all practical purposes, galaxies are transparent. In the worst scenario you can think of, at least the different redshifts in the lines would allow to distinguish between two overimposed images. A famous example is the galaxy ngc7603. Two foreground objects with redshifts ~0.2 and ~0.4 are seen through the galaxy itself at redshift ~0.03: 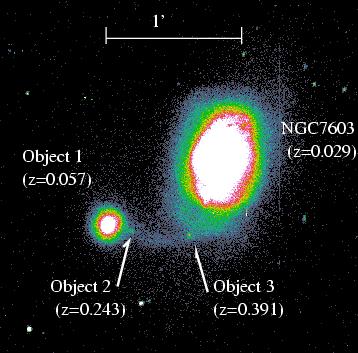 Another famous example is Q2237+030 (known as "Huchra Lens" or "Einstein Cross"), a background quasar that is seen through the very center of a galaxy. As an additional effect, we see four images of the background quasar, thanks to the bulk mass of the foreground galaxy acting as a lens:

And, finally the image of a star is not a tiny circle, but a diffuse spot, in the ideal case with faint rings (the so called Airy diffraction pattern, impossible to avoid even for the HST) but usually blurred by the atmosphere and spatially extended thorough the CCD plane. That is why it is so difficult to spot Pluto's moon. Not because the angle the objects subtend, but rather due to technical optical limitations (and atmospheric blurring). In some cases, sophisticated deconvolution algorithms have allowed to see additional objects that were embedded in the blurry image of the star. That is how three planets could be seen around HR8977, a star 140 light-years away: 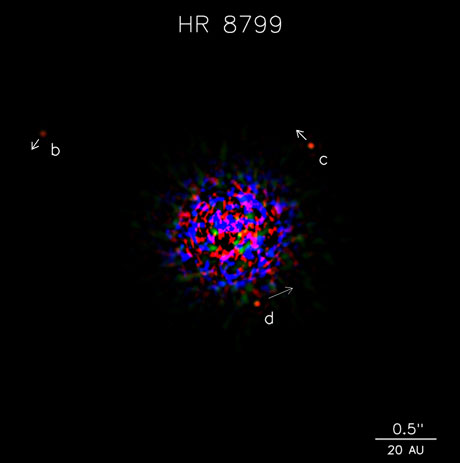 The zone of avoidance is only an annoyance if you want to have data from a particular object in a particular wavelength interval, but it is not important for our understanding of the Universe, since at large scales the Universe is homogeneous and isotropic. Consider too that, if we don't restrict to the tiny portion of the spectrum called visible light, the zone of avoidance is not as bad as it seems. I am still amazed by this infrared movie of stars orbiting the central black hole in our galaxy, that was made looking directly through the avoidance zone:

A big progress is being made too in gamma and x-rays detectors. It is not completely unrealistic to think that, in the future, there might be neutrino telescopes that achieve the same resolution of today optical instruments (radio astronomy with optical resolution was too a fantasy at the beginning). That would unveil new regions, for instance it would allow us to look directly at the center of the Sun...

Have a look at the Hubble Deep Field image.

I downloaded the 1024x1024 version of this and the Photoshop histogram reports that about 95% of the image is dark. From this (somewhat cavalier) measurement I deduce that about 5% of the sky is blocked out by galaxies up to 13 billion years old. I'm not sure what difference going back even further in time would make, though presumably if you go back far enough the surface of last scattering would block out 100% of the field.

Note that the deep field deliberately chose a direction in which there were few stars, however only the bigger closer stars show a visible disk through Hubble, so I'd guess that the stars make little difference. Dust clouds will make far more of a difference, but you've already accounted for that by taking the Milky Way into account.

How about the picture in http://www.eso.org/public/images/eso1243c/ (there's nothing special about this - I just Googled for "wide field view of sky")? The Adobe histogram trick reports around 95% of the image is dark, though the cutoff isn't that sharp so it could be as little as 90%.

This image won't show faint galaxies, but on the other hand the limited resolution makes the stars look bigger than they should be (i.e. they cover more pixels). I'm not sure how you'd come up with a definitive answer since it depends on the resolution and sensitivity of your telescope. Still, I'd guess somewhere around 5% is not a bad estimate.

Actually this is quite interesting in a Friday afternoon sort of way. Consider this:

The Milky way contains 100 billion stars and is about 100,000 light years across. The Sun is about 8.3 light minutes away. Suppose the average star is the same size as the Sun (probably an overestimate), and the average distance from the Sun to other stars is 25,000 light years (the distance to the centre of the galaxy), then the average star appears about 1.5 billion times smaller then the Sun. So altogether the 100 billion stars cover about 65 times as much sky as the Sun covers. The Sun subtends about half a degree, which is about 0.0005% of the sky, so all the stars in the Milky way cover about 0.03% of the sky. That backs up my claim that the area covered by the stars can be ignored.

Suppose that we had a Super Hubble Space Telescope available. An optical telescope with diffraction-limited optics and enough aperture to image individual stars in distant galaxies. What fraction of the sky would be observed to be dark?

It would certainly be more than 99%. If, hypothetically, 0% of the sky would be dark, all objects would on average heat up to about 3,000 K (estimate for the average temperature of thermal radiation from stars, taking into account average redshifts according to the so-called cosmic time–redshift relation). Given that dwarf planet Eris reaches a surface temperature of 30 K, it must be that less than 1% of the lines of sight from Eris hit a star.

This is of course a loose upper bound, as Eris is very close to the star called Sun. In other words, the temperature of 30 K is almost entirely due to the relatively large portion of the Eridian sky being covered by the sun.

If you go to the Wikipedia page dedicated to Olbers' paradox, you can read similar reasoning leading to the conclusion:

8
Could many widely separated space telescopes be combined for VLBI on IR/visible wavelengths?
8
How do we estimate $10^{23}$ stars in the observable universe?
9
In a random direction, am I more likely to find a dwarf or giant galaxy?
3
Did dark matter cause the formation of the Solar System?
2
Resource: Star map which show current actual positions versus current observable positions?
1
Total positive energy in the (observable) universe
0
Is last scattering surface synonymous to the size of the observable universe?