Can a deformable object “swim” in curved space-time? [duplicate]

It is well known that a deformable object can perform a finite rotation in space by performing deformations - without violating the law of conservation of angular momentum since the moment of inertia can be changed by the deformations of the object, see e.g. this Phys.SE question.

It is also well known that in flat space-time, it is not possible for a deformable object to displace it's center of gravity by performing deformations, see e.g. this Phys.SE question.

However in curved space-time can a deformable object swim through space by performing deformations?

Yes, you can swim through space, but only if space is curved - in the vicinity of a gravitating body (which creates curvature of space-time) it is possible for an isolated body to move by only executing internal motions of parts of the body. The reason this is possible is that the center of gravity of an object is not well defined in a curved space-time. Therefore a set of deformations of the object can result in a net displacement of the not well defined center of mass

A deformable object with no angular momentum can perform a rotation without violating the law of conservation of angular momentum. A simple way of imagining this is to think of 4 weights (red) on 2 tracks (black) that are connected by a motor (green) that can rotate the two rods around their centers of mass as seen as this picture: 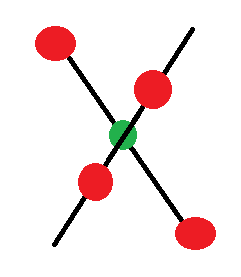 Starting with this object stationary in space and with no angular momentum, move two weights closer to the pivot point. Then rotate the rods with the green motor - the rod with the weight far apart will rotate through a smaller angle than the weights that are closer together since the moment of inertia of the two rods are different. Then reverse the positions of the weights on the two rods and reverse the angle of rotation of the green motor. When you finish this maneuver there will be an overall change of the angle of the object in space. However at the end of the maneuver the center of mass of the object will be in the same position and the total angular momentum will still be zero - thus the angular momentum is still conserved. You can actually do this yourself using your arms and legs and a swiveling desk chair.

In "ordinary" curved space-time, such as the curvature caused by the Earth, the effects are very small, but they are non-zero. For example for a meter sized object performing meter sized movement sequences in the vicinity of the Earth, the distance the center of mass would move is only $10^{-34}$ meters for each sequence of moves (this distance is only about 6 Planck lengths!).

A blog that gives a very readable and perhaps understandable description of the effect is here: http://www.science20.com/hammock_physicist/swimming_through_empty_space

...[the] key to this swimming in empty space is the fact that the concept of center-of-mass is ill-defined in non-Euclidean space. Non-Euclidean space swimming is geometric in nature and entirely determined by the sequence of shapes assumed. In several ways this swimming is similar to the mechanism by which a cat falling upside-down rotates itself during free fall. Physicists refer to geometric phases to describe these effects...

And gives a 2 dimensional example of swimming:

Imagine a two-dimensional three-legged creature moving frictionlessly over the surface of a sphere.

Let's say this creature is positioned at the equator with one leg pointing east and two legs pointing along the lines of longitude towards the north and south poles. The swim stroke consists of four moves. First the tripodal creature extends its two longitudinal legs, and subsequently it extends the eastern leg. To complete the stroke, it retracts the longitudinal legs and finaly retracts the eastern leg. As a result of each such 'swimstroke' the creature moves a wee bit westward.

The reverse is true for the backreaction to the eastern leg retracting. As a result, the westward movement of the base of the longitudinal legs along the equator is larger than its eastward movement. 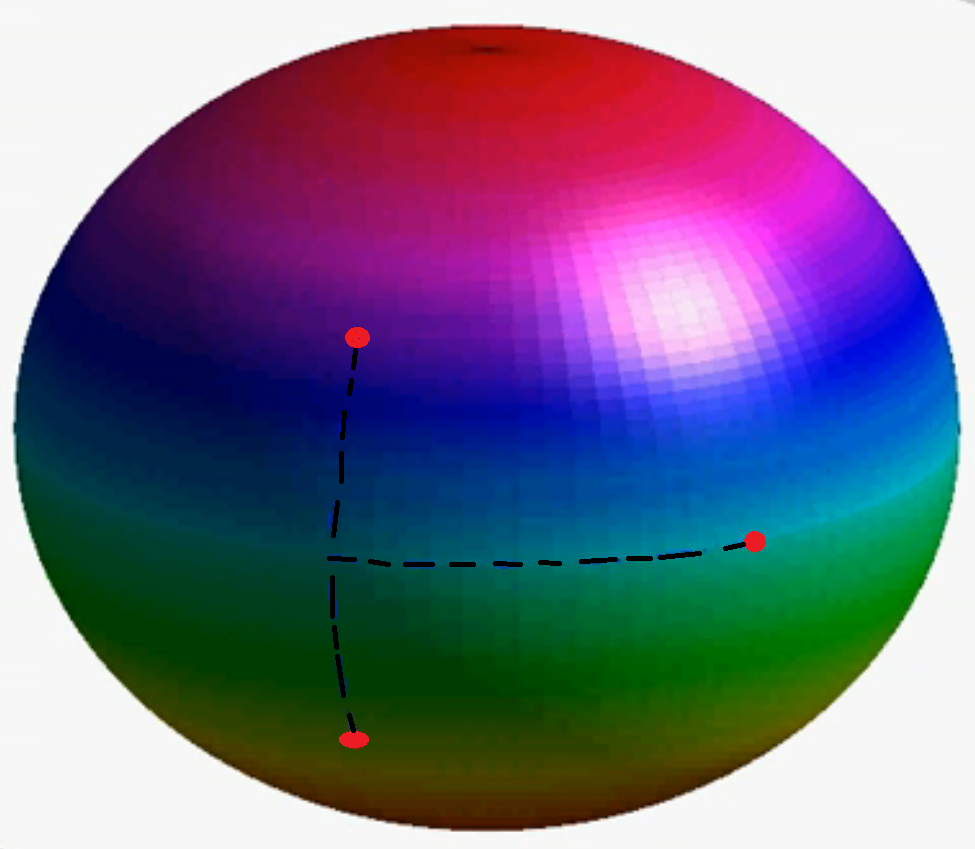 Not the answer you're looking for? Browse other questions tagged general-relativity classical-mechanics conservation-laws or ask your own question.

34
Swimming in Spacetime - apparent conserved quantity violation
84
Could a “living planet” alter its own trajectory only by changing its shape?
0
force required to remove earth from its orbit?
5
Is it possible to rotate an angle on perfectly smooth ice?
3
Displacement with zero velocity
0
Can acceleration be achieved without reaction mass?
0
Can thrust occur with constant mass?

34
Swimming in Spacetime - apparent conserved quantity violation
30
Is String Theory formulated in flat or curved spacetime?
2
Space-time Topologies?
5
Curved space-time VS change of coordinates in Minkowski space
10
What is the experimental evidence that suggests space-time is curved?