Why can't one see tidal effects in a glass of water?

Why can't one see the tidal effect in a glass of water like in an ocean?

A very sensitive device would be required to measure the minuscule change in the water depth along the glass walls, because the differences in the strength of the gravitational field between each side of the glass are essentially zero. Because of this the force exerted on the glass is the same, but due to the small volume of water in a glass as opposed to an ocean it would be very hard to measure any change. However, the difference in the strength of the gravitational field between the side of the Earth closest to the Moon and furthest to the Moon is enough to pull water more towards the side close to the Moon.

It's also worth nothing that the surface tension, at these small sizes, will have a much more significant effect than tidal forces, further hindering the measurements.

If you had two glasses of water, connected by a tube, sufficiently far apart, you would see a tide, because the force of gravity due to the moon would be different at the two locations: 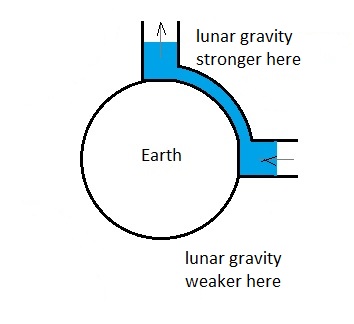 You might be thinking the water is simply pulled up from its container when the Moon is nearby. If that were the case, then sure, the tides in your glass would be just as strong as those in the ocean. But of course, that's not the case. One thing that should make you suspicious is the fact that the Moon shouldn't preferentially pull water any more than the solid sitting next to it. Gravity is an equal-opportunity accelerator, heedless of the fluidity of the substance.

To see why there are tides at all, first consider the Earth without water. As the Moon goes around (or better yet, as the Earth spins on its axis, since this happens a couple dozen times for every one slow orbit the Moon makes), the strong gravity actually deforms the entire planet ever so slightly. It gets elongated, with its long axis pointing toward the Moon. As others have pointed out, this has to do with the different strength gravity has on the Moon-side of the Earth versus the opposite side. However, there is more to the story, since the material properties of rock versus water also come into play...

Now add oceans. Water can flow more easily than rock, and so the oceans experience this elongation even more than the Earth. As a result, water piles up on the near and far sides of the planet. (Note: This analysis predicts there will be two tides per day, as in fact there are, but many incomplete explanations only give you one per day.)

For an analogy, think of the Earth as a piece of partially baked clay being stretched by someone desperate to reshape it. Now consider that same person applying the same stretching force to a piece of soft, unbaked clay. The latter will stretch more. Overlay the two scenarios, and you see both components deforming in the same way, but the wet one overtakes the solid one.

Ultimately, the only way a tide could appear in the glass of water is for both the water and the glass to extend so far that different parts of them feel different gravitational effects from the Moon, causing them to deform their shape.

The gravitational pull of the moon on the oceans or on a glass of water is the same assuming a specific location. Because of this the force exerted on the glass is the same, but due to the small volume of water in a glass as opposed to an ocean it would be very hard to measure any change. Because of this a very sensitive device would be required to measure the minuscule change in the water depth along the glass walls.

Not the answer you're looking for? Browse other questions tagged newtonian-mechanics fluid-dynamics newtonian-gravity solar-system tidal-effect or ask your own question.

6
Determining Average Tidal Effects
26
How can the Moon have such a strong effect on the ocean?
3
What are the tidal effects of Io on Jupiter?
1
Accelerating a glass of a water across a table?
48
Why do some location on Earth have only one tidal maximum per day instead of two?
3
Why does air get trapped below water pouring into a glass?
37
Why do tidal waves appear so suddenly in some rivers?
0
Why isn't the capillary tube displaced downward by the column of water?
31
Does bottle water rise a little bit on full moon days?