Why do atoms emit a certain colour of light? (The emission spectra)

We were taught about the emission spectra in class last year, but my teachers couldn't give me an answer to 'what determines the colour of light emitted?'. (they were giving me the answers to the worksheet, but not my question if this makes sense). This annoyed me. So now I am here.

From what I have read so far, (and this is only my guess) when the electron jumps to the next energy level in a Hydrogen atom, it emits red light. (I am just gonna explain why I think this happens. Feel free to criticise it however you like.) Because Hydrogen is a small atom, the electron doesn't need a lot of energy to jump to the next level. So because red light is the least energetic visible light, it is emitted. So then would (let's just say) fluorine emit a higher energy wavelength because it is more 'effort' for the electron to jump?

I just looked at the wavelength for certain elements. And apparently, potassium emits a pink/purple colour. But copper emits a light green. So obviously, my guess is incorrect, as copper is more massive than potassium.

I would really appreciate it if someone could answer this. And if you could, may you try and explain it a simple as possible? I sorta only got into Quantum Mechanics early last year, so I'm not familiar with all of the terms. But I am happy to put in extra research if you need to use other theories to explain this thoroughly.

Thank you so much for answering this question, guys! Even though I still have a long way to go, I now know what direction to head in to get a further understanding.

You seem to be under the impression that each atom emits light of a single colour, but this is not the case. Generally speaking, every atom will be able to emit light over a broad array of discrete wavelengths, which include a bunch of limit points where you have an infinity of different spectral lines congregating at a limit until they cannot be resolved.

As an example, this is what the spectrum for hydrogen looks like, which is broken up into a number of different spectral series:

Generally speaking, the emission spectra of most atoms cover roughly similar wavelength ranges, basically spreading over the visible range with substantial bleed over into the UV and infrared regions. As such, it is not the case that there is some simple order between the lines of the different atoms, and you cannot rank atoms in terms of "effort" for jumps or in terms or size or weight, since they all produce interlaced forests of lines, with characteristic signature but with no real relationship to each other: 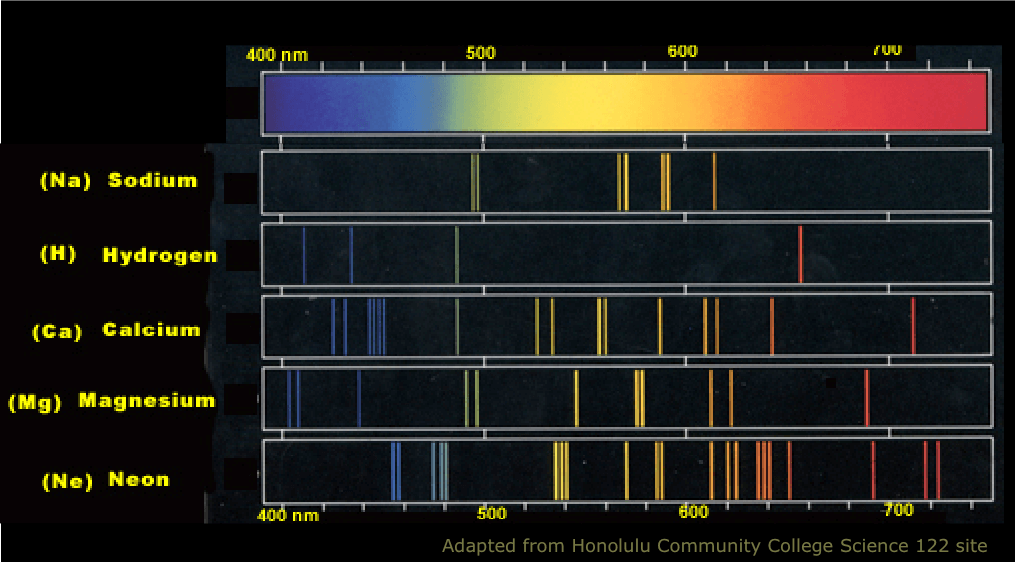 This means that your core question,

what determines the colour of light emitted?

doesn't make sense as posed. But you can still ask a very similar question, by inserting an appropriate plural:

what determines the colours of light emitted?

And here, I'm afraid, the only answer is "it's complicated". The line emission and absorption spectra of atoms can indeed be calculated from first principles, but (with the sole exception of hydrogen) this cannot be done analytically, and it requires some substantial number-crunching to figure out. (Basically, it requires you to discretize a certain differential operator into a big matrix, and then to diagonalize that matrix.)

Atomic line emission and absorption spectra come from the differences between the discrete energy levels in the atom, and those are the solutions of a complex dynamical problem in quantum mechanics, involving all of the interactions between the electrons and the nucleus as well as each other. Typically, calculating the emission spectrum of hydrogen is within the reach of a 'mature' course in quantum theory in an undergraduate degree (often the second QM course within the degree), but the tools for even an approximate calculation of atomic spectra for multi-electronic atoms require a further, dedicated course on atomic physics.

Your guess of "electrons jumping between energy levels" is definitely on the right track (in fact, it's basically the answer to your question!).

Electrons fly around the nucleus in something called orbitals (these are not exactly the same thing as orbits, but for the sake of this explanation the difference doesn't really matter). Any given orbital has a specific energy associated with it (see note below). The crucial point is: while every atom/molecule has an infinite number of orbitals, their energies are not continuous. For example, in the case of hydrogen, the ground state orbital has an energy of -13.6 eV, while the first excited state has an energy of -3.4 eV (quick notes: (i) the energies are negative because they're binding energies; and (ii) I'm disregarding relativistic and other 'fine-structure' effects here).

Now, under normal conditions, an electron spontaneously tries to minimize its energy, and it does so by jumping to an orbital with a lower energy. In the case of hydrogen, if an electron jumps from the first excited state to the ground state, its energy decreases by $\Delta E$ = 10.2 eV. However, that energy cannot just vanish (conservation of energy, right?), so instead it is used to create a photon of frequency $\nu = \Delta E/h$, as dictated by Planck's formula. If you make the calculation, you'll see that such a photon has a wavelength of roughly 122nm - deep into the UV region of the spectrum. Of course, this is just an example of a possible transition: we could equally have considered a jump from the second excited state to the ground state, or from the third excited state to the first excited state. In many cases, these other transitions occur in the visible part of the spectrum.

For other atoms, the principle is the same: electrons jump between orbitals and, in doing so, change their energy while emitting a photon with a frequency/wavelength corresponding to the difference.

Here's where it gets beautiful: the energies of the orbitals vary from atom to atom, and so the photons coming from different atoms have different frequencies/wavelengths. In fact, each atom has a series of spectral lines associated with it (each spectral line coming from a different transition between a couple of orbitals), and these are so unique that they are often thought of as a "fingerprint" of the atom.

Note on orbital energies: the precise value for the energy of an orbital depends on a number of different factors, and to calculate them you need the full "machinery" of quantum mechanics.

It is not true that hydrogen would only emit red light. There are many different wavelengths at which hydrogen can emit light - even ultraviolet which is more energetic radiations than blue light. The electrons need not be at $n=1$ for hydrogen all the time. It could be in another energy level. You must have studied about the Lyman, Balmer, Paschen series. The radiation comes when those transitions occur between a higher energy level to a lower energy level. So, the electrons does not have to do any "effort". If you were doing this as an experiment, you would have heated the hydrogen gas first and recorded its line spectra. By heating, you provide the electrons with energy that gets them to elevate from $n=1$ to a higher state and then force them to release that energy because $n=1$ is more stable.

And to emit visible light, as you might remember, all electrons have to make a transition to $n=2$ before going for $n=1$ and so exactly where the electron in discussing gets excited will give the answer to what color it emits. That is, the electron can get energy for it to get elevated to $n=3,4,5,6$ or wherever. Of course, that energy it obtains should depend on the heating given to the gas in the first place.

Orbitals describe the possible places around the atom where an electron can be (and different ones have both different shapes and different energies). To understand this you need a fair dose of quantum mechanics. But the only part that is really relevant here is that those different orbitals have lots of different possible energies.

Now the complicated bit. Because there are a lot of possible orbitals those electrons (or that single electron in the case of a hydrogen atom, other atoms usually have more than one electron), there are a lot of possible transitions that can happen. To simplify a little, we can number the different energy levels with n=1 being the lowest in energy. But excited hydrogen atoms can (crudely) show emissions from any higher level to any lower level. Transitions to a given level form a series of possible colours/energies (see wikipedia's list). Transitions to the lowest energy level are called the Lyman series (all are in the hard UV and can't be seen by the eye) and transitions ending at n=2 (the second lowest) are called the Ballmer series (four of these are in the range of visible light). And there are a lot more series corresponding to electrons dropping to energy levels with n>2.

Your simple intuition that the pattern of emission from other atoms would be easily explained is wrong. A lot of emission lines are well outside the visible so the lines you can actually see are not a good indicator for all the emissions that can happen. Even hydrogen with just one electron is complicated. But the key idea is that there are many possible energy levels electrons can occupy and therefore many possible "colours" of emitted light.

Not the answer you're looking for? Browse other questions tagged quantum-mechanics electromagnetic-radiation photons electrons atomic-physics or ask your own question.

6
How can absorption spectra form if atoms can't remain in an excited state?
16
Can an electron jump to a higher energy level if the energy is insufficient or exceeds the $\Delta E$?
0
What determines the color of photon that is emitted from an exited atom?
1
A question on the emission spectrum and absorption spectrum
0
Blueshift due to kinetic energy of electron?
9
Why is the top of the aurora red?
1
Absorption and emission of photons
1
What colour will be an object that reflects some wavelengths while emitting some others?
0
How do the electrons absorb energy in an discharge tube that is used for produce an emission spectrum?