Why is an electric motor more efficient at higher loads?

My question is driven by the plot below. We see that acceptable operating range of a motor is between 50-100% of the rated load. Below 40% or so the efficiency of the motor drops off dramatically.

What is the cause of this phenomenon? 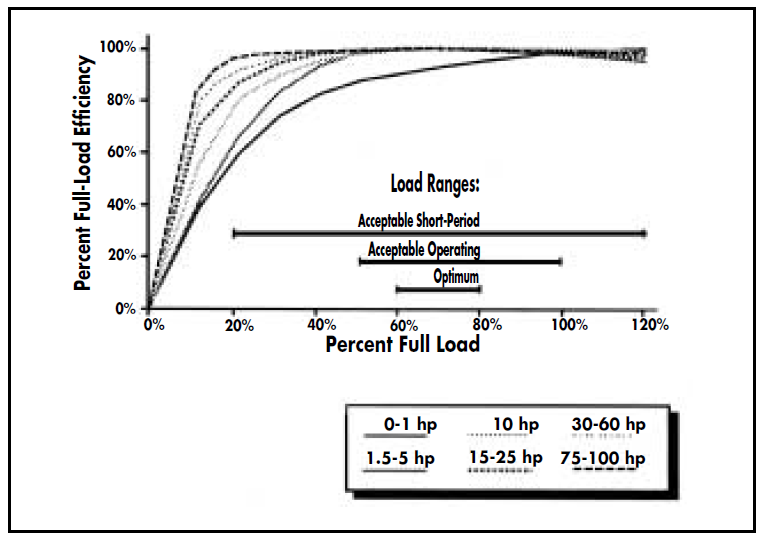 Given that, we can see that efficiency for every motor is going to be 0% at no load (i.e., maximum speed at 0 torque). Efficiency will then increase as torque increases until it reaches a maximum and then it will start to drop off until stall torque is reached. At this point, the efficiency is 0% again because the speed will be zero.

The other way to ask your question is why is efficiency low at low loads? Friction is the main cause of inefficiency at low loads. Losses due to friction are essentially constant with respect to load so at low loads, the majority of your input power may be used to overcome friction. As the load increases, friction plays a smaller and smaller role in the overall efficiency. Granted, other inefficiencies begin to occur at larger loads ($I^2R$ losses, copper losses, stray load losses, etc.) but in a well-designed motor the efficiency will peak in the 80-100% load range.

No matter what a motor must drive its own rotor. Lets say that rotor weighs 1 kilogram. If you were to drive a load that also weighs a kilogram, then 50% of the energy is driving the load and 50% driving the rotor, so it cannot be more than 50% efficient. If you increase to 2 kilograms as a load, then the rotor is now only 33% of the total mass, and so it can be up to 66% efficient.

As you increase the load the rotor becomes a smaller and smaller fraction of the total mass being driven, meaning a greater portion of total electricity spent is actually doing useful work.

The reason is cost driven by Physics. A motor with a larger torque rating requires larger magnetic fields to be generated.

Magnetic fields require either more turns and/or higher current. Higher current requires larger wires. In both cases the motor is heavier. If those magnetic fields are not used to capacity the energy to drive the extra mass is wasted.

So motors are designed to work at specific load range to save cost.

The most common motor, then induction motor has a lot of its losses dependent on slip. Slip is the speed ratio of the motor's rotor compared the the speed of its stator's magnetic field. That means that the slower the rotor turns, the larger the slip, and the closer it approaches the stator's field, the smaller slip is. Losses such as copper loss have an inverse relationship with slip so as slip increases, the losses decrease.

How does a load affect this? Loading the motor induces a torque in the opposite direction slowing down the rotor's speed. Therefore slip increases and losses are minimized.

Not the answer you're looking for? Browse other questions tagged classical-mechanics energy rotational-dynamics or ask your own question.

1
Gears and efficiency/speed
0
DC Motor Torque Constant
1
Why do electricity generators have to work harder for higher loads?
1
How do I calculate motor efficiency from voltage, current and RPM?
0
What is the Proper way to determine overall velocity in a pipe?
1
How does reaction torques affect the angular acceleration of motors?
1
Do calculations require energy?
1
Power of conveyor belt required to accelerate a mass