How can be various frequencies in one place?

How can we receive different radio shows in one place, they are coded in phase or frequency or amplitude of electromagnetic waves, but shouldnt elecreomagnetic waves interact each other, and all electric and magnetic vectors superpose, and in one point or space just have one electromagnetic wave with addition of several EMWs?

"but shouldnt elecreomagnetic waves interact each other, and all electric and magnetic vectors superpose?"

The answer to this is yes AND no. Yes the waves are "superposed" - but no they are not exactly "interacting." The word "interaction" is a tricky word because it means a lot of things in different contexts. In the case of electromagnetic waves, an interaction can often mean a process that is NOT just a linear superposition of the inputs. If you simulate two pulses that run into eachother, unlike balls of matter, which "interact" and bounce off eachother, E-fields (because of the superposition principle) simply pass through each other (and don't "interact").

(If you want a simple example of an interaction, imagine we send two frequences through a medium and the medium's atomic properties are sensitive to one of the frequencies. The properties of the medium might be changed by one of the frequencies, which causes a change in how the second frequency interacts with the medium. This causes an output that is not just the sum of it's individual parts - something we call an "interaction")

Just saying definitions isn't really that helpful, so let's try to look visually to get in intuition for your real question. How we are able to split up these different frequencies when they are superposed on top of eachother:

If I look at the E-field as a function of time for two frequencies, they would look like this separately: 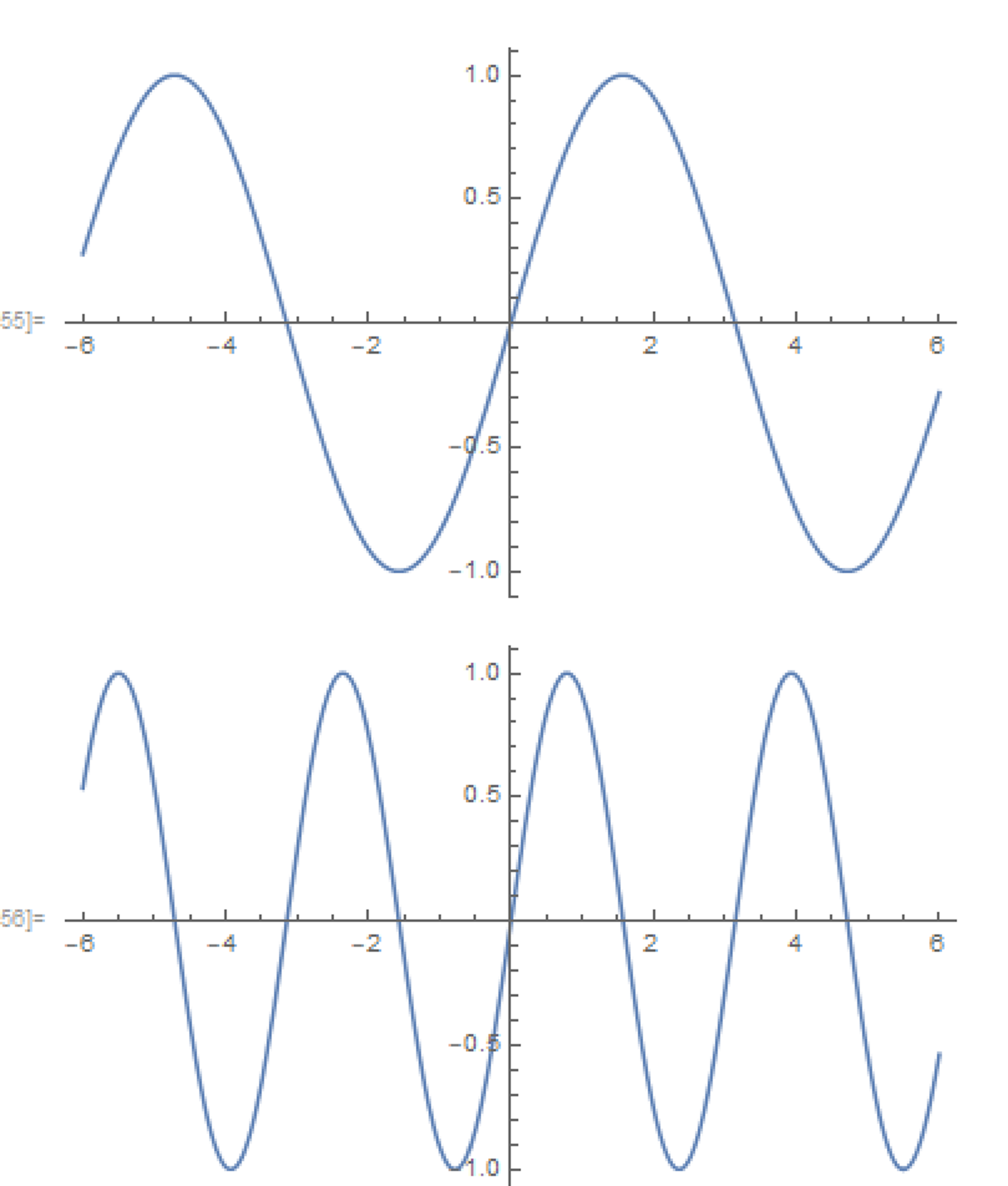 But when I add them together, I will get something a lot "funkier": 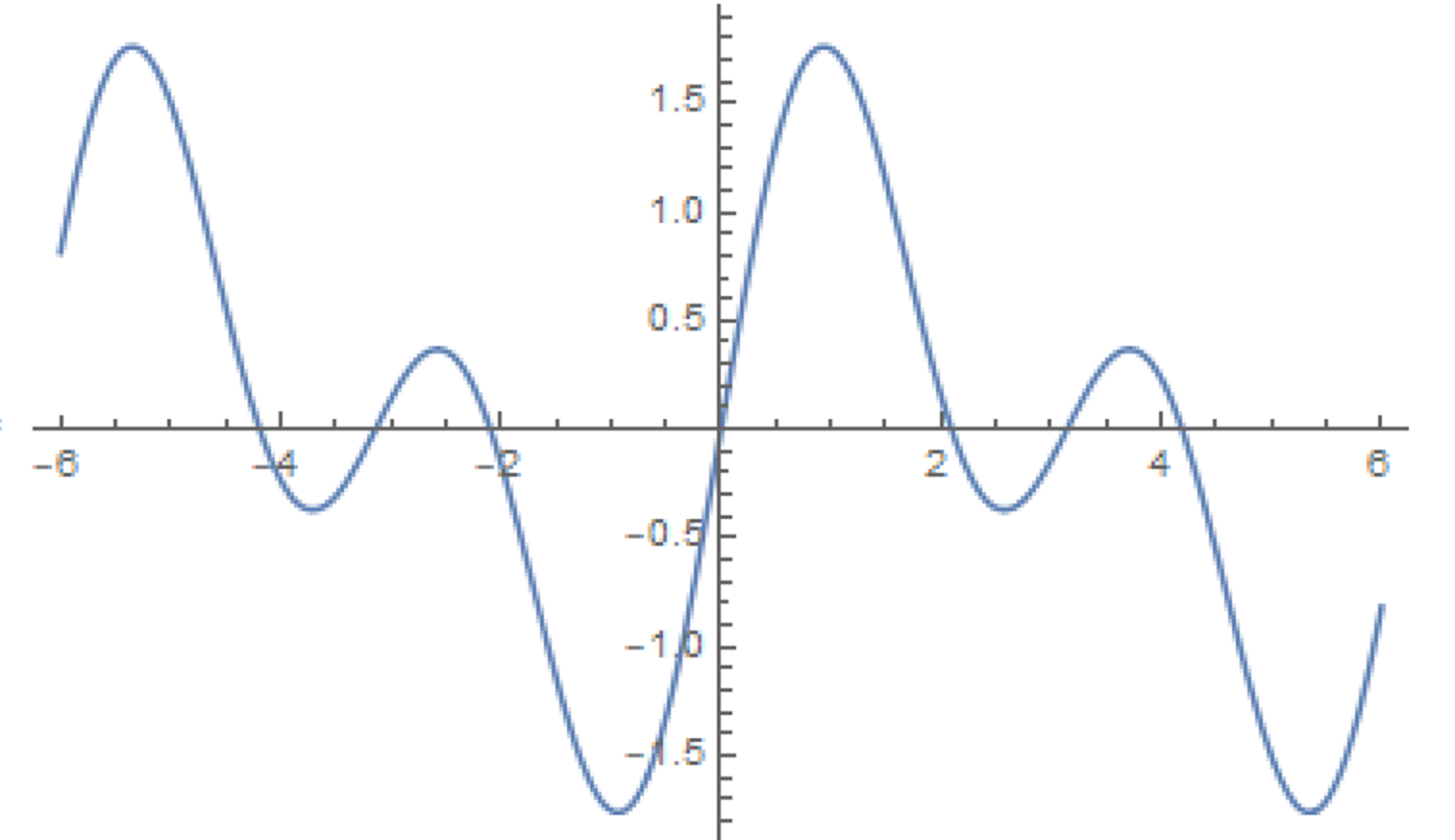 Naturally this will look a lot messier when we add more and more frequencies to the mix. But since this is just a linear sum of different frequencies, if I take this output through an electronic device that finds the fourier-transform of the electrical signal, then I can obtain the fourier transform of this linear combination (which is simply the fourier transform of the individual frequencies). If we plugged this 2-frequency signal into this device (called a spectrum analyzer) - we will obtain a peak for each frequency (and an amplitude for each peak, associated with the strength of each frequency in the signal). This is how we can encode information at multiple frequencies. We can change the amplitude of each individual frequency, and then this will be seen on our fourier-transform devices as moving an individual peak up and down!

Your radio receiver is frequency-selective. This means that frequencies different from the one you have tuned the radio to are rejected, so that any signals you do not wish to hear do not show up in the output.

In general, radio waves of different frequencies pass right through one another and do not interact as they travel through space. Your radio receiver is hence capable of separating out the signal you want from all the others, which will have no influence on the signal you want.

Not the answer you're looking for? Browse other questions tagged electromagnetic-radiation frequency superposition antennas radio or ask your own question.

1
How do EM waves get detached from an antenna?
1
Plane waves - EM wave
0
Can a phase array evoke a standing wave at a focal point that has a much higher frequency that the constituent emitted frequencies?
2
Do Sidebands mean the frequency of an AM radio wave is not constant?
2
Is it possible to synthesize an EMW which is not quantized?
2
Antennas and the electromagnetic field
1
How is information transmitted by radio waves (how radios work)?
0
How do Antennas receive information?
0
Radio wave behaviour in reflection, Refraction and Diffraction