I'm currently trying to read up on the Lorentz-group and it's representations. I've found a couple of posts here on stack-exchange that I find helpful and confusing at the same time, so I would be glad if someone could help me connect the dots. I will be referencing the following two posts: [1] and[2]. From here on I will call $SO(1,3; \mathbb{R})$ the (proper) Lorentz-group (if the distinction between proper and not-proper Lorentz group should be relevant for the representation-theory, please mention it!).

I'm sorry if the question is badly structured or confusing, but I just can't put a better structured question together.

There are several reasons:

The reason why the complex Lorentz group ($O(1,3;\mathbb{C}$) or any of its subgroups) is needed in physics is furnished by Streater & Wightman in their famous book „PCT, Spin-Statistics, And All That” on page 13. I quote: „It is essential in the proof of the PCT theorem as we shall see”. Indeed, if you turn to page 142 and read that entire section on the PCT theorem, the complex Lorentz group and its local isomorphism to $ SL(2,\mathbb{C}) \otimes SL(2,\mathbb{C})$ are needed.

has a simple answer: it is not. There are separate topics. The representation theory of $SO(1,3;\mathbb{R})$ can be very well tackled without using complex group elements.

The answer is really simple. The Weyl spinor representation as the representation of the electron field includes besides the Lorentz group with its Space-Time generators also an Internal degree of freedom: the phase.

A physical representation should have the form:

The space-time generators are the rotation and boost generators so that you can go from one reference frame to any other.

Addendum: With respect to your other question in the comment first this:

Each of the two spinors $\xi_L$ and $\xi_R$ represents a precessing vector $S$, the total spin. See the image: 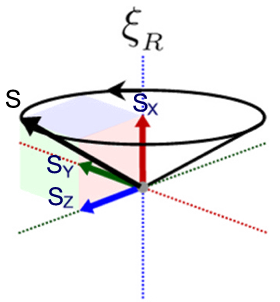 The precession axis (typically $S_z$ but it can be anyone) can have any arbitrary orientation in space, it can point into any direction.

The operator $e^{-i\phi}$ acting on $\xi$ makes the total spin $S$ precess around $S_z$. This corresponds with the phase of the spinor.

Mathematically, the calculation of the three spin vectors $S_x$, $S_y$ and $S_z$ and their sum $S$, the total spin, goes back to Leonard Euler (1775) and Rodrigues. (The Euler Rodrigues formula) using the equivalent real valued Euler parameter representation long before the discovery of QM and mostly forgotten.

I recently found a new formula to calculate all spin vectors at once with a single matrix multiplication explained here or in more detail in sections 1.2, 1.3 and 1.4 of chapter 1 and the whole chapter 2 here.

We now have a physical image of what a spinor represents and we know how to calculate it.

The equivalent Lorentz rotation operators acting on a spinor $\xi$ rotate the spin vectors $S_x$, $S_y$ and $S_z$ and their sum $S$, the total spin, around the $x$, $y$ and $z$ axis respectively. The spin of the bispinor field $\psi$ is given by the sum $S_R^z+S_L^z = S^z$ representing the axial current.

The Lorentz boost operators as they act on the bispinor field $\psi$ can be understood as follows: Since $\xi_R$ and $\xi_L$ propagate at opposing directions (in the rest frame) we must subtract $S_R^z-S_L^z = \vec{j}$ to find the vector current density which is proportional to the momentum. This is how a Lorentz boost in a certain direction provides a momentum in a that direction.

Not the answer you're looking for? Browse other questions tagged special-relativity group-theory representation-theory lorentz-symmetry topology or ask your own question.