I am recently learning about electric fields. So I encountered the concept of electric field lines. As they are not real but imaginary lines. Why do we need them to understand electric field?

I am asking that we have the equation for intensity $E$ for a point charge is $\vec E=C\frac{Q\vec{r}}{r^3}$. From this, we can know the magnitude and direction of the field at anny point of space, can't I? So why do we need field lines also to understand electric field? Is there any phenomenon or property of electric field that equations can't explain but field lines can. Is there any reason we don't use gravitational field lines?

If you have a negative electron, then it will attract a positive charge.

Each of these paths that the positive charge would want to move along, is called a field line. Clearly, the electric force direction (the electric field lines) varies with location in the vicinity of the electron. But also the magnitude varies:

When further away, the field lines are farther from each other than closer to the electron. So basically, if you draw many field lines, how closely spaced they are tells us where the electron attracts more strongly. See for example this graphic from Wikipedia:

Closer to an electron, the field lines are closely spaced. But with two electrons put together (left illustration), the paths a positive charge would follow are distorted because it now is attracted towards two points simultaneously.

Or equivalently (right illustration), imagine having an electron and a positive proton in the same vicinity. The electron attracts a positive charge, whereas the proton repels a positive charge - so at a point in between them, a positive charge is both pulled in and pushed in, giving a stronger combined pull and thus closer field lines. The combination of field lines at each point as shown gives us a visual idea of where the attraction is largest and where it is smaller.

All such field lines together (if you imagine drawing up infinitely many of them) make up the electric field.

Understand that at the starting level, especially when students aren't introduced to vectors or their cross products etc., the best way to visualize the direction of the force on charged objects is by electric field lines.

I'd like to add that for a single isolated charge creating a field, the direction is easy to understand, but fields lines are very useful when dealing with more than one charge, like suppose what would happen if you placed a small positive charge in between two other positive and negative charges as seen in this diagram. Here that small positive charge experiences a force in that direction, tangent to the field. 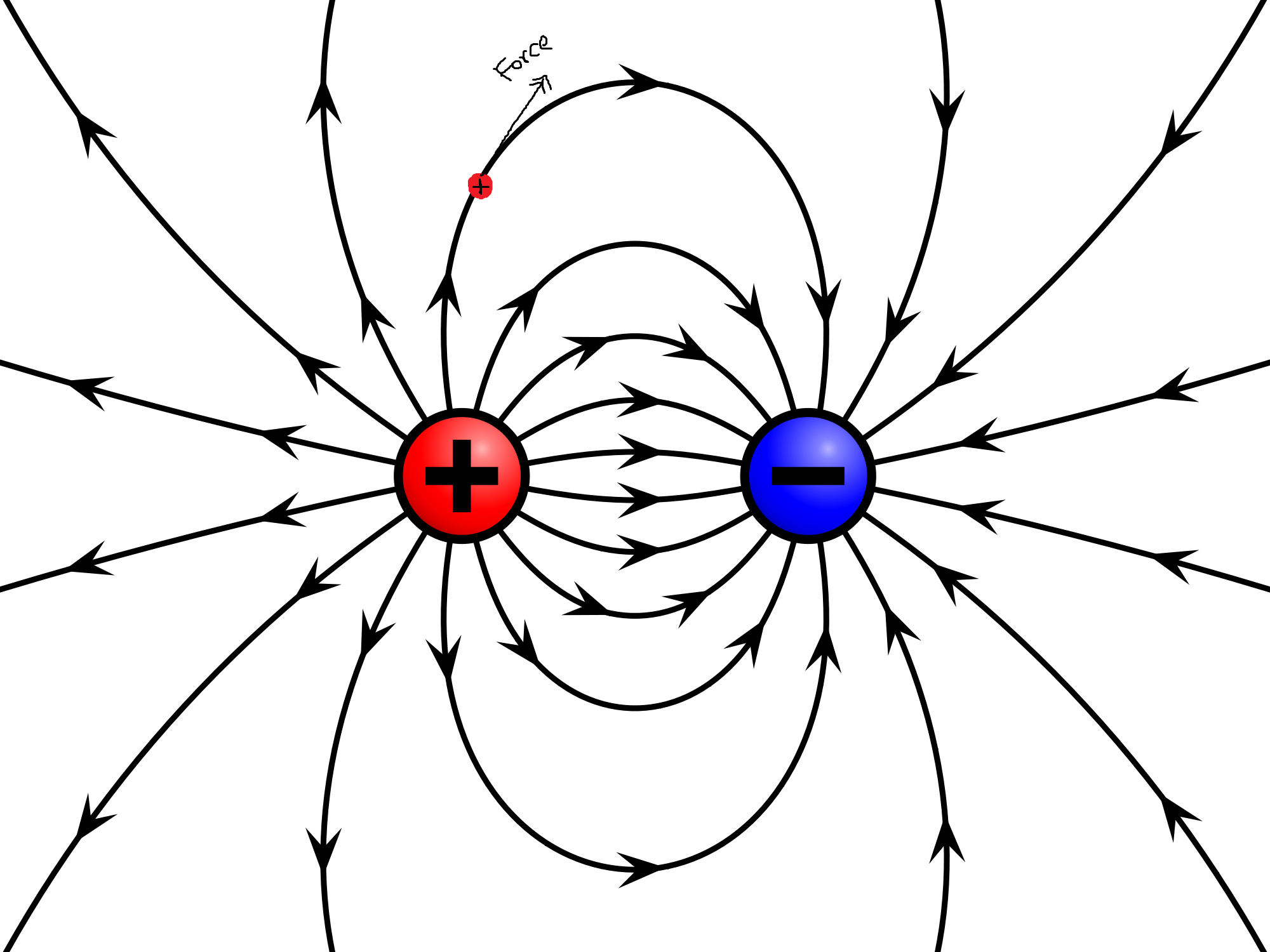 Representing and visualizing a spatial field is difficult : you would have to put an arrow on each point of space. Try it with a simple field !

So, you have useful tools to visualize a spatial field. Line fields are one of these tools. They show you the direction of the field and you lose information about the value of the field.

If the field is divergence free, (with conservative flux) , we know that the norm of the field increases as the lines get closer.

(Sorry for my english)

Not the answer you're looking for? Browse other questions tagged electrostatics electric-fields education vector-fields visualization or ask your own question.