Why is iron the peak of the binding energy curve?

If Nickel-62 and Iron-58 have more binding energy per nucleon than Iron-56 does, then why is iron-56 shown as the peak of the binding energy curve? Also, does adding neutrons always make the atom more stable because it will increase the strong nuclear force but not add any more electrorepulsive force?

Iron-56 (56Fe) is the most efficiently bound nucleus meaning that it has the least average mass per nucleon. However, nickel-62 is the most tightly bound nucleus in terms of energy of binding per nucleon. (Nickel-62's higher energy of binding does not translate to a larger mean mass loss than Fe-56, because Ni-62 has a slightly higher ratio of neutrons/protons than does iron-56, and the presence of the heavier neutrons increases nickel-62's average mass per nucleon).

In any case, iron-56 is not necessarily usually shown (anymore) as the highest binding energy per nucleon, mostly because it's not usually possible to show the tiny difference in binding energy between iron-56 and nickel-62. The difference is so tiny that accounting for the fact that the neutron is 0.1% heavier than the proton, instead of treating all nucleons equally, changes which is bound more tightly. Because of this tiny difference, it's unlikely that you'll see one depicted as higher than the other on any plot that actually shows both of them, like this one (source: https://www.asc.ohio-state.edu/kagan.1/phy367/Lectures/P367_lec_14.html): 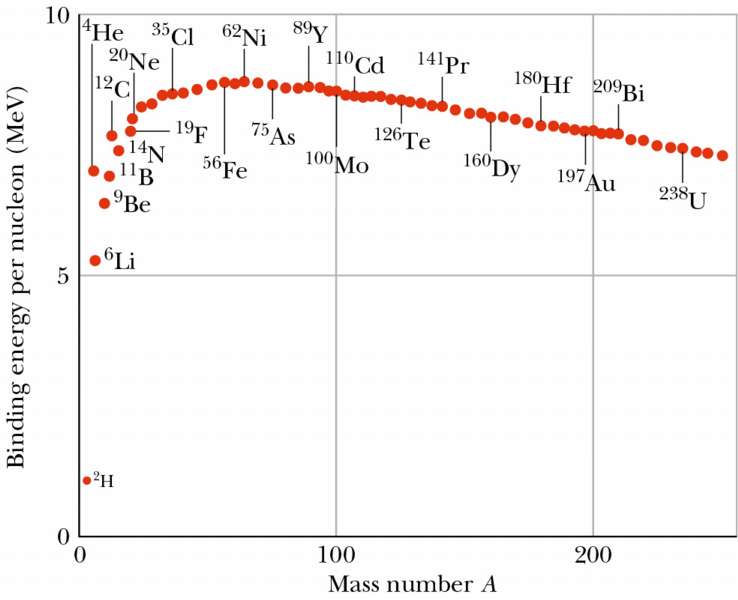 Can you tell which of the two has higher binding energy? I certainly can't.

0
Why does the binding energy curve ever decrease?
0
Iron has the highest binding energy but if it happened to fall apart would the electrostatic force accelerate the newly formed nuclei?
3
Is there more iron or nickle in the core of a pre-supernova star?