My conceptually understanding draws on the section on the Clausius Inequality from Finn's Thermal Physics. Attached is the graphic used for the derivation in the textbook. 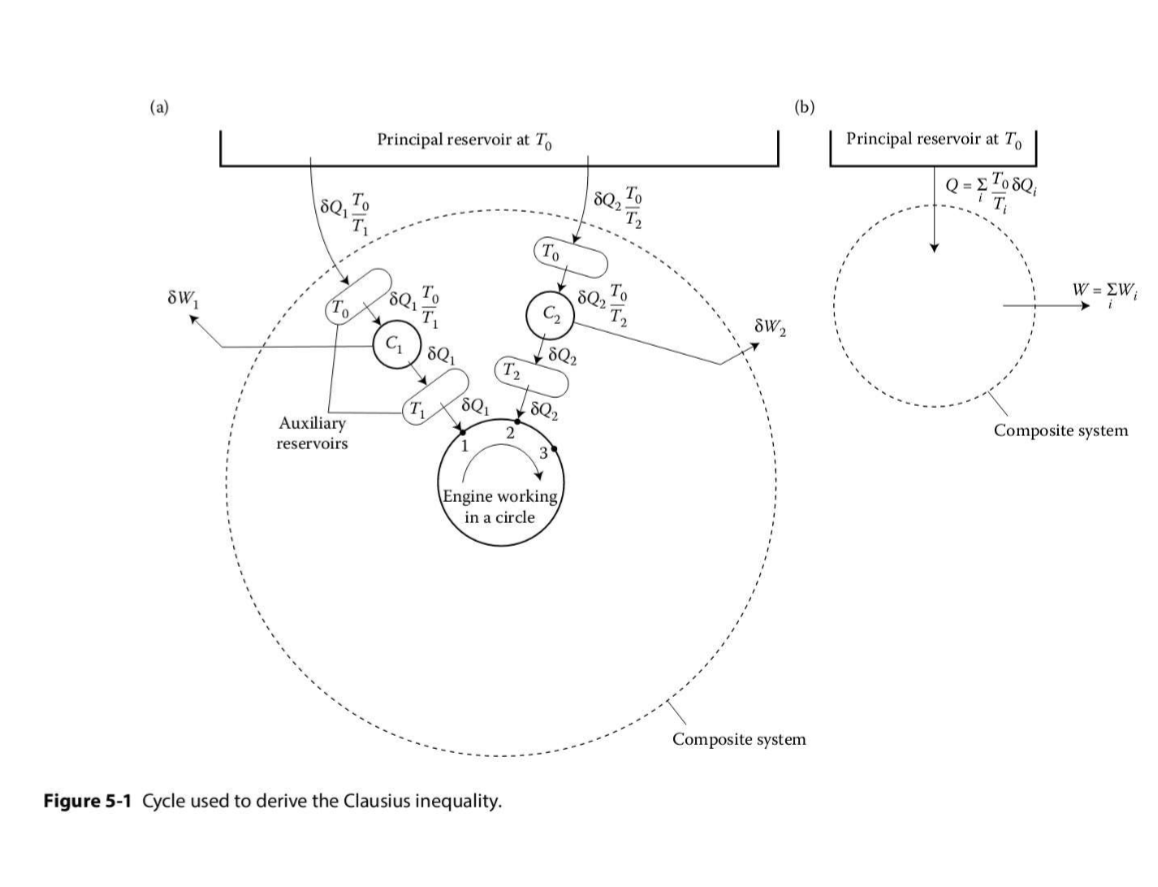 If I'm to understand properly, the Clausius Inequality is usually demonstrated with an engine that is designed such that at the end of the cycle, the state of the working substance is unchanged. The engine is driven by a series of Carnot engines drawing from a principal reservoir at $T_0$. The engine gains heat $\delta Q_1$ from $C_1$, the first Carnot engine, bringing it from state $1$ to $2$. This heat was rejected from $C_1$ after doing work $\delta W_1$. It did work from heat supplied to it from the other auxiliary reservoir at $T_0$, delivering $\delta Q_1 \frac{T_0}{T_1}$. It passed the heat from the principal reservoir, which I think is because they're both at $T_0$. I don't know why the principal and auxiliary reservoirs exchanged heat when they're the same temperature, but it might be that when the auxiliary reservoir gave heat to $C_1$, the principal reservoir then exchanged heat to it as the auxiliary reservoir would've dropped in temperature from doing so and then heat exchange would've been ushered. This process is repeated an arbitrary number of times in the exact same setup, such that the system goes from states $1$ to $2$ to $3$ and so on.

The composite engine can then be constructed once considering the net heat and work exchanges of the system.

For some reason the engine isn't rejecting heat given to it by auxiliary reservoir $T_i$, perhaps because it's not doing any work. However, the net processes of the composite engine is receiving heat

And since the composite engine is converting heat into work without rejecting any, this is a violation of the second law of thermodynamics, as $\Delta U = 0 = Q - W \implies Q = W$ and the process is a cycle. However, there is apparently a way to avoid this problem which is confusing to me. Here, work is positive and heat is positive, as the work is being done on the surroundings and heat is being applied to the working substance. However, the only way this process can occur and be physically possible is for both $W$ and $Q$ to be negative, work being done on the system and heat flowing out. Or, both $W$ and $Q$ can be zero.

This directly implies that:

Since $T_0$ is strictly positive, this implies that the rest must be strictly negative.

here $dQ$ is noted to be an inexact differential. Which leads us to Clausius's inequality.

I will now list out all the confusions I have with the derivation.

3) Why isn't the engine working in a circle rejecting heat?

4) The only way this is physically is if both $Q$ and $W$ are negative.. but in the composite engine we've constructed.. it's not? So how can we just change our minds and pretend this is still the same engine?

5) We proved this is the case for some engine we made up in our heads. How do we know this applies to all engines?

7) The textbook then notes that if the cycle is reversible, than the cycle could be taken in the opposite direction and the proof would give

Where once again $dQ$ is meant to be an inexact differential. But this implies $W = Q \ge 0$, which should violate the second law of thermodynamics (namely Kelvin's law). Why is this valid?

8) Since a reversible cycle will apparently have two possible inequalities, the only way for both to be satisfied is for

I know these are a lot of questions, but any answered and as many as possible would mean a lot for my understanding, as I feel this is a key thing to understand in this discipline.

If you still have any doubt, please ask.

Not the answer you're looking for? Browse other questions tagged thermodynamics entropy reversibility heat-engine or ask your own question.

1
Efficiency of a real engine
0
Clarification on Clausius Inequality
3
Clausius Inequality with three reservoirs
1
Formula for the heat input in a heat engine
4
Why does there need to be an isothermal compression in a Carnot cycle?
2
For irreversible processes , why is $\frac{Q_1}{T_1} < \frac{Q_2}{T_2}$?
1
Confused with Entropy and Clausius inequality
0
Principle of Maximum Work
1
Violation of Kelvin's statement of second law of thermodynamics
0
Does this system violate the second law of thermodynamics?