What is the electromagnetic 4-vector potential in Reissner-Nordström coordinates?

If you have the usual Reissner-Nordström metric of a charged black hole, is the electromagnetic potential of the black hole still:

A Schwarzschild black hole has no charge and no electrostatic potential. This is the potential of a Reissner-Nordström black hole, in Gaussian units.

If you are talking about the potential of a point charge at rest outside a Schwarzschild black hole, with $r$ being some measure of distance from the charge rather than the Schwarzschild radial coordinate, then this is not its potential. The potential and electrostatic field of a charge at rest outside the hole are not spherically symmetric around the charge as in flat spacetime, because the curvature of the black hole warps the field.

The electrostatic potential of a point charge at rest outside a Schwarzschild black hole was investigated by Copson in 1928 and his solution was corrected by Linet in 1976. The solution is

where $M$ is the mass of the black hole, $r$ and $\theta$ are Schwarzschild coordinates, $q$ is the charge of the point particle outside the horizon, and the point particle is at rest at $r=b$, $\theta=0$. This is written in units where $G=c=1$. 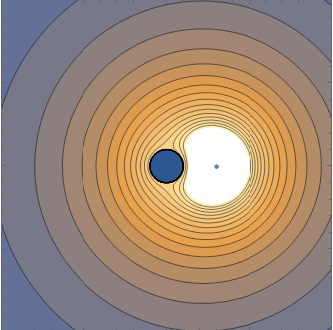 The asymmetry of the field causes a gravitationally-induced electrostatic self-force on the charged particle. It is directed away from the hole and, in the frame of a freely-falling observer instantaneously at rest at the position of the charge, has magnitude

This was first calculated exactly by Smith and Will in 1980.

Interestingly, as $b\rightarrow2M$ so that the charge is just outside the horizon, the potential does become symmetrically centered on the hole, rather than on the charge, and is just $q/r$ outside and 0 inside.

Not the answer you're looking for? Browse other questions tagged electromagnetism general-relativity black-holes reissner-nordstrom-metric or ask your own question.