Is Relativity of simultaneity just a flaw in perception?

So I went through a couple of different books on special relativity ( including Einstein's own book) and I just can't seem to accept relativity of simultaneity as a real thing. I'll explain my confusion and hope that people here will help me to understand.

So in Einstein's train thought experiment, the observer on the railway line reference frame sees the two lightning strikes ( occurring at say A and B) as simultaneous because light from A and B reach him at M at same time ( M is the midpoint of AB) But in the train frame Einstein says

But the events A and B also correspond to positions A and B on the train. Let M' be the mid-point of the distance A ~T B on the travelling train. Just when the flashes 1 of lightning occur, this point M' naturally coincides with the point M, but it moves towards the right in the diagram with the velocity v of the train. If an observer sitting in the position M' in the train did not possess this velocity, then he would remain permanently at M, and the light rays emitted by the flashes of lightning A and B would reach him simultaneously, i.e. they would meet just where he is situated.

So my question is this: just because we see the two events ( by way of receiving light) at two different times because we purposely moved towards one light ray, it shouldn't mean the two events didn't occur simultaneously. It's just that we see it Happen before the other because we moved to receive one light signal earlier but the two events still occurred simultaneously. Please tell where am I misunderstanding. Edit: the possible duplicates are no where near my question. I know that speed of light is constant. Please try and understand my question better.. what I am asking is this thought experiment by Einstein gives the impression that we consider things to be simultaneously if we see ( receive light) from them at same time, but happening and perceiving are two different things. The light strikes could have happened simultaneously but I only moved toward one light signal and hence received it before the other.

I encountered this problem too when I was first introduced to special relativity. When explaining SR people want to make it as fundamental as possible, meaning everything is explained in terms of travelling light and the time it takes for the light to travel. The advantage is that you get a really fundamental understanding since everything is built up from a few postulates. A great disadvantage is that this adds another layer of complexity that mixes observational time dilation with SR time dilation. It can be hard to see whether something is delayed because light has a finite speed or because of actual time dilation.

For me things started clicking when I looked more at Minkowski diagrams. Consider this picture for example (Source: https://www.sparknotes.com/physics/specialrelativity/kinematics/section3/page/2/). In this picture you have a stationary observer, call her Alice, and another observer, let's call him Bob, that is moving with velocity $v$ to the right indicated with prime coordinates. Now what events are simultaneous for these observers? For Alice everything that lies on a horizontal has the same time coordinate, so occurs at the same time. For Bob something similar holds: every pair of events that lies on a line that is parallel to Bob's x-axis is simultaneous to Bob. So this is meant when we say that two events happen at the same time.

You can draw this entire thought experiment on a Minkowski diagram. First draw A and B on the stationary x-axis at equal distances from the origin. You can draw the light signals if you want by drawing 45$^\circ$ lines. The time between two events (in some frame) can be calculated by drawing two lines parallel to that frame's x-axis and calculating the minimal distance between those two lines. For Alice these lightning events lie on the same line so the time between them is zero for her. For Bob these events don't lie on the same line anymore so they aren't simultaneous. The time it takes for light signals to reach M can be done similarly. 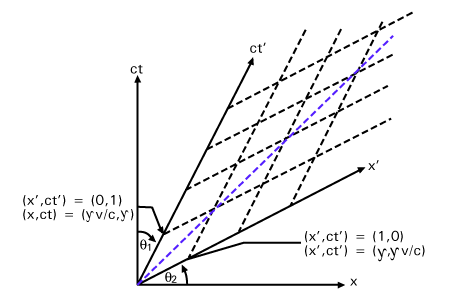 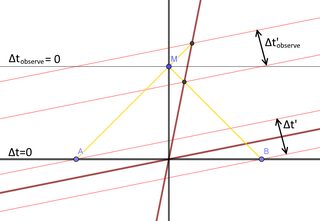 I know that speed of light is constant

The reason this is being pointed out to you is that this is the key. It's not about what we "see" here. In thought experiments like this we assume the observers know how to do basic math and determine when the light flashes were released based on the time they see the light and the distance the sources are away from them.

Each observer "thinks" they are at rest. The person on the railway sees light from two sources reach him at the same time. Since the sources were equidistant from him, he determines, since each wave traveled at the same speed, the lightning strikes happened at the same time.

Relativity has nothing to do with delay in perception. We always assume we have done the math to take the delay of our perception into account with a constant speed of light$^*$. For a more rigorous treatment of all of this, you should look at the other answers talking about Minkowski space-time diagrams.

It's just that we see it Happen before the other because we moved to receive one light signal earlier but the two events still occurred simultaneously.

You are falling into the trap that the railway frame is the "absolute rest" frame that sees reality for what it really is, and the moving frame is wrong. And this is what a "naive" mathematician on the railway would say to the person on the train after they got off and discussed what happened. "No, you were just moving, so you hit one light ray earlier than the other"

But according to the person on the train, she is at rest in her own frame. The person on the railway is moving. So she would say to the man on the railway "No, they occurred at different times, but due to how you were moving you moved away from the early source and towards the late source, thus they reached you at the same time." Or using your language I quote above: " It's just that we see it happen at the same time because we moved to receive each light signal at the same time, but the two events still occurred at different times."

Both interpretations are equally valid; it just depends on what reference frame you choose to be in.

The person on the railway will launch the balls at the same time according to him at the programmed speeds defined above. Well then the person on the train will catch the balls at different times, but this is because according to her the balls are traveling at different speeds. When she does the math, she will indeed agree with the man on the railway. They will both agree that the balls were launched simultaneously. (Note that this is a classical physics treatment. If we were to apply the "correct" velocity addition formulas for special relativity for the two launched balls we would in fact arrive back at relativity of simultaneity)

It’s not about ‘seeing’ by ‘receiving light’.

The space-time concept is key here.

You can create a 3D lattice of meter sticks with a clock at every corner, all synchronized. Another, relatively moving , person could do the same. As they move by each other, you could take pictures of two clocks as they passed by each other, as close as you want. The photos would show the two sets of clocks aren’t, and can’t be, synchronized if they’re moving relatively.

Some of the famous paradoxes are simpler once you start to think about them that way: “what are the time & space coordinates in this frame? And what are they in that frame? Ok, that makes sense “

In fact, the two observers will reach different conclusions about the simultaneity of the lightning strikes. The guy in the train would say that it was simultaneous, but the observer on the platform would say that one struck before the other. This is a consequence of special relativity. The key insight that makes this a reality, is the fact that light has the same speed everywhere, that is $c$, whether measured by an observer on the train, or the guy observing this from outside (who would measure the speed of light to be $c$, instead of $c+v$).

We have to use Lorentz tranformations that directly predict this. If the guy in the moving frame would measure $\Delta t^{'}=0$, then the flashes measured by the other observer in a rest frame $\Delta t$ would not be zero. In fact, if this were a train of some finite length, the two observers would not agree on the length of the train either.

There is a second step in the logic, as you suspect. But it's so "obvious" it gets overlooked.

The observer on the train is also halfway between the two ends of the carriage. They see B before A. They know that the actual time is earlier by some amount but this is the same (L/2c) for both. So they say B happened before A.

47
If I am travelling on a car at around 60 km/h, and I shine a light, does that mean that the light is travelling faster than the speed of light?