Is the Lorentz force due to the interaction of a uniform magnetic field and the wire's field? 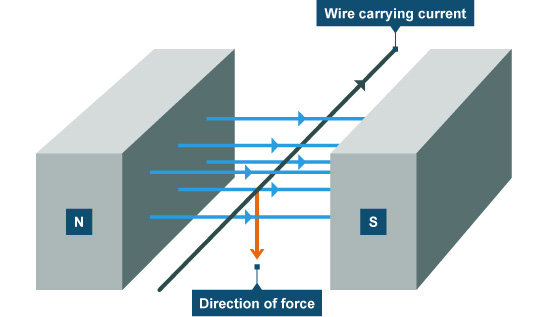 Suppose there is a wire carrying a current through a uniform magnetic field, as shown in the figure above. The force felt by the wire is represented by the downwards orange arrow.

Is this force the result of the interaction between the wire's magnetic field (concentric rings; not shown) and the uniform magnetic field? In other words, in order for there to be a magnetic force, must there always be two magnetic fields interacting?

Another way to imagine this: is the Lorentz force (magnetic) experienced by a point charge moving through a uniform magnetic field always the result of the interaction between the magnetic field generated by the moving charge and the uniform field through which it is traveling?

Older textbooks often attributed the force on a current-carrying conductor in an external magnetic field to an interaction between the external field and the conductor's field.

The idea goes back to Faraday, who conceived of magnetic field lines as 'lines of force', under tension and pushing out sideways. Think of the pattern of field lines between two bar magnets placed in line, with the North Pole of one facing the South Pole of the other with a gap between them. Can't you just feel those lines of force pulling the magnets together? Even more interesting is the resultant field pattern that you get for the set-up you've shown in your diagram. Many of the resultant field lines (co-inciding at each point with the direction of the resultant field of wire and magnet) run in curved paths from the N to the S of the magnet. But the lines are closer together (as the fields re-inforce) above the wire than they are underneath it (where the fields tend to cancel). So the lines above, under tension and pushing out sideways, act like catapult strings, forcing the wire downwards, in accordance with your Fleming's left hand rule!

Maxwell developed the theory of Faraday's lines of force mathematically. The Maxwell stress tensor, defined for each point in a magnetic &/or electric field, was the outcome. I believe that the motor effect force on the wire can be correctly predicted using this concept.

For simple set-ups such as yours, it is, of course, far easier to consider the force to be due to a direct interaction between the magnetic field and moving charges in the wire – the good old Lorentz force law.

The Lorentz force experienced by a moving charged particle or a wire in which a current is flowing is not the result of the interaction between both magnetic fields, but only between the external magnetic field and the intensity of the current. You can see this explicitly in the expression for the Lorentz force.

For a charged particle:

In both cases, only the external field is the one interacting directly with the current of the system. While it is true that a charged particle or a current by themselves produce their own magnetic field, but this is usually neglected in calculations.

If the current is strong enough, the magnetic field of the charge or wire will actually interact with the magnetic moment of whatever is causing the external field (i.e. a magnet) and produce additional interactions.