To what extent do (man made) generators of heat from internal sources in earth's system cause climate change?

So I'm very far from a climate scientist but I've always wondered, why don't things like electric heaters, lightbulbs, etc, contribute to climate change, or even things like the accelerated decay of radioactive materials -- human caused factors. I'm fairly sure it's due to the equilibrium being very stable to relatively small factors that we humans contribute and it can simply radiate away into space, but I honestly have no idea.

Small amount for what I feel is still a gross overestimation of 100x 100W lightbulbs per person as an internal energy output, but why isn't this a factor especially as the world becomes more energy hungry? Is it 'heat neutral' I find it hard to imagine that something even like a wind turbine generating the electricity would decrease the heat energy in the air more than an electric heater powered off of it would. And why large nuclear energy sources human accelerated don't play a large effect.

The power involved does not represent a significant fraction of the total energy budget, so it can normally be ignored. Assuming (per Wikipedia Solar Energy) that the energy received on earth from the sun is about $3\times 10^{24} \text{J/year}$ and total energy production on earth is (per Energy Consumption) about $6 \times 10^{20} \text{J/year}$, worldwide energy production would represent a value of 0.02 of one percent -see this chart.

There's a huge amount of fudge there. The value really represents energy consumption, so the heat output of production will be greater. At the same time, production from water/solar/wind are counted, when they do not produce additional heat (since it's already counted in the solar figure). But the figures would need a 50x boost to even reach a 1 on the chart. 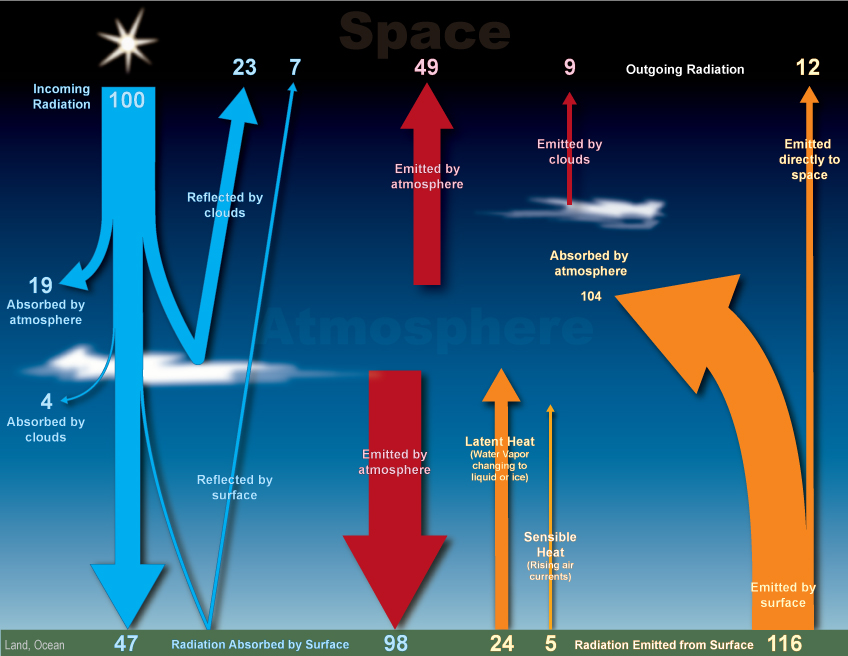 With that calculation using heat capacity, that would create very a rapid rise in temperature of the atmosphere, year after year. It is not the proper way to analyze the effects of an extra forcing. Instead, one should look at steady state. Currently, the surface of the Earth radiates about 400 W/m$2$. An additional 8.5 W/m2 means a 2 % increase. Because of the Stefan-Boltzmann $T^4$ law, this would in steady state give a 0.5 % rise in temperature, about 1.5 degrees. (Very crude back-of-the envelope estimate)

Whether effect of energy consumption on global warming is substantial is not obvious. Should we compare it to the effect of $\text{CO}_2$ already present or $\text{CO}_2$ introduced during the same time the energy was consumed ?

As @Accumulation correctly points out, the forcing effect of energy added into the system in one year is only temporary, as the increased average temperature due to it will not remain after energy consumption is curbed because energy can get lost by radiation. On the other hand, the effect of $\text{CO}_2$ added to the system is more long term, because $\text{CO}_2$ cannot get out so easily as the surplus energy.

So, if we are to make this comparison, we should compare the effect of energy production to the effect of net $\text{CO}_2$ already in the atmosphere.

We can compare the two effects by comparing their contribution to net energy they contribute to yearly energy increase of the atmosphere, which manifests as increasing temperature.

Increasing $\text{CO}_2$ in the atmosphere at the current rate is reported to provide around 3 W (2016$^*$) of power per squared meter of Earth's surface more than in balanced radiative equilibrium state, thus $4.8\text{e}22~\text{J}$ per year (this number increases in time as concentration of $\text{CO}_2$ increases). On the other hand, net human energy production per year (2015) is estimated to be $5.5\text{e}20~\text{J}$ and this energy eventually ends up heating the planet too.

Comparing the two numbers, human energy production per year is around 1% (maybe it is higher, a value of 1.7 % is given by this paper for fossil fuels only: https://agupubs.onlinelibrary.wiley.com/doi/full/10.1002/2015GL063514) of energy stored in the system due to greenhouse gases pollution, which is not a substantial, but still a noticeable effect. In time, importance of energy production will probably somewhat increase (if $\text{CO}_2$ emissions get lower than they are today and radiative forcing will decrease).

Decreasing impact of energy consumption is very hard, especially in developing countries that play catch-up to the developed countries. Certainly it is much easier to convince people to limit/stop burning coal and fossil fuels and use other sources of energy, than to limit/stop consuming equivalent energy in electrical devices.

Presumably, that 0.95 refers to the lightbulb being 5% efficient. However, that is incorrect reasoning. Efficiency does not refer to how much is turned into useful work instead of turning into heat, it's how much is turned into useful work before turning into heat. If a lightbuld produces 95W of heat and 5W of light, that light is eventually absorbed by something, and that something will then be heated up. So all of the energy of the lightbulb eventually turns into heat. Pretty much every use of energy eventually turns into heat, with only a few exceptions (an example of an exception would be that any energy used to build a skyscraper that goes into lifting building materials doesn't turn into heat ... at least not unless the skyscraper is demolished), and those exceptions are a tiny percentage of energy usage.

The atmosphere has a mass of about 5.15×1018 kg (Wikipedia)
specific heat capacity of air:
SHC of air 0.716 https://www.ohio.edu/mechanical/thermo/property_tables/air/air_cp_cv.html

Both the mass, and heat capacity, of land/water is much larger than that of air, and for air to remain at a high temperature, the ground and water below it has to be brought up to that temperature. You can have a region with cold ground and warm air, but for that situation to persist, that warm air has to be coming from someplace else that does have warm ground/water.

Small amount for what I feel is still a gross overestimation of 100x 100W lightbulbs per person as an internal energy output, but why isn't this a factor especially as the world becomes more energy hungry?

Besides this being a tiny proportion of the total heat, it's not permanent. The main concern over CO2 is not that emitting CO2 in 2019 will make the Earth hotter in 2019, or even 2020 or 2021, but that all the CO2 emissions are cumulative, and thirty years from now we'll still be dealing with the effects of CO2 emissions from today. The urgency of anti-warming activists is based on the premise that global warming has a lot of momentum, and it will take a lot of time to turn around warming trends. Simply adding heat to the system, on the other hand, doesn't have the same long-term effects. Heat causes objects to radiate heat. Without the greenhouse effect, raising the Earth's temperature means that it radiates more heat, and so without a constant influx of new heat, it will cool back down. So even if we were to raise the Earth's temperature by turning all our heaters on full blast, this wouldn't be a threat to later generations the way that CO2 emissions are asserted to be. CO2 reduces the amount of heat that the Earth emits, and so can permanently increase the equilibrium temperature.

Is it 'heat neutral' I find it hard to imagine that something even like a wind turbine generating the electricity would decrease the heat energy in the air more than an electric heater powered off of it would.

If you stick a heater next to wind turbine, all of its energy is coming from the energy being taken from the wind, and all of that energy would have turned into heat anyway (see my first paragraph). For the heater to result in a net increase of heat would be a violation of conservation of energy. Same with renewal energy in general, such as solar, geothermal, hydroelectric, or wave.

According to Mark Flanner - "Integrating anthropogenic heat flux with global climate models" - thermal energy released from non‐renewable sources is about 1% of the heat gained from enhanced greenhouse effect from the raised CO2 levels, aka global warming. Human produced heat from burning fossil fuels does count, but it is a very small component compared to the Greenhouse Effect.

Heat from burning biological materials like wood does not directly raise CO2 levels when the whole process lifecycle is considered; vegetation drew CO2 out of the atmosphere to make those fuels and burning returns it to the atmosphere. As long as the average total biomass doesn't decline it will not contribute to raised atmospheric concentrations; it can be taken up by vegetation again in near equal amounts.

Not the answer you're looking for? Browse other questions tagged atmospheric-science climate-science or ask your own question.

1
Are heat emissions as bad as greenhouse gasses?