What are the horizontal forces on a heeling ship?

Consider the following image from Wikipedia: 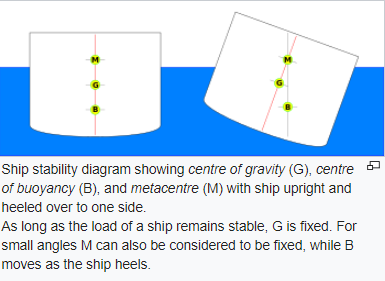 The article states: "Whenever a floating body in a liquid is given a small angular displacement, it will start oscillating about some point, called the metacentre." I take this to mean that if I put a dot of paint at the metacenter of the boat, then as the boat oscillates, the dot of paint would be perfectly stationary (except that it would rotate in place).

My understanding of the forces is:

However, if the only forces on the boat are gravity, pointing down, and buoyancy, pointing up, there are no left or right forces. Nonetheless, the article implies that the center of mass moves left and right.

How is this possible?

Sorry for my english. It's OK for equations but for text, it's difficult !

To define the metacentre, we limit ourselves to movements such that the volume of displaced water remains constant ("Isocarene" movement in French, I do not know how to translate it). In this type of displacement, Archimedes thrust always balances the weight. For a small inclination of the boat, if we limits to the first order in the inclination, the intersection of the vertical passing through the center of thrust is a fixed point of the boat: the metacentre.

When we establish the period of small oscillations of the boat, we make a number of approximations. We suppose first that we can apply the laws of static (Archimedes' thrust) to the moving ship. It is surely approached! But in this case, there is no horizontal force. The center of gravity remains on a vertical axis.

The question arises as to whether one can have a fixed displaced volume and a fixed center of gravity. I think that strictly speaking it is not possible but at first order in the angle of rotation, the change in volume is zero and the hypothesis is consistent.

As the formula that gives the period of oscillation is called Bouguer's formula, I went to see Bouguer's book "Treaty of the ship, its construction and its movements" 1762 https://archive.org/details/bub_gb_lh1ZBtRvAb0C/page/n6 (The translation is from me and it's old French that I sometimes struggle to get in shape!)

Third section, Chapter I: From the point around which the vessel oscillates, which is called roll, and the part that gravity has in these oscillations. (p 369 ....)

"The problem is solved, it is no longer possible to doubt that it is around its center of gravity that the ship makes its oscillation." ... "It must be remarked that we neglect here the resistance which the water makes to the swaying of the ship; just as the resistance of the air to the movement of pendulums is usually neglected. This resistance is as null, compared to the other forces we consider, because no matter how large the oscillations of the ship, it has, because of the figure, that little water to move and that it does not shocked her with rather little speed. It is still assumed that the alternative inclinations are not large enough, so that the metacentre changes substantially in height relative to the center of gravity. "

Hope it can help !

I agree with Vincent's answer, and am writing just to describe what I learned about this problem.

The statement on Wikipedia is incorrect (I've since deleted it); a ship does not oscillate about its metacenter. In the simple model of ship rolling, the only forces on the ship are the buoyant force and gravity, both of which are vertical. It is generally assumed that these forces are equal in magnitude, so that the center of mass of the ship doesn't move. The ship oscillates about its center of mass.

However, some sources erroneously state that the ship oscillates about its metacenter. I can speculate that this occurs for two reasons:

2 - The buoyant and gravitational forces form a couple (a torque with no net force). The torque from a couple is independent of the origin chosen, and so the torque can be computed about the metacenter, even though the torque about the center of mass is desired.

3 - Few sources seem to explicitly state that the center of mass doesn't move, although this is implied in the analysis of those sources which analyze the motion correctly.

The problem from the International Physics Olympiad which I was reading when I encountered this question is also incorrect, as is the official solution to that problem.

In this case there are no horizontal forces necessary to produce a torque, and flaudemus is correct that it is the torque that counts. You can create a torque with only uneven upward forces. The question seems to be why is rotation not about the center of mass. The reason is due to the buoyancy's requirement that the ratio of the object's volume above and below the water level remain constant assuming the object is not bouncing.

When the object is tilted, the center of mass has to rise in order to keep the volume of the object above water constant. You can pick an object like a cubic block an do a simple calculation to show this, but it is easy to visualize the case where you tilt the object enough to raise the center of mass to the level of the surface of the water.

The second important ingredient is, that the floating body is rigid, i.e., it does not deform, an it has an inertial moment.

Concerning the net force, it will be zero in both cases, the left and the right figure. The buoyancy force acts vertically up, and the gravitational force acts vertically down. The floating body will sink into the water until both forces are of the same magnitude. Since they act in opposite directions, the net force is zero, and the linear momentum of the floating body is constant in time, i.e., it is zero.

What differs between the two figures is the magnitude of the torque. In the left case, the two external forces act along the same vertical axis, and the resulting torque is therefore zero. In case of the right figure, the buoyancy force, which acts vertically upwards from point B is not collinear with the gravitational force, which acts vertically downwards from point G. The result is a torque that acts as to restore the original equilibrium position of the body shown on the left.

In order to bring the floating body into the tilted position shown on the right, some external agent had to do work against the torque that gradually built up. This means that the floating body has acquired some potential energy as compared to the equilibrium situation on the left. The external agent can achieve the tilt by applying an external torque without applying a net linear force.

In a realistic system, this motion will suffer from friction, which gradually converts kinetic energy into heat flowing off into the surrounding water. This situation corresponds to a damped harmonic oscillator.

This principle is responsible for the stability of ships against tilt. A ship will be the more stable, the lower point G is. This is why modern yachts have a lot of heavy mass in their keel. The restoring torque will also depend on the shape of the floating body, which will play a prominent role, if the tilt becomes larger and larger.

A more elaborate treatment can be found here.

Not the answer you're looking for? Browse other questions tagged forces torque buoyancy or ask your own question.