For an incompressible potential flow around a smooth rigid body, is it true that the pressure on the surface of the body is proportional to $a\cos^2\theta+b$ where $\theta$ is the angle the inward unit surface normal vector makes with the velocity of the flow at infinity for some constants $a$ and $b$?

The reason for my conjecture is the following two examples.

Here is a counterexample.

Consider the 2 dimension problem. Let $e^{i\alpha}\zeta$ where $\alpha$ is a real number and $\zeta$ a complex number. It is a complex velocity potential function generating a constant velocity field pointing towards $e^{i\alpha}$. Let $\omega:=e^{i\alpha}\zeta+\frac{e^{-i\alpha}}{\zeta}$. $\omega(\zeta=e^{i\theta})=0, \,\forall\theta$. $\omega(\theta)$ is the solution for the potential flow since it satisfies the boundary on the unit circle $\zeta=e^{-i\theta},\,\forall\theta$.

The question asks about incompressible potential flow, and a conjecture that the OP made that the pressure on a body is always proportional to $a\cos^2\theta+b$, where $\theta$ is related to the local surface angle at the point where the pressure is to be calculated.

In the comments, I suggested that it would be a simple task to find cases that would disprove the conjecture, and I didn't consider that any answer beyond that would be warranted. However, I now think it is worthwhile to explain why no simple equation would be applicable.

Incompressible potential flow is governed by Laplace's equation, which is an elliptic partial-differential equation. All such equations have the property that solutions at any point depend on conditions everywhere, not just at the point being calculated. Physically, this means that pressures at any point on a body depend on the entire shape of the body, not just the local surface angle, and is related to the fact that incompressible flows can be considered as having infinite speed of sound.

To get more specific, equations like the OP's would predict that changing the shape of the aft portion of an airfoil would change the pressures only in that aft portion. This is shown to be wrong in the following figure taken from this report https://www.nrel.gov/docs/fy05osti/36335.pdf. The figure gives potential flow results for an airfoil for three values of flap deflection. In spite of only changing the aft shapes (the flaps), the pressure distributions are clearly changed over the entire airfoil surface. 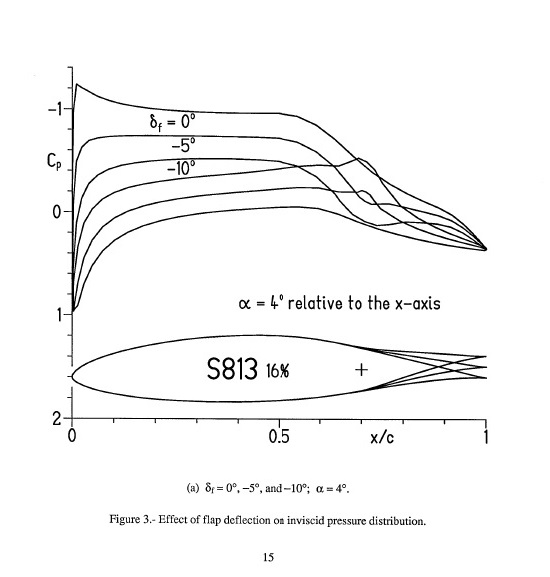 Not the answer you're looking for? Browse other questions tagged fluid-dynamics pressure flow potential-flow or ask your own question.

2
Why does (potential) fluid flow bend around a solid surface in the flow?
0
When is it appropriate to drop pressure terms when applying conservation of momentum to a fluid?
2
On a liquid-air surface, does the pressure gradient always have the same direction as the normal vector of the surface?
0
Determine a relationship for the velocity at the edge of a boundary layer
0
Calculate the stream line, which goes through the stagnation point and defines the surface of the semi-infinite body
0
Pressure difference between two points on the Earth's surface
1
Why fluid pressure force is perpendicular to surface
1
Flow on an inclined plane and Bernoulli's principle