Three Dimensional Torque on a Sphere 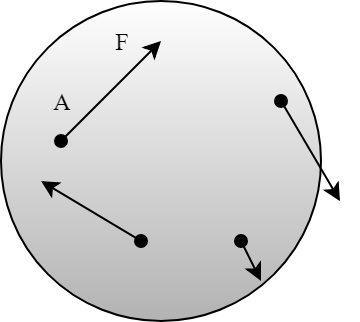 The goal is to find a magnitude and direction of the force such that there is no net torque on the ball.

My question is this: Can I simply decompose the forces into its $x$, $y$, and $z$ components, look at the ball along each axis, treat it as a 2D situation and solve for the force and direction of $F$? This is the only way that I can think about doing it, as the only prior experience with torque I have is in 2D. This doesn't quite make sense to me as rotating an object along the $x$ axis and then along $y$ is different than rotating it around $y$ and then $x$. Additionally, to me at least it makes sense to only have one axis of rotation, even in three dimensions...

If not, then how would I go about solving this? I am comfortable with linear algebra (vector addition, dot products, cross products, ect...) and understand that I might have to use them in the solution to this problem.

Edit: If this helps, I know that this case is pretty trivial to solve when the forces all point towards $A$, along the sphere's surface. I just cancel out the magnitudes of each of the other forces with $F$ much like a translational motion problem. Am I on the right track to a solution or no?

Each force on the sphere contributes to the total torque. You can calculate the torque from each force as $\vec{\tau} = \vec{r} \times \vec{F}$ ($\vec{r}$ is the vector from the point of consideration to the point of force application, and $\vec{F}$ is the applied force vector). Then sum all the torques together. If the result is non-zero, you will need to apply a counter-torque to null it out.

Note that the required counter-torque will not in general be possible to apply from a single arbitrary point. Imagine a globe and a point on the equator is applying a torque eastward. If you pick a point at the north pole, it's not possible to apply any counter (westward) torque. And if you pick a point between the equator and the north pole, you can counter the westward torque, but only by applying a force that will also try to rotate the pole over. The torques won't cancel.

For any arbitrary torque that you have to cancel, the point of application can only be on a single great circle on the sphere. Because for $\vec{r} \times \vec{F} = \vec{\tau}$ to be true, $\vec{r}$ and $\vec{\tau}$ will be orthogonal. Trying to cancel the torque from a point elsewhere will not succeed.

It doesn't matter how many forces you have, you'll add each of the generated torques together and get a single net torque from their addition. To counter this one, we'd need the opposite torque, $(0, 4, -3)$. If your point is orthogonal to it, solve the cross product for the necessary $\vec{F}$.

Not the answer you're looking for? Browse other questions tagged newtonian-mechanics rotational-dynamics torque statics or ask your own question.

2
Calculating torque in 3D?
1
Torque for a door
0
Effect of Internal Forces on Torque
0
Interpreting direction of torque
2
What is the physical meaning of torque about an axis outside the body?
0
Off-axis torque
1
Do we take torque/angular momentum about a point or an axis
0
Confusion about torque and net force
1
How can you take torque about an accelerating point that isn't the center of mass?