Consider conductor with cylindrical cross-section is joined to two semi-infinite planes that form an angle $\alpha$ between them like this figure. I want to find the potential between both planes. 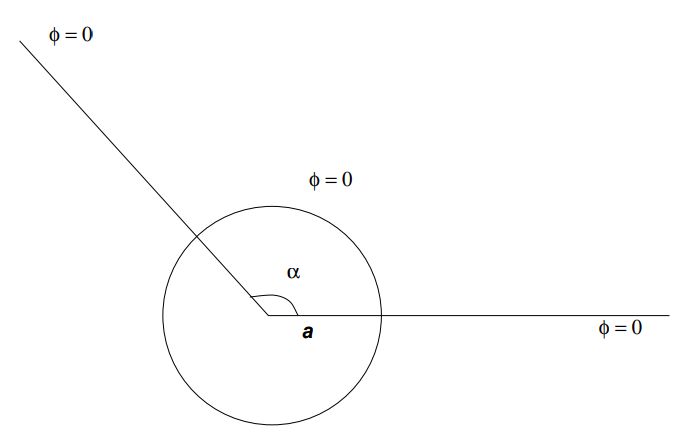 The problem suggests to use the conformal mapping $z_2=z_1^\beta$, which I've never hear before to but I've already read about in a couple of sources (Zangwill and Wesley books on EM). Apparently this should allow me to transform this problem into an equivalent problem which is easier to work.

For example, if I only begin with Poisson's equation in polar coordinates:

With the boundary conditions $\phi(\theta=0)=\phi(\theta=\alpha)=\phi(r=a)=0$. Assuming the charge density for a cylinder is constant, we can solve for the potential:

Which is very hard to solve (since I can't even use Green functions due to the boundary conditions).

Now, I'll try to use the conformal mapping suggested, I can start by setting:

Or even simpler, in polar coordinates:

If $\beta<1$, the angle between the planes decreases and the radius of the cylinder shrinks.

If $\beta>1$, the angle between the planes increases and the radius of the cylinder is enlarged.

However, in both cases, I don't see how making such a conformal mapping makes the problem easier, as I'm only changing the angles and I'm still with the problem of finding the potential between two planes and a cylinder.

The only thing I can think would be better is choosing $\beta=\pi / \alpha$ such that the planes in the new mapping form a straight line like this: 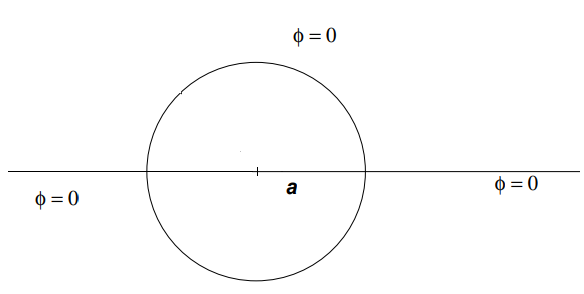 Which I could potentially solve using the analogy to the case of a sphere in an uniform field, but I'm not sure if this is valid. Assuming it is valid, would that mean that, once I find the solution to this problem in terms of $\rho$ and $\phi$, I just work backwards the mapping to find the solution to the original problem in terms of $r$ and $\theta$?

The examples I read in the literature only dealt with mapping planes to planes or circles to circles and left the solutions only for the new mapping, so that's what I find this topic a bit confusing.

Browse other questions tagged homework-and-exercises electrostatics potential or ask your own question.